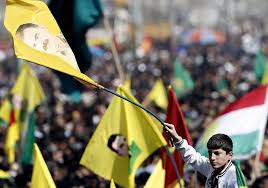 Öcalan saluted the people of Kurdistand and Turkey as well as all of the people of the Middle East in this which is the New Year Day… Öcalan said: To all those friends whose heart is ablaze with the fire of Newroz for peace and freedom! Merhaba! I greet our people who have transformed the […]

To all those friends whose heart is ablaze with the fire of Newroz for peace and freedom! Merhaba!

I greet our people who have transformed the Newroz fire into an awakening and a festival of democracy in Mesopotamia, the cradle of civilisations.

I convey my love through you to all the youth and women of the country.

I call on all those whose heart has room for peace and hears our voice, to all Turkey, to unite in the spirit of the solidarity of centuries.

I celebrate the festival of the fraternal peoples of the Middle East and Asia that have nourished the history of civilisations.

I send you all heartfelt greetings: Merhaba!

A year ago at Newroz we extinguished the fire of war that destroyed young lives and loves, and ignited a great torch of resurgence for peace.

History has shown us that unless there is a determined vanguard of peace, historical problems will generally continue to evolve with serious losses. The most critical question confronting us is this: are we to continue with recurring coups, or else to choose the path of a whole, radical democracy?
The current period which we have gone through since last Newroz exactly expresses this parting of the ways. Either the despotic 200-year-old regime based on capitalist modernity will restore itself to power, or this will be ended by a system with a genuinely democratic constitution based on historical Turkish-Kurdish relations which implements comprehensive democratic reforms. All other stop-gap measures and temporary fixes have completed their life spans.

“The process of dialogue that continued until today was important and witnessed both sides testing the other’s goodwill, reality and genuinity. Both sides have passed this test with determination despite the government’s delaying practices, and running the process one-sidedly, avoiding the establishment of a legal ground”.

“Processes of dialogue are important but they still do not achieve binding. This is the reason why they cannot ensure sufficient guarantee for a lasting peace. At the current state of affairs, it has become unavoidable to form a legal frame for the negotiation systematics.

Peace is more difficult then war, but in every war there is peace. We were not afraid while resisting and we will not be afraid while making peace either.

Our resistance has been against the hegemonic system of denial and cruelty that ignores and kills, not against our brother peoples.

Therefore, our peace serves not governments or states vut the peoples of Anatolia, Kurdistan and Mesopotamia that internalize the thousands of years old ancient values of these lands and the world’s cultural heritage. The government and state are responsible for developing seriousness in line with this truth.

Our great journey to peace has been subjected to numerous cruel approaches and attacks from Oslo to Paris, from Gever to Lice and KCK operations. It is this movement, i.e. you, who are defeating all these dirty games, shaking the dominance of the International Gladio and will make it fail.

The struggle we have been waging has a great role in the inactivation of the systems of protection in the entire region. It is our historic responsibility to pay the required attention against the international conspiracies that we face in various shapes. On the other hand, an amenable language and approach will not only defeat a number of racist psychological methods of war but also be the main character of our great peace.

This peace will become stronger only through democratic constitutional resolutions in the entire region, Rojava in the first place.

Bearing the great potential of freedom and equality they have gained, women will be the major bearers of this peace with the new ethic and esthetic values they have added to the democratic social development.

Our movement started out as a youth movement and it has always remained young. It will once again be the youth that will persistently defend peace against the attacks and provocations targeting peace.

Our people dispersed around the world, Europe in particular, will be our voice to speak out peace and a dignified free life to the world.

All our comrades who have unblinkingly given their life, health and freedom and displayed an unprecedented will everywhere where hopes faded will be the basis of our struggle.

Bearing the thousand-year-old advanture of brotherhood, the peoples of Turkey will be the most efficient answer to racist, discriminatory, disparaging and blood-smelling discourses.

I salute all of you with my my revolutionary greetings and confidence in an entirely free and democratic land where all beliefs, peoples and cultures will feel free.

I call on everyone who assumes responsibility for his age and the humanity to be the building stone of our great peace.

I salute all those who take responsibility for the brotherhood of peoples.

Long live the brotherhood of peoples!