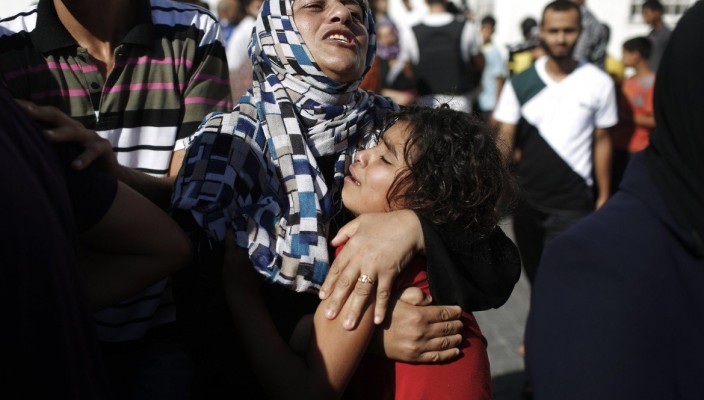 The 14th Night (The Massacre). Diary from Gaza by Najlaa Ataalah

The sky seems to be angry with Gaza, it showers the earth with body parts, that land on pavements and the middle of each street. Normal life has become a distant memory, like a ghost you chase in a dream

How can language help you write down what you witness with own eyes but don’t understand? How is it possible to carry on putting thoughts on paper and translating how you feel? You are dead. Dead in every intellectual sense of the word.
You may still be breathing because a rocket has yet to split your lungs in two. You may still be able to see because your head hasn’t been dashed against a wall yet, from the force of an mortar explosion.
But you are dead.
The sky seems to be angry with Gaza, it showers the earth with body parts, that land on pavements and the middle of each street. Normal life has become a distant memory, like a ghost you chase in a dream.
But everyone in the dream is dead, even you are; it’s just your body has yet to join the others in the morgue.
There is no likelihood of staying alive.
You can’t speak, or look at anyone in the eye, or even listen to the news on the radio.
You don’t know where you are.
Are you a dead body at the side of the road?
Or, are you lying on the floor of the hospital waiting for burial?
Or, are you injured perhaps and the ambulance men have not yet been able to reach your still-breathing body?
Or, are you on a stretcher waiting for the amputation of one of your limbs?
You lack the strength to open your eyes or move any part of your body.
The only words in your heart are simply, ‘Oh Allah are You with us?’
You stop in your tracks, suddenly realising that you have now been running and staggering for over two kilometres, carrying two small children, one in each arm. You look left and you look right, but no one is around. You look down at yourself to see the blood covering all of your body, yet you can’t work out if you’re injured or not.
You smell explosives, smoke and blood. Your face is moist and you ask yourself, ‘Where am I? Why are we alone?’
We were all together. Where did they go?
‘Where did they go? Did I run and leave them behind?’
‘How could that I left my mother? Why did we become separated?’
The hospital is full of the dead and the wounded. When you arrive at the entrance to it you set the two children down on the ground and look into their eyes and ask, with a smile, ‘How did we managed to get out of that?’
You never woke up, even when you saw all the people streaming out of their homes, like successive waves of the sea, scrambling, crying, terrified of leaving behind a single soul for the artillery to target.
You never woke up, despite hearing the sound of the first shell breaching the front wall of the kitchen upstairs, and the whizz of different pieces of shrapnel ricocheting around the house; in a trance of panic you simply ran off in any direction, just like everyone else, trying in vain to make out any human voice above the sound of the artillery.
You never woke up, even when your mother fell to the ground, unable to carry on, screaming: ‘Take the kids and run.’
Instead, you simply ran, as fast as you could, dodging artillery fire, holding the children tight to you under each arm. You cared about nothing, you couldn’t smell the explosives, the diesel, the gunpowder, the smoke that darkened the sky all over Shojae’ya. You could not hear the sound of the missiles raining down on the people throwing their emptied bodies into the road.
You kept running until you reached this hospital. And now, finally, you set the two children carefully on the ground, staring at them, still dazed. You lean in close to them, touch their faces, gently shake their arms, and ask them out loud ‘Why are you still asleep? We are here. We managed to get out!’
Unlike you, now, they they don’t wake up, and they cannot answer you..

Najlaa Ataallah was born in 1987 and is a Palestine writer based in Gaza. She has a BA in Architectural Engineering, which she obtained from the Islamic University in Gaza in 2010 and is currently writing a Masters thesis in Engineering Project Management, at the same university. Whilst still in secondary education, she won numerous prizes for her writing including an award for Best Play from the Holest Cultural Centre. She published her first novel I Loved Her So at the age of fifteen, and her second novel, A Cup of Coffee was published by the Palestinian Ministry of Media. Her Young Adult novel The Photo was listed as one of the best 100 books in the Arab world in 2009. Her debut short story collection, Croke (2012) was the winner of the Najati Sidqi Competition in Ramallah, presented by the Palestinian Minister of Culture. In 2013 she participated in a short story festival in Morocco, representing Palestine.