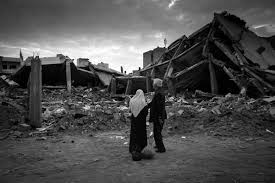 Without Words. Diary from Gaza by Mona Abu Sharekh

At the beginning of Israel’s current offensive against Gaza, I decided to start a diary, believing that words could make a difference. Then, after the Shajayya massacre, I stopped writing, and indeed talking, altogether.

At the beginning of Israel’s current offensive against Gaza, I decided to start a diary, believing that words could make a difference. Then, after the Shajayya massacre, I stopped writing, and indeed talking, altogether. The images of dead women and children lying in streets broke my heart. Thousands of families fleeing from their homes. The corpses of their dead relatives simply abandoned – their ties to the living not strong enough to keep them there, and risk their lives a second longer. These images shocked me into silence, for several days.
I was dumbstruck. The holiest of all questions is all I ask: Why?
I am staying in a safe place – in the middle of Gaza. ‘Safe’ here means that only ten or so houses in the neighbourhood have been hit by F16s so far. One of them was on my street, another two houses nearby, the local mosque and the national bank were also attacked. Despite the incessant sound of the bombs, the constant shaking of the earth with every blast, nothing makes me feel that death is close to me and my baby boy more than the smell last night of gas.
There is no light. Power was cut here several days ago. I have heard no news. I am keeping this as my laptop battery is running low.
If I get to send this it means the power must have come back on, at some point. I haven’t slept a single night since the beginning of the offensive. All day I pace around the middle my room; I don’t feel well. I can hardly breathe in fact. I think that I have something wrong with my lungs. Suddenly, after hours of hearing nothing, my sister calls me. In a instant I’m horrified to see her name on the phone’s screen. Why is she calling now? It has to be bad news!
I can’t help but relax as she tells me that an Israel airplane has thrown combat gas all over my neighbourhood. How am I supposed to feel? Happy because everyone is still alive for now, or sad because I am one step closer to death, along with all my relatives?
This is just one hour in the middle of one night in Gaza. I’ve stopped being afraid of dying by rocket attack, a friend of mine told me that you don’t hear, see or feel the rocket that kills you. But with gas, it’s different, you hear death whispering harsh words in your ears, and you can’t do anything but listen.

Mona Abu Sharekh’s family was originally from Ashkelon (her father being expelled from his land in 1948). She studied English Literature at Islamic University of Gaza from 2001 to 2005, then took a Masters degree in Business Administration at the same university. Her first collection of short stories, What the Madman Said was published in 2008 by the Palestinian Writers Union,and deals with life in Gaza shortly after the second intifada (2006-2007). She has recently completed her second collection, about Palestinian women, When I Cut Off the Head of Gaza, and she is currently working on a novel, about children abandoned for the shame of being born out of wedlock. She has worked as project manager for a number of Palestinian NGOs, and her writing frequently draws on her experiences of social work.