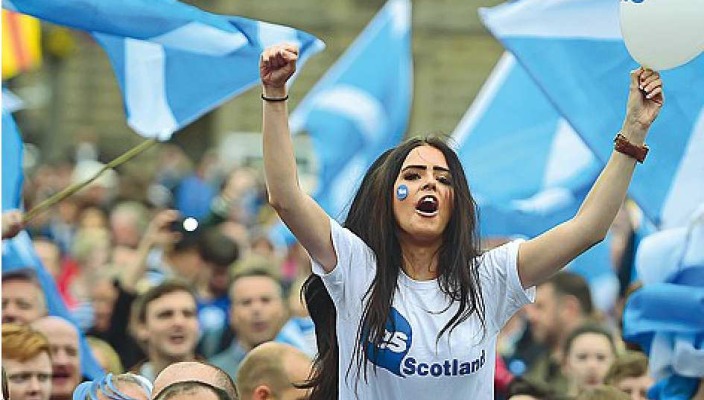 Scottish voters have gone to the polls to decide whether they’ll become an independent state. A record 97 percent of residents, or 4.2 million people, are registered to vote in a referendum which could have major repercussions for Ireland

Scottish voters have gone to the polls to decide whether they’ll become an independent state. A record 97 percent of residents, or 4.2 million people, are registered to vote in a referendum which could have major repercussions for Ireland.

More than 2,600 polling stations will remain open from 7am until 10pm British time. Results will start being announced at 2am. Aberdeen is expected to be the last to declare, at 6am.

Some of Scotland’s regions are extremely remote, however, and votes will be transported to counting centers by helicopter and boat, meaning bad weather could delay results.

Polls in the last days of the campaign indicated the result should be close. The ‘Yes’ campaign remains the underdog despite being widely backed to win in Scotland, while English bettors have gambled on the opposite result.

The prospect of the country becoming independent will require the relocation of the Trident nuclear weapons and a new deal being forged between England and Scotland on the exploitation of North Sea oil, the sharing of national reserves, as well as other monetary, financial, and fiscal arrangements.

The campaign ended with the a series of bizarre English interventions on behalf of the ‘No’ campaign. The English queen, Elizabeth Windsor, ominously warned Scotland she “hopes voters think carefully”, while Irish ex-pat and former rock star Bob Geldof made a speech to a Union-Jack waving crowd in London praising the UK while condemning Scottish nationalism as a “feeling”.

An energetic campaign reached its climax this week without real trouble, although a small number of Union Jack-waving ‘No’ campaigners last night made Nazi salutes and hurled abuse at ‘Yes’ campaigners in Glasgow.

Thousands had gathered in support of Scottish independence in the centre of Scotland’s most populous city, where the turnout could decide the referendum.

The two-year-long debate has been hailed as an exemplar for other national struggles and has only been marred in recent weeks by a frenetic disinformation campaign by the London-based establishment.

While the polls have indicated both sides are almost equally supported, virtually all of the mainstream media in Britain has sided with the unionist cause. Some have attempted to incite fears of an uncertain future, while other have emotively used their front pages to issue daily appeals to a sense of Britishness, featuring pictures of dead soldiers, English royalty and appeals to reject by popular English celebrities.

However, last-minute promises by British Prime Minister David Cameron of increased devolution powers for the Edinburgh assembly has provoked an angry response in London, as MPs and the English public alike condemned the idea.

Cameron’s Deputy Prime Minister, Lib Dem leader Nick Clegg said it was ‘simply not fair’ to hand powers to Scotland without further reducing Scottish MPs at Westminster. And in events with a parallel in Irish history, a number of Tory backbenchers openly said they would never back ‘Devo Max’, a form of Home Rule for Scotland.

He closed his campaign last night at a packed rally in Perth, where he told supporters the referendum is “our opportunity of a lifetime and we must seize it with both hands”.

The SNP leader declared: “This opportunity is truly historic. There are men and women all over Scotland looking in the mirror knowing that the moment has come. It’s our choice and our opportunity and our time.”

He added: “We are still the underdogs in this campaign, each and every one of us has a job to convince our fellow citizens to vote by majority for a new dawn for Scotland, for that land of prosperity but also of fairness.”