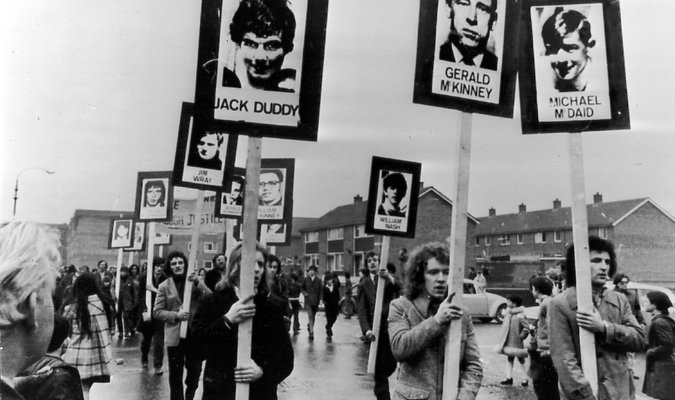 The police in Northern Ireland arrested a 66-year-old man on Tuesday in connection with Bloody Sunday, the infamous massacre of unarmed civilian marchers by British soldiers in Londonderry on Jan. 30,

LONDON — The police in Northern Ireland arrested a 66-year-old man on Tuesday in connection with Bloody Sunday, the infamous massacre of unarmed civilian marchers by British soldiers in Londonderry on Jan. 30, 1972. It was the first time anyone has been arrested in the massacre, for which the British government formally apologized in 2010.

The former soldier, whose name was not released, was arrested in County Antrim and taken to a police station in Belfast for questioning. The BBC reported that the ex-soldier was a former lance corporal — identified in a 2010 report by the pseudonymous initial “J.” He is believed to have been involved in three of the 13 killings that day. A 14th victim died months later.

Forensic teams Sunday outside a base northwest of Belfast in Antrim, Northern Ireland, where two British soldiers were killed.
Lance Corporal J was a member of the Parachute Regiment, the Army unit most hated by Catholic nationalists during the Troubles, the 30-year struggle over the status of Northern Island. Five months before Bloody Sunday, members of the regiment fatally shot 11 unarmed civilians in Belfast. In retaliation, the Irish Republican Army blew up the regiment’s base in Aldershot, England, in 1974, killing seven people.

The Troubles, which claimed 3,600 lives, largely ended with the 1998 Good Friday agreement, when paramilitary groups like the I.R.A. agreed to cease hostilities and the governments of Britain and Ireland, along with the major political parties in Northern Ireland, agreed on a complex set of power-sharing arrangements for the British territory.

In 2010, after a 12-year, $283 million investigation, a government inquiry led by an eminent jurist, Lord Saville, found that “a serious and widespread loss of fire discipline” had allowed the massacre to take place.

The report, which exceeded 5,000 pages across 10 volumes, exonerated the victims, concluding that the soldiers had fired the first shot and had given no warning before opening fire. Some of those killed or wounded, the report found, were either fleeing or trying to help other victims.

The report refuted the findings of an earlier inquiry, conducted immediately after the massacre by a former Army officer, Lord Widgery, that had largely exonerated the Army and attributed the killings to armed protesters who it said had provoked the attack. That inquiry has come to be seen as a whitewash.

“What happened on Bloody Sunday strengthened the Provisional I.R.A., increased nationalist resentment and hostility toward the Army and exacerbated the violent conflict of the years that followed,” the Saville inquiry found. “Bloody Sunday was a tragedy for the bereaved and the wounded, and a catastrophe for the people of Northern Ireland.”

In response, Prime Minister David Cameron apologized for the massacre, calling it “unjustified and unjustifiable.” The next year, the government agreed to a plan to compensate families of the victims.

The Saville inquiry found testimony by Lance Corporal J and two other soldiers — who testified that they had opened fire on men they believed to be armed — to be “knowingly untrue.” The three soldiers were believed to be involved in the deaths of Michael McDaid, 20, William Nash, 19, and John Young, 17.

“We are sure that these soldiers fired either in the belief that no one in the areas toward which they respectively fired was posing a threat of causing death or serious injury, or not caring whether or not anyone there was posing such a threat,” the report found.

John Kelly, whose brother Michael, 17, was killed on Bloody Sunday, welcomed news of the arrest. “All of the families of the victims are very excited by it: this is the first and we expect all of the rest of those responsible to be brought in and prosecuted,” he said.

Marc Mulholland, an associate professor of modern history at Oxford, said the 2010 report was “universally seen as fair-handed and comprehensive,” but left open the legal and moral question of whether individuals should be held culpable.

“It is an episode that is universally known in Northern Ireland, and its resonance echoes down the years,” he said in a telephone interview. “So some people will wonder why it’s taken so long for someone to be held to account. On the other hand, there will be those who feel the arrest will reopen, yet again, an episode that should be closed by now. Lots of people have had to bear pain, see killers of friends and family walk the streets again after 1998. Should we be going down this path?”

Brian Conway, a sociologist at the Maynooth University in Ireland, said he was not surprised by news of the arrest, which he called “part of a wider attempt to heal the divisions of the past.”

The arrest was made by the Legacy Investigation Branch, a unit of the Police Service of Northern Ireland established last December to examine old cases. In a statement, the police quoted the officer leading the investigation, Detective Chief Inspector Ian Harrison, as saying that “today’s arrest marked a new phase in the overall investigation,” which he said could “continue for some time.”

Also on Tuesday, after an investigation by the same unit, a former British soldier, Dennis Hutchings, 73, was charged with the attempted murder of a mentally disabled 27-year-old man in the hamlet of Benburb in 1974. The man, John Pat Cunningham, was shot in the back as he ran from an army patrol. The British government apologized for his death in 2013.