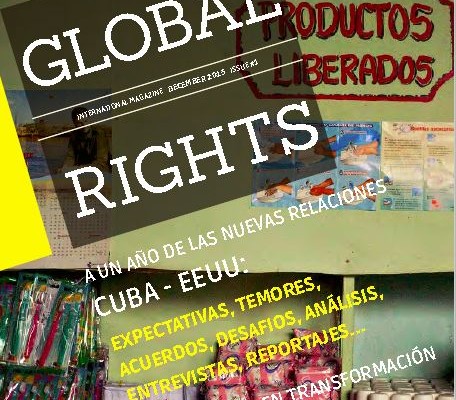 Together with the government and guerrillas delegations, 10 victims of the Colombian war are in Havana for signature of agreement

New issue of Global Rights dedicated to the new relation between Cuba and the US out tomorrow. Watch out: www.globalrights.info

This winter issue of Global Rights is dedicated to the new relations between Cuba and the United States. It has been a year since Cuba president Raul Castro and US president Barak Obama have announced, in a simultaneous press conference in Havana and Washington, the beginning of new diplomatic relations and public talks.

After more than half a century of aggressive politics carried out by the US government against the Cuban Revolution, the declaration by the two presidents marked undoubtedly the beginning of a new era, and not only in the relations between the two countries but also in the repercussion these new phase will have on the regional geopolitics and as well as at international level.

In this issue of Global Rights we have tried to offer the readers tools to read this past year. All articles have been written by journalists, intellectuals, academics living in Cuba. This provides readers with an opportunity to glance inside this island from a window or rather windows, which do not pretend to be exhaustive but only the beginning of a longer and continuous analysis on this new era.

This issue is monographic, but deeply embedded in the more global context. Therefore the editorial Defeating the Monster, by Global Rights editor Sergio Segio, is an analysis of the world after the attacks in Paris and the downing of a Russian plane by Turkey.

Segio underlines that “a global war is taking place”. Something not new, but perhaps, he argues, the attacks in Paris have “finally shaken the world and public opinion, showing at least part – a small part – of the effects of this global war”. A mix of ingredients are at the base of this global conflict and it is necessary to read and understand the relationship between the various ingredients to get the full picture and be able to answer to it.

The States’ answer is clear and so are its consequences: the choices made “not only appear as an emotional reaction: they are rather a step in the construction of the state of exception, a strong acceleration of the compression of freedom of dissent, criticism and protest, through a Patriot Act declined to French and thanks to constitutional amendments promptly introduced in the direction of a post-democracy”. Sergio argues that the monster can be stopped only from the bottom, through “a recovery in global movements for peace, climate justice, coexistence and social justice”.

Stepping in this past year and what it meant for Cuba and the US, is done through an analysis, which is a balance of this 12 months. JM Arrugaeta and O. Casagrande try to see both the half part of the glass as well as the full. The latter includes some symbolic acts, like the opening of the two embassies and the determined will shown by both governments to really engage in talks on a quite full agenda. Collaboration and agreements are sought in areas such as immigration, medicine, trade, communication, cultural and education exchanges.

The economic risks and advantages are analyzed in the article “Economy as main challenge”. No doubt, the main challenge for Cuba is the building and implementation of an economic model aimed at rising the level of life of its people, particularly salary rise, social consume and development. This should reflect on the perception of the collective good.

Inevitably immigration is an important part of the analysis on the Cuban situation. Indeed the “crisis” of some 5000 cubans stuck in Costa Rica and heading to the US (where a special law grants them permit staying and possibility to work, something almost unreachable for other migrants from the region) as open the Pandora Box of a relation based on trying to “defeat the enemy”. The article Emigration, the bleeding wound, offers figures and legal framework to understand what is going on and what are the challenges for the Cuban government.

Felix Julio Alfonso Lopez introduces us the “challenges of a peculiar intimacy”. Briefly leading us through the history of these tormented relations, Felix Julio underlines which is necessary and convenient to maintain civilised relations with the powerful neighbour and that the aggression still present in various forms must be ended, through dialogue and talks. This is not and must not be leading to the “oblivion” of more than half a century of us aggression and the independence and sovereignty of Cuba. This – argues the author – would be a serious mistake the future generation will have to pay.

Mati Echevarria leads us through the coloured and lively streets of Havana. The cuban society finds itself in the middle of a change process. Sometimes these changes are almost invisible, others they are so visible they almost scare. New thoughts, new aspiration go hand in hand with a social and economic redefinition or modernisation. The Cuba of the future is being imagined, thought, made. The outcome not clear.

A photo reportage by Mauro Guglielminotti closes the first part of this reach issue and opens the second. The photos are of Havana and its people, Santa Clara the day of the birthday of the leader of the Revolution, Fidel Castro Ruz.

The second part opens with a feature by Orsola Casagrande on her way to Bejucal on the “mythical P16”. A portrait of people and their daily struggle  (and creativity) to cope with difficulties and shortages. A different reality from that of the capital, different relations and a strong community link.

Fernando Martinez Heredia argues in his article that the day the US embassy opened in Havana was not a historic day, but rather a “relevant day”. Through the analysis of symbols and events, Heredia underlines that as long as the majority of the people participate in politics, then it would produce initiatives and generate formulas able to contrast US pretension. Because – he says – in the revolutions the people is always crucial.

Another angle, another glance from a different window to the Cuban reality. Fernando Ravsberg asks whether the government and the Communist Party would be a the vanguard of society.

If the Cuban economic reforms remind Ravsberg of the rivers gaining strength and an autonomous life as they flow down the mountain, he stresses that likewise it is impossible to impose a predetermined rhythm to the changes. The government, he says, seems willing to avoid improvisation in the economic field and yet finds it difficult to progress slowly keeping control of the general changes produced in the society. Ravsberg claims that to be vanguard means to be in front of the rest of the troops, always knowing where we are heading to.

Not only politics, we could say. Indeed Felix Julio Alfonso Lopez introduces us in the sport world of Cuba and the US, and more specifically in the world of baseball, which unites and separates the two countries. Because this game is present in the building of sense of identity and belonging for more than 150 years in both countries.

This issue is closed by the reproduction of part of an interview with Josefina Vidal, director of relations with the US in the Cuban foreign affair ministry, carried out by the daily paper Granma. In it, Vidal explains the challenges, opportunities, difficulties of this new relation.

Sergio Segio, writer. He is co-directing Global Rights with Orsola Casagrande. He is the creator and coordinator of the Report on Global Rights. He has directed the Association SocietàInFormazione Onlus since 2003. He is the author of the books Miccia corta (DeriveApprodi editore) and Una vita in Prima Linea (Rizzoli). Based on the issues addressed in the Report on Global Rights, he has written the theater works: Dormono, dormono sulla collina (2008) e Last minute – Cronache dal mondo diseguale (2009). He has worked for over 20 years with the association Gruppo Abele.

Orsola Casagrande, journalist and writer. Worked for 25 years at the paper il manifesto. Now freelance, she co-direct Global Rights with Sergio Segio and writes for La Directa, Rebelion, Berria, Ozgur Gundem. She is currently editing with JM Arrugaeta the “Book of Havana”, a collection of 10 short stories by 10 Cuban writers for English publisher Comma Press.

José Miguel Arrugaeta, journalist, writer and historian. Lives in Cuba. He is author of a book on Cuba and editor of a selection of writing and speeches by Fidel Castro. He writes for La Directa, Rebelion, Berria, Global Rights and Ozgur Gundem. He is currently editing with Orsola casagrande the “Book of Havana”, a collection of 10 short stories by 10 Cuban writers for English publisher Comma Press.

Felix Julio Alfonso Lopez, historian and vice-dean of the San Geronimo College (History university) in Havana. He is the author of many books and essays on Cuba.

Mauro Guglielminotti, photographer and photojournalist from Turin (Italy). Based in Paris has traveled the world telling stories often not told. With Orsola Casagrande has co-edited the book “Istanbul” and has published, among others, works on Ireland, Palestine, Turin.

Fernando Ravsberg, uruguayan journalist and writer. Has worked for Radio Sweden and BBC. He has a blog, cartasdesdecuba.com

Fernando Martinez Heredia, Cuban writer and academic. He is the director of the centre Juan Marinello.

Mati Echevarria, journalist and writer based in Latin America. Travels around this area sending reports and features to several basque and spanish language newspapers.