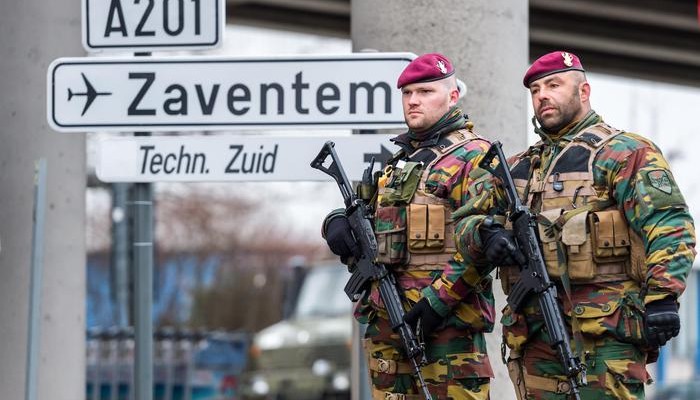 The keyword after the jihadist massacre that hit Brussels, causing 31 dead and 230 wounded, is: “sealing”

The keyword after the jihadist massacre that hit Brussels, causing 31 dead and 230 wounded, is: “sealing”. In the immediate future, sealing the theater of the attacks, in the hope to catch the perpetrators who may have survived. More generally and later on, it would mean sealing the European suburbs, where the followers of the Islamic State prove to have protective nets, logistic background and areas of consensus.?As you do with viruses, you would want to isolate the healthy society from the deadly contagion. Evil besieges the city gates. Indeed the gates of civilization. The healthy carriers of this virus would be the refugees, whose biblical exodus transfer to Europe also fanatics fighters and foreign fighters coming back “home”.? Sealed must be the borders so to confine the problem, behind generous compensation, in that very Turkey which aspires to quickly join the European Union, but without renouncing to massacre Kurdish populations, imprison journalists and opponents, traffic arms and oil with Isis, expand territorially, participating to the future partition of Syria. Partition to which, of course, aspires and wish to participate, perhaps most of all, the Islamic State. Brussels attacks constitute an act of positioning in this new phase of international standoff, nothing to do with an act of revenge for the arrest of Salah Abdeslam, as some Sunday analysts hypothesized.? Sealing off, close off the barbarians. This is the message, the image and the suggestion that many commentators shout out through mainstream megaphones and that European governments translate into walls of barbed wire and shameful agreements with Erdogan.

“It is not time for dragons and neither for doves,” said Italian Prime Minister Matteo Renzi, adding weird considerations about possible similarities with the Red Brigades, and  even with the Mafia.?It means, then, that the time of the hawks continues, the time of those have already led Europe and the whole world in the dead end of the spiral war-terrorism-war, with the addition of the exceptional state, as in France.?The time of the arms to sell Saudi friend continues. The time of the bombings, air raids, drone and “smart” missiles, which are killing civilians and devastate even hospitals continues. US, Saudis and Turks, who created the monster, rearing in a laboratory the Islamic State, often, in fact, “shoot the Red Cross”, namely Doctors Without Borders and Emergency. Without any protest and no call to account by any institution, and without Lady Pesc dropping some telegenic and timely tear.?The time of divide and rule continues: the break-up of states, beginning with those of the former Yugoslavia to Libya, passing through Afghanistan, Iraq, Syria. Premise of chaos and promise of terrorism, widespread and multiplied.?After the collapse of the Berlin Wall ? that had at least ensured geopolitical balance for decades – thousand walls of inequality and discrimination have been erected, deciding at the table to shatter, suddenly and for cynical and selfish reasons, strenuous multiethnic cohabitation built in decades, if not centuries, of farsighted smoothing hatreds, resentments, claims and differences.

The lucrative profession of arms

In the next day analysis (after Paris and after Brussels, because these are the only massacres shocking and provoking the indignation of western public opinions), there is no commentator or political leader who has had the lucidity, common sense and the courage to point to the source of the problem: the war, the system of war, the multinational military trade, the warfare that has replaced the global political governance. States fail because politics has failed, abdicating in favour of big business of the multinational system i.e. of the first responsible of the global crisis.?In these analysis, the complexity (and the many intertwined roots of terrorism: historical, social, economic, identity, religious, cultural) is not investigated nor understood, and it is trivialised in prevailing moral considerations or arbitrarily generalised (terrorism is evil, Islam and its followers are the deadly and implacable enemy of the West).?Conversely, an obvious question, indisputable and simple, just like the spiral dynamics triggered by the Western strategy, built and launched by George W. Bush with the complicity of Europe, the “endless war” and “humanitarian interference”is hidden, buried behind the smokescreen of the clash of civilizations and of ” orianafallicism”.?We are at war, they say now. As we were not always been: in the last century for reasons of colonies and at present for the same reasons: to share resources and territories, taking advantage of the end of the order of Yalta. Which was also to share, – certainly – but capable of securing peace, or at least a cold war, lukewarm at best and not that bloody.?If that had built an Iron Curtain, forged by deprivation of liberty for a block, the new world order built and multiplied other insurmountable walls of blood-mixed bricks and has involved the whole world in a state of growing and permanent belligerence, in a new form of “liquid” world war.

We are at war, as if there were no ongoing conflicts in Afghanistan, Iraq, Libya, Syria, Yemen, Central African? in some cases for decades as in Republic, Democratic Republic of Congo, Nigeria, Sudan, South Sudan, Ethiopia, Mali, Somalia…; not to mention the barely dormant war in Ukraine or that eternal in Palestine. As Italy itself had not military missions underway in Afghanistan, Kosovo, Lebanon, Mali, Somalia, Iraq and Libya ? some indeed going on for many years – where indeed there are pressure to get to a full and real war, with the “boots on the ground” and Italian generals finally in charge.?We are at war, yes. For a long time, having had to painfully learn only recently that war, sooner or later, carries victims even in your own field. Victims who, unfortunately, are always civilians, unlike those who have created the conditions for having victims on both sides. Sorcerer’s apprentice and war profiteers. The dress of the hawk disguises in fact the essence of the jackal.? That all this were not inevitable it was well shown by the agreement with Iran, in a short time transformed by the West, and the US in the first place, from “Evil Empire” to potential ally, despite stiff opposition and the risk of breaking with the old ally, Israel. Likewise the ongoing dialogue between the United States and Cuba, considered and treated for half a century as a bitter enemy to besiege and starve shows the same, with the West now opening, not for noble ideals, but especially because it hopes to do good business there.?The fact that war can always be ended, if there is the political will, has been confirmed in recent months by Colombia: the “terrorists” of the FARC and the peace table between guerrillas and government representatives are under way in Havana, have received a few days ago an official recognition with the visit of US Secretary of State John Kerry, in utter distraction and silence of the mainstream press, which cannot admit that the enemies of yesterday have become today’s political interlocutors, and that, therefore, perhaps there were not “terrorists” but a belligerent party to a conflict that now, finally, all want and can solve.

The roots of hatred

“To avoid the trap of the jihadist recruitment in Europe it was necessary to intervene ten or fifteen years ago,” said Tahar Ben Jelloun, commenting on the tragedy in Brussels. According to the writer, what the Parisian banlieue or boroughs such as Molenbeek reveal is a social apartheid condition, where inevitably “crime, extremism and religious hatred take root”.?The war, however, is always a reversible choice and even fanatism can be defused; sever those roots is relatively easy, social and integration policies are also infinitely cheaper, economically wise, than military ones.?It is possible, as long as word and decisions go back to politics (for too long in fact they have been expropriated by large financial, military and energy corporations).? Paraphrasing Karl Von Clausewitz, politics is the continuation of war by other means. And with different objectives.?Just saying enough to war, to its system and its supply chain, we could resolve the tragedy of terrorism and also, for the most part, of migration.

Just saying stop the war, Europe can avoid the disruption and the authoritarian and technocratic degeneration that is undergoing.