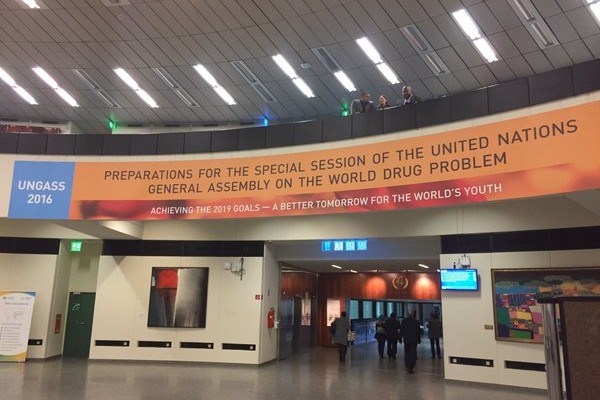 Yes, civil society mobilisation around the UNGASS process has been truly impressive and unprecedented. UNGASSes are a rare occurrence – there have so far been only two, one in 1990 and another in 1998 – and it is therefore a key strategic moment for drug policy advocacy at global level. In fact, NGO engagement in global drug control and the growing momentum in calls for reform among civil society have been exponential.

The last UNGASS took place in 1998. At that time, only a few NGOs were involved in global drug policy. There was also little coordination among them at that time. The International Drug Policy Consortium (IDPC) was created ten years ago, in 2006, for the one purpose of ensuring more coordination and strategic thinking among NGOs interested in international drug control. Already at the High Level Segment in 2009, more NGOs engaged in the process, trying to influence the debates around the adoption of the 2009 Political Declaration and Plan of Action. The “Beyond 2008” initiative facilitated by the Vienna NGO Committee on Drugs was an important moment in the history of NGO engagement in UN drug control debates, highlighting the breadth of the movement and the differing views among NGOs working in the drug policy field.

Coordination among reform-oriented NGOs grew from strength to strength with the announcement of an upcoming UNGASS in 2012. Strategic groups were created to coordinate advocacy interventions, and support a variety of new campaigns which grew out of the need to elevate the voice of civil society – in particular affected groups – in the lead up to the UNGASS. The Support. Don’t Punish campaign, for instance, aimed to call for a re-think on the global war on drugs, promoting instead policies based on harm reduction, decriminalisation and human rights. The campaign mobilised thousands of activists worldwide with its interactive photo project, and especially with its Global Day of Action every 26th June – the UN international day against drug abuse and drug trafficking. The campaign showed that people from around the world could gather under one common message – that of promoting a more humane and less repressive approach towards drugs.

With the UNGASS approaching, the mid-term review of the achievements made since the adoption of the 2009 Political Declaration became a key moment for NGOs to work together to influence the debate. The 2014 High Level Segment was therefore an opportunity for NGOs to test their strengths and build constructive relationships with policy makers as UN member states negotiated the Joint Ministerial Statement. Although the final iteration of this document was disappointing, this exercise was useful in terms of what we could expect from the UNGASS. It was also an important turning point in how much we could achieve as civil society when we worked collaboratively and strategically to influence policy debates at the UN.

Since then, reform-minded NGOs have refined their  strategies to influence both the UNGASS modalities (how the meeting would be held) and the UNGASS outcome document which was finalised last week at the 59th Session of the Commission on Narcotic Drugs (CND). We all worked relentlessly to provide inputs into the UNGASS process, as well as to offer recommendations and language to insert into the UNGASS outcome document. Here again, the end result may seem disappointing, although some gains were made in some aspects – for example in the fields of harm reduction, proportionality of sentencing, alternatives to incarceration or the promotion of a gender perspective. Some UN member states also included some NGOs’ representatives in their official delegation – enabling some civil society partners to be directly involved in the negotiations of the outcome document (which were held behind closed doors!). This is a clear indication that NGO representatives are now considered (at least by some member states) as useful and critical partners in the drug policy debate.

Outside of the negotiation table, the NGO movement has been building too. A number of events will be held in New York at the margins of the UNGASS in April to raise the voice of people affected by prohibition-led drug policies, and to call for drug policy reform. These activities mainly aim to influence public opinion and the media on the need to move away from a war on drug rationale. A full day of activities is planned for 18th April, and here again, this has been planned through an unprecedented amount of coordination among NGOs involved.

The lack of coherence between the human rights and the drug policy mandate of the UN remains a critical issue for many NGOs. At IDPC, we have worked relentlessly to elevate this issue at the UNGASS and ensure that human rights principles be considered as an overarching principle of global drug control. These include the right to life (hence, the need to end the death penalty as a matter of urgency), the right to health (including access to harm reduction and evidence-based treatment), the right to a fair trial, the right to be free from discriminations (in particular for ethnic minorities or for women), the right to be free from torture or inhumane treatment (for example the use of compulsory detention in some parts of the world), and many others.

The UNGASS has been a key moment internationally for these issues to be raised by NGOs, but also by other UN agencies that have so far been silent on the issue of drug control. For example, the Human Rights Council adopted, for the first time, a resolution on drugs and human rights in 2015. This led to the publication of a fantastic report by the Office of the High Commissioner on Human Rights and an expert panel discussion on the issue at the Human Rights Council session in September 2015. NGO experts were heavily involved in both of these processes. CELS (Centro de etudios legales y sociales) or Intercambios for example, were very much involved in the Human Rights Council session. The Human Rights Council panel discussion also included NGO speakers, including IDPC’s Executive Director, Ann Fordham, while the UHCHR used many NGO submissions to draft its report. These contributions were submitted as inputs into the UNGASS process – although, here again, it is very disappointing that they were not taken seriously by most UN member states, and not well reflected in the UNGASS outcome document.

The one issue that made most noise during the negotiations of the UNGASS outcome document was no doubt that of the death penalty. Although this did not make it into the final document, progressive blocks in Europe and Latin America remained strong until the end against Iran, Saudi Arabia, China, Pakistan and others. The EU, on behalf of a number of other countries, presented a declaration at the end of the negotiations process at the CND, regretting that the abolition of the death penalty had not made it into the outcome document. This is indeed extremely disappointing for many of us, but understandable in a context where all decisions on international drug control are taken by consensus – meaning that any final document will not include any contentious issue and that most of the text will end up being vague and clumsy to satisfy the sensitivities of each UN member state.

The Civil Society Task Force (CSTF) – the official mechanism for NGO engagement at the 2016 UNGASS – constitutes a key aspect of NGO engagement to influence the debate at the UNGASS. The CSTF is composed of a number of NGOs representatives of regions, affected groups and various ideologies. It has been instrumental in promoting the voice of NGOs in UNGASS preparatory segments, in proposing speakers and in organising informal civil society hearings and the 10th February Informal Interactive Stakeholders Consultation in New York. I encourage all those who have not yet done so to read the strong and powerful report of the Consultation, drafted by the President of the General Assembly. This report is an important NGO input into the UNGASS consultation.

The “Support. Don’t Punish campaign”, coordinated by IDPC, is also an interesting example of mobilisation around the need to review drug policies worldwide. Launched in 2013, the campaign aimed to call for harm reduction and the decriminalisation of people who use drugs. The 2013 Global Day of Action included 41 cities. In just a few years, the campaign has grown exponentially in size and reach. In 2015, the Global Day of Action counted with the involvement of thousands of activists in 160 cities worldwide. With the UNGASS fast approaching, the 2015 Day of Action had a strong focus on the Special Session. This is just one example of a global campaign that enabled many activists, including affected groups of people who use drugs to unite, reach out to the media, influence public opinion, and open or consolidate a constructive dialogue with their policy makers.

At European level, I am a member of the Civil Society Forum on Drugs (CSF) – the official mechanism by which European NGOs can discuss drug policy with European Union (EU) institutions. I am now the chair of a working group focused on the EU relations with international institutions – which means that the UNGASS was a key focus for our work this year. Through that mechanism, we offered detailed guidance and recommendations to the EU throughout the UNGASS negotiations processes. The EU is always a complicated body to influence as it is composed of 28 member states with very different opinions on drugs issues. However, this was an interesting opportunity for the 45 members of the CSF to work together and provide inputs into the EU positions around the UNGASS.

The UNGASS outcome document has now been adopted by the CND in Vienna. Because of diplomatic sensitivities, it is unlikely that member states will reopen the document in New York – although it is still a possibility. In terms of NGO engagement, there is little now that can be done in terms of influencing the document. We worked very hard throughout the negotiation process to provide inputs into the draft, offering UN agreed language to support the negotiations, and facilitating dialogues between member states and NGO experts.

The outcome document is nowhere near as strong as we had hoped it to be, but some wins were made. Overall, we must remember that the UNGASS is much broader than the outcome document. We are now turning towards the UNGASS roundtables and thematic debate to ensure that the discussions reflect the need for an approach based on health, human rights, development and human security, and that the voice of NGOs is heard within and outside the UN building in New York.

One of the key outcomes of the UNGASS is a reflection of the fact that the Vienna Consensus is now broken – there is a clear division between UN member states on global drug control. We are now far away from the unifying slogan of the 1998 UNGASS “A drug-free world, we can do it”. Although some member states continue to promote this approach, it is evident that many others are now firmly promoting a more pragmatic, less repressive approach. If the reports of the UNGASS roundtables adequately reflect this new situation, it will be a win for us.

Another outcome of the UNGASS we have been pushing for would be the establishment of an expert advisory committee which would be tasked with revising the tensions between the UN drug conventions and reforms happening on the ground – in particular with regards to cannabis and the coca leaf. This proposal has unfortunately not made it into the UNGASS outcome document, but this is something that we – and a number of UN member states – will continue to promote until the end of the UNGASS.

For more information about this, I encourage you to have a look at this blog post we have just published on the UNGASS wins and failures.