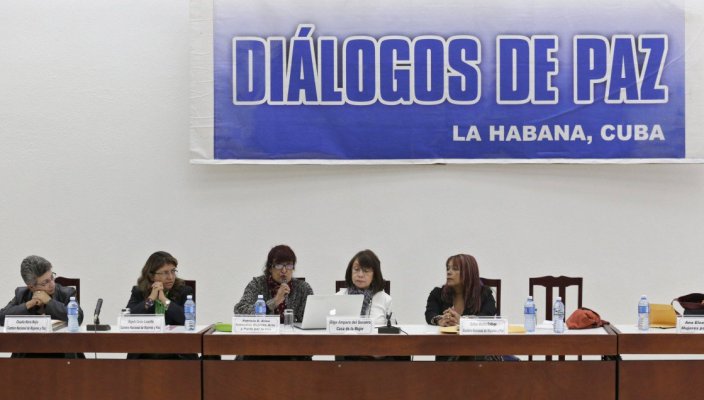 The Long Road to Peace

Colombian Senator Ivan Cepeda has spoken recently about the latest violence by paramilitary groups and the call made by senator, and former President, Alvaro Uribe for a “civil resistance” against the Peace Agreements between the FARC and the Colombian government, saying that “the undeniable progress in the Peace talks taking place in Havana has raised concerns in some political sectors”. Cepeda underlined that these “concerns” have taken the form of “the cynical protest by Senator Uribe and the right wing for whom the success of the Peace Talks means practical and real loss in terms of what the extreme right has been trying to achieve”.
Senator Cepeda also warned against what he called the “ghost” promoted by media and referring to the alleged number of people who would be against the peace talks. Cepeda said he believes the vast majority of Colombians support the peace process. “Of course” – he said – “people have doubts, some are skeptical, but basically people want peace”.
Violence by paramilitaries has been increasing in recent weeks. Hundreds of violent actions and many murders have been committed and they have often been under reported.
On May 11, the building housing the office of Aheramigua (the association that defends human rights and is rooted in the geographical areas of the traditional farming and mining communities) in Medellin was attacked by unknown assailants who tried to enter the office and not succeeding in that they turned to the basement smashing doors and windows and causing great damage and fear, as staff were inside the building at the time.
Senator Cepeda is right to point out that violence from the sectors which only stand to lose if peace is achieved increases when an agreement appears closer. This has happened in other peace processes too.

Not coincidentally a recent delegation from Turkey after visiting Colombia to learn lessons which might be useful to the current Kurdish-Turkish deadlocked peace process, stressed in its final report two crucial points, among many. The delegation underlined “the importance of inclusivity – all groups in society and all stakeholders need to be represented in the process to minimise spoiler and ensure maximum support” and the importance of “having a central focus on victims rather than the perpetrators of human rights violations brought victims of the conflict “on board” and made them supportive of the process”.
Both points have been consistently and continuously stressed by the Peace Delegation of the FARC-EP, which have acted with “generosity” – to borrow a term often used by Sinn Féin President Gerry Adams when outlining the IRA’s contribution to the Irish Peace Process. Of course “generosity” needs to apply to both sides, and it often does not.

IRELAND
In the case of the peace process in Ireland, since the signing of the Good Friday Agreement on the 9 April 1998, there have been sporadic actions carried out mainly by Loyalist paramilitaries against the peace process. And this despite the fact that their organisations were supposedly on ceasefire.
In particular the Red Hand Defenders (RHD), and the Orange Volunteers (OV), claimed responsibility for numerous attacks against Catholics in the years following the Good Friday Agreement. Many of these attacks involved the use of ‘pipe-bombs’. The three Loyalist paramilitary groups that were supposed to be on ceasefire, the Ulster Defence Association (UDA), the Ulster Volunteer Force (UVF), and the Loyalist Volunteer Force (LVF), have also engaged in violence between 1998 and 2006.
It was only on the 22 February 2003 (five years after the signing of the Peace Agreement) that the UDA declared a 12 month period of “military inactivity” (ceasefire). On 30 October 2005 the LVF also announced that it had instructed its ‘military units’ to stand down.
The UVF declared that it was renouncing violence and would cease to exist as a paramilitary organisation from midnight on 3 May 2007. On Sunday 11 November 2007 the UDA issued a statement in which it was announced that: “All active service units of the Ulster Freedom Fighters (UFF) will as from 12pm tonight stand down, all military intelligence will be destroyed and as a consequence of this all weaponry will be put beyond use”.
The UVF also said it would keep its weapons, but had put them “beyond reach”.
On 27 June 2009 the UVF (and RHC) issued a statement saying that it had engaged with the IICD (Independent International Commission on Decommissioning) to decommission its weapons. In the statement the UVF said it had “completed the process of rendering ordnance totally, and irreversibly, beyond use”.
It was only on 6 January 2010 (12 years after the signature of the agreement) that the UDA announced that it had decommissioned its weapons.
As far as Republican splinter groups are concerned, it has to be said that the IRA managed to keep defections to a minimum. This can be put down to the centrality of discussion in every single phase of the process which led to the signing of the Good Friday Agreement. Nevertheless there were other groups which opposed the Agreement and continued to carry out armed actions. The worst attack was carried out by the Real IRA on 15 August 1998, only four months after the Good Friday Agreement. A bomb racked the city of Omagh, in County Tyrone, killing 29 people and injuring many more. To this day the full truth about that attack has not been established. Indeed there have been allegations (and some have been proven) of collusion, i.e. the involvement of the security forces, who certainly did not do all in their power to prevent the attack (or at least the deaths, given that the Real IRA have always maintained they had given a phone warning before the bomb went off, allowing the security forces to clear the area should they have wanted to do so).
As well as the Real IRA there was another republican group which remained active, the Continuity Irish Republican Army (CIRA). Both groups claimed responsibility for attacks against the security forces in Northern Ireland, and bombs in England, in the years after the Good Friday Agreement.
The International Independent Commission on Decommissioning announced on 26 September 2005 that the IRA had decommissioned all its weapon.
On 11 October 2009 the INLA (Irish National Liberation Army) issued a statement announcing that its “armed struggle is over”. The group released a statement on 8 February 2010 on the issue of weapons held by the INLA.

TURKEY
The Peace Process in Turkey has been witnessing an “on and off” cycle for the past seven years, i.e. at least since 2009, when PKK leader Abdullah Ocalan announced from Imrali prison (where he has been held since 1999) that he had prepared a Road Map which would help boost the peace negotiations that the then Prime Minister, Recep Tayyip Erdogan, said he wanted. After a tiring and cynical “game” on the part of the Turkish government, nothing concrete was achieved, despite the several ceasefires called by the PKK, and the declarations, ideas, and suggestions presented by Ocalan and the Kurdish movement. Indeed, when it appeared as if some kind of peace process could indeed be brought on track, at the end of 2012 (by then representatives of the Turkish government were having direct talks with Ocalan), perhaps one of the most vicious and ruthless act of violence on the part of the Turkish state was carried out. Not in Turkey – to make the message even stronger, and not just for Kurds – but in Europe, in the very heart of Paris. On 10 January 2013 three Kurdish women, three political activists and supporters of the peace negotiation with Turkey were brutally murdered, shot in the head in the Kurdish office in Rue de Lafayette. Sakine Cansiz (the main target) was a founder member of the PKK. A woman who had been a guerrilla commander and a strong fighter for women’s rights as well as for peace. The other two young women were Fidan Dogan and Layla Saylemez. The killer was identified and arrested a few days after the murders, but the truth, especially concerning who ordered the killings, has yet to be fully disclosed, although the involvement of Turkish intelligence and Turkey’s so called ‘deep state forces’ (which may turn out to be not so deep after all) has already been proved.
After the Paris killings the Kurdish peace process entered a phase of deadlock where it remains to date. It is difficult to see any positive development, to the extent of seeing even a light at the end of the tunnel, at this stage. War is everywhere in Kurdistan and “provocation” attacks (alongside those ‘officially ordered’ and carried out by the Turkish army) are an almost daily occurrence. Political repression and persecution are once again the priority of the AKP-led government (an AKP which, by the way, is facing an internal crisis now, as President of the Republic Erdogan, egocentric and with a megalomaniacal thirst for absolute power, in the style of the sultans of old, succeeds in making larger and larger sectors within the AKP party uneasy). There are talks of lifting immunity (nothing new here, sadly history keeps repeating itself) for Kurdish deputies, arrests (of journalists, trade unionists, students, human rights activists) are made by the dozen every day and this week the formal medical identification of the 100 people (now names and faces, as photos of each one of them have been published) who had been burned to death in the buildings under attack in the city of Cizre under Turkish army siege for weeks a few months back, has added horror to horror.

NON CONCLUSION
Making peace, as Gerry Adams continues to reiterate, quoting Nelson Mandela, is much more difficult than making war. Which is perhaps why one of the most important issues in any peace process is inclusivity. No one should feel threatened by peace. No one should feel he or she is losing something by betting on peace. Of course the road to peace will be not a smooth and clear path. There will be obstacles, violence, death even. And, as other processes show, the violent reaction of certain sectors and groups (including those, and they are many, motivated by purely economic interests, because war is a business) is to be expected and the work of those genuinely working for peace is to explain and talk and show that peace is ultimately a better option. As Adams said, our gaze must remain fixed on the goal, which is an inclusive society based on social justice and equality. Where equality means everyone should have the same opportunities and the same rights and above all the right to be treated on equal terms.