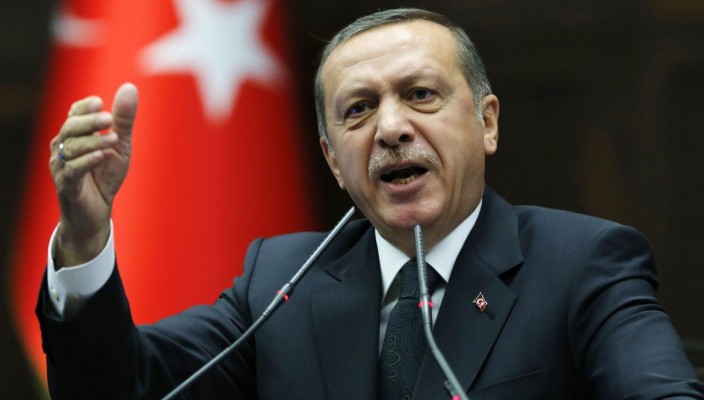 we are witnessing once again the full scale of the violent repression the Turkish state is capable of. Scores are thrown in jails every day, and of course the war against Kurds is back to levels seen in the ’90s

Turkish President Recep Tayyip Erdo?an is being called many things: a dictator, a modern times sultan, an islamic fundamentalist, a fascist, a murderer, a madman, a political strategist… and the list could go on.

He is, no doubt, one of the most interesting (and scary) political leader of our times. Indeed he was nominated one of the most important 100 personalities of the century by the magazine Time. He has been in the political arena since 1984, immediately after the (third) bloody military coup in the history of the Turkish Republic. Born in Istanbul, he grew up in a devoted islamic family from Rize (North of Turkey, in the Black Sea area). He went to an Imam Hatip school (a vocational islamic school) before moving to study business administration in what is now known as Marmara University’s Faculty of Economics and Administrative Sciences. After the 1980 military coup Erdo?an entered Refah (Welfare Party), the party founded by islamic reactionary leader Necmettin Erbakan (who was to become Prime Minister in 1996). Erdo?an was first Beyo?lu district chair while in 1985 he begun chair of the Istanbul city branch of the party. In the 1994 local elections, he was elected mayor of Istanbul. He stayed in office till 1998, when the Refah party was declared illegal and shut down by the Constitutional Court that said the party was threatening the secularism of Turkey.

A few months before the closure of the party, Erdo?an read a poem in the Kurdish city of Siirt at a rally in support of Refah. The poem was by Ziya Gokalp, considered by many the father of Turkish nationalism and promoter of the supernational pan-Turkic identity so much present in Mustafa Kemal Ataturk’s politics in his shaping the Turkish Republic.

The choice of a poem by a writer and sociologist who actually was so influential in the negation of islamism, pan-islamism and Ottomanism should not surprise. Indeed Erdo?an recited his own version of Gokalp’s poem, adding verses translated as “The mosques are our barracks, the domes our helmets, the minarets our bayonets and the faithful our soldiers….” which are not to be found in the original poem. Interestingly though, many years after this “choice” of poem, we can see what clearly Erdo?an admired of Gokalp: his 1923 (the year of the proclamation of the Turkish Republic) The Principles of Turkism, published a year prior to his death, outlines the expansive nationalist identity concept he had long popularized in his teachings and poetry. For him the nation is “composed of individuals who share a common language, religion, morality, and aesthetics, that is to say, who have received the same education.” Of course for Gokalp the unifying virtue was the primacy of Turkishness, that is: nothing different from it was allowed.

These concepts, so easy to spot in Ataturk’s own politics, do not differ much from what Erdo?an himself is proposing. In order to achieve this, though, he needs to be the supreme chief of the nation, which means he needs no democratic system around him. Which explains his slow but systematic work of demolishing the – certainly not perfect – structures and institutions which have been governing Turkey since Ataturk. The last strike in this demolition was the removal of Prime Minister Ahmet Davuto?lu. He was the last “pretension” of a parliamentary regime, democratic rule and rule of law, so to speak. The last link, as some commentators wrote in Turkey, to democratic rule. Even though the former Prime Minister wasn’t a real democrat, he did represent the pretension of a “democracy”. Now this is gone. Erdo?an’s ultimate goal is the so-called “Turkish-style presidential system,” but we are already in the presence of a de facto monopoly of President Erdo?an’s power, even before the change of the Constitution formally establishes this. What we have witnessing in the past year (or more precisely in the past number of years) is a de facto loss of judicial independence even before the judiciary is put under direct control of the executive presidency, and crucially even within the framework of the present education system, the new policy to create a “faithful generation” was enforced by the promotion of religious schools.

Education being one axis of the New Turkey project envisaged by Erdo?an,

“command economy” is the other. The new authoritarian political system needs to ensure allocation of resources according to political loyalties.

The New Turkey project will be based on new concepts: the definition of democracy has long being reduced to majoritarian rule, and is being replaced by concepts of “national will” and “historical mission.” The “nation” itself is started to be defined along the lines of the membership of the “community which is formed by common history, faith, goals and loyalty.” Sounds familiar ?

So the more skeptical say that now, it is Erdo?an’s Turkey, like it or not. The President has been very clear: he believes in his supreme leadership achieving a historical break with the republican past and realizing the dream of a “strong Turkey” leading the Sunni Muslim world. His goals can be achieved through the “Turkish-style presidential system” he is proposing. He made it clear he does not believe in party politics and his Justice and Development Party (AKP) is no ordinary party but rather the name of a “mission” or “cause” (dava, in Turkish).

Of course, intellectuals, NGOs, journalists, unionists, students and academics who are critical of “Project New Turkey” are labelled traitors, puppets and collaborators with Turkey’s enemies. And we are witnessing once again the full scale of the violent repression the Turkish state is capable of. Scores are thrown in jails every day, and of course the war against Kurds is back to levels seen in the ’90s.

Hanna Arendt in her “The Origins of Totalitarianism” wrote: “Totalitarianism differs essentially from other forms of political oppression known to us such as despotism, tyranny and dictatorship. Wherever it rose to power, it developed entirely new political institutions and destroyed all social, legal and political traditions of the country.”

And it seems an appropriate definition to describe what is going on in Turkey, even maintaining a cautious approach.

Though undoubtedly is hard to see light at the end of the tunnel, there are cracks in an apparent solid wall: the Turkey’s regime has clearly supported (training them and with logistic and military help) ISIS militants, and yet nowadays the honeymoon seems to be experiencing some problems. Last week attack at Istanbul airport is perhaps only the latest evidence of this.

Likewise, not everything is going as smooth as Erdo?an thought in his frenzy foreign policy and diplomacy.

And then there is the brave Kurdish people and the brave left, democratic, progressive people of Turkey fighting in whatever way they can to avoid the disaster.

They cannot be left alone. We cannot leave them alone.