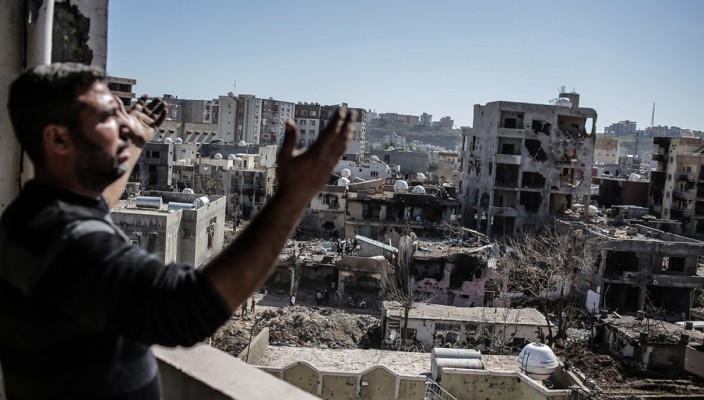 The report, compiled by the 4 HDP members who visited Cizre for 10 days after the blockade was lifted, collects the narrative from witnesses and attempts to document the list of atrocities perpetrated during the siege “For 79 days, the people of Cizre witnessed an exceptional massacre in history. For the sake of a humane and free life, they lost their daughters and sons during the resistance. Yet they have not surrendered, and have not asked for mercy.”
THE CIZRE REPORT
April 17, 2016
Peoples’ Democratic Party (HDP)

In April this year The Peoples’ Democratic Party (HDP), Partiya Demokratîk a Gelan, in Turkey, produced its promised Cizre Report, on the Turkish military curfew of this city in the ??rnak Province of northern Kurdistan, near the Syrian border.[2]
You need to read this. The whole world needs to read this.
If you can’t (or won’t) read this document and if your heart doesn’t break when you do or your spirit cry out “enough” then you can be sure you’re probably not really alive. Not where it counts anyway.  Not where whatever it is that makes us human survives in the midst of our seemingly unstoppable history of violence, cruelty and unspeakable horror.
Which is probably where ‘our’ slightly more western part of Europe is hiding out at the moment (half ‘alive’ and obsessed with economic growth, consumer spending, GDP, transnational trade deals and agricultural subsidies)…that and turning the blind eye called “denial”:
“People of all ages, and especially women, have expressed during interviews their deep hurt at the public’s silence in the face of the state’s massacre of mostly injured civilians in the basements” [3]
…especially when you realise that this Report tells us that, in the midst of this silence that is as enormous as the physical brutality that is currently being waged in the part of south eastern Turkey that is northern Kurdistan – a war is being waged on civilians, and in residential neighbourhoods, to equal anything going on anywhere else in the world – only here, one that seems unimportant or trivial to the western powers – including the mainstream media and the political establishment that seem more concerned with the onslaught of Syrian refugees into our cities than the flagrant violation of human rights on a civilian population being perpetrated by the Turkish military in a place like Cizre.
“To glorify democracy and to silence the people is a farce; to discourse on humanism and to negate people is a lie.”[4]
Someone should point this out to our current ‘leaders’.
“Despite the evidence presented, there was a lack of condemnation from the West and human rights organizations, which prompted the Russian Foreign Ministry to accuse the bodies of being “selective” in their condemnation.”

Russia Today said on the 28th April.[5]
Echoes of History?

[6]
Of course, the Turkey of President Recep Tayyip Erdo?an, responsible for the current atrocities, is a member of the North Atlantic Treaty Organisation (NATO), a good enough reason, Robert Fisk, of the London Independent, recently explained, for the United States to still see the Armenian genocide that began in 1915 as ‘a matter of historical debate’ and not a planned, systematic and brutal massacre of innocent people:
“And Turkey – heaven be praised – is now our good friend, Nato ally and, since this month, our bastion against the Muslim refugee “invasion” of Europe.[7]
Coincidently, In the early 20th century the Armenian population of Cizre was estimated at around 3,000. In June 1915, as part of the Armenian Genocide, all
“…were arrested, tortured, and subsequently murdered. Many of the victims had their throat slit and were then thrown into the river Tigris. The women were deported on rafts towards Mosul. A few survived through the means of adoption by local Kurds; however, most were raped and/or drowned. The remaining Armenian population, located in the rural parts of Cizre, was massacred on 8 August 1915. Few managed to survive.”[8]
The question now is: are the Kurdish people to suffer the same fate, followed by a similar silence?
The Siege of Cizre 2015-2016

[9]
On the 7th June, 2015 the pro-Kurdish HDP Party received 91.7% of the votes in the south eastern region in the Turkish parliamentary elections. In July the two and a half year ceasefire between the AKP (Justice and Development Party) government and the PKK (The Kurdistan Workers’ Party – Partiya Karkerên Kurdistanê?) ended. In September of that year, Cizre was blockaded by Turkish Security Forces, who placed a curfew on the city for eight days. The death toll in these days is estimated at 22 people. This marked the final end of the Kurdish–Turkish peace process.
“After June 7, Erdo?an and the AKP government, fully bound by his will, took the developments in Rojava into consideration, returned to the concept of war, and ended the peace process, in his words “deep-freezing” the latter.”[10]
At the time of the first siege the Council of Europe raised concerns about “disproportionate use of force by security forces against civilians.”[11] In the election re-run organised by Erdo?an and the AKP government on November 1st, the HDP Party now received 93.2% of the votes in the region. Following this on 13 December 2015, the curfew on Cizre was implemented.
This 79 day siege lasted until March 2, 2016. On 7 February, a large-scale operation was conducted in the Cudi neighbourhood and a number of residential buildings were hit by artillery shells.
Massacre

[12]
By early February news of the massacres of the injured trapped in basements under these buildings collapsed by Turkish artillery fire, reminiscent of the extermination of the Warsaw Ghetto, began to emerge
“While details of the savage massacre committed by Turkish forces in ??rnak’s Cizre     district are not clear yet due to the ongoing blackout, it came out that 26 people             trapped in the first basement of atrocity had all been massacred.

A total of 31 people in this first basement, 15 of whom were wounded, had been                        awaiting evacuation for 19 days when they were last reached 2 weeks ago.”
ANF NEWS, Friday, February 12, 2016, 4:40 PM[13]
But the Cizre report shows us, not just these finally-counted 251 dead, 176 of them[14] buried alive or burnt in buildings they were sheltering in, not just the injured refused medical treatment, not just civilians trapped by military sniper fire, it shows us a seemingly endless list of horrors that armed police and military units motivated by belligerent politicians concerned with their grip on power feel free to perpetrate without any fear of being called to account:
“Turkish President Tayyip Erdo?an says members of the Kurdistan Workers Party (PKK) must either surrender or be “neutralized,” stressing that the time for peace talks is over.” (April 2016)[15]
THE CIZRE REPORT

Though the poem was written in 1955, if it was today he would have added the line:
In the neighbourhoods of northern Kurdistan,
…the murderers are at work.
Looking back it seems we have been ‘lucky’, here in Ireland, that the work continues to build and grow our own peace process and the international community serves as its advocate and witness and the atrocities that occurred here took place – even if it took much time, even if only eventually – in the full glare of publicity and public condemnation, despite the might of whatever empire,  British or Turkish…
We can only hope (and insist) that the international community speak out and that the different peoples within Turkey and Kurdistan will be offered and find the conditions and the incentives needed to return to their own, now desperately-needed, peace process.
“The Cizre Siege and how it has been experienced is one of the most important social and economic consequences of the termination of the Peace Process. It revealed how precious peace was and how conflicts lead to irrecoverable damages in all parts of society.”

[21] Poetry Readings in the Cellar, Kenneth Rexroth and Lawrence Ferlinghetti, Recorded at the Cellar in 1957,  http://www.allmusic.com/album/poetry-readings-in-the-cellar-mw0000672471