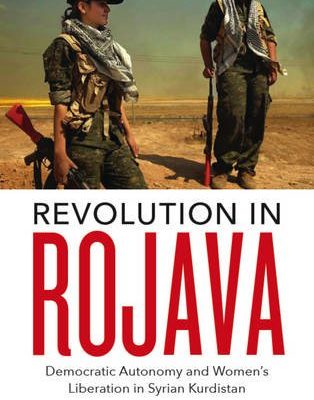 Aybo?a: “We are facing yet another attack on kurdish people”

We asked Ercan Aybo?a, representative of the Mesopotamian Ecology Movement and author of the book “The Rojava Revolution”, his assessment of the latest events in Amed

After a detention order issued within the scope of an investigation against the PKK by Diyarbak?r Public Prosecutor’s Office, anti-terror units police detained Amed Metropolitan Municipality co-mayor Gültan K??anak at Diyarbak?r Airport and co-mayor F?rat Anl? in his house, on Tuesday 25 October.

Gültan K??anak had just returned from Ankara when she got detained at the airport. In Ankara, she had been speaking at an hearing by the Parliamentary Commission of Investigation on July 15 coup attempt and the influence of coups and secret formations on politics.

F?rat Anl?, on the other hand, was taken into custody during a raid on his house. The houses of both co-mayors were also searched by police.

While the detention of co-mayors were being carried out, police forces raided the building of Amed Metropolitan Municipality and surrounded it with a large number of riot and special operations police to the accompaniment of armored vehicles and water cannons.

The municipality employees and press members were not allowed to approach the building amid a tension with police forces. Special operations policemen with long-barreled weapons have been stationed in every storey and at the roof of the municipality building.

Citizens reacted immediately against the detention of K??anak and Anl?: hundreds of people staged at sit-in in front of the municipality and vowed to remain there despite the assault by the police. Dozens have been arrested in the past few days, including many officials and HDP elected representatives.

In a statement he issued on the detentions the  Chief Public Prosecutor Kamil Erkut Güre stated that the two Co-Mayors were detained as part of an investigation on “attempting to separate a portion of land under state sovereignty,” which had begun in 2015.

We asked Ercan Aybo?a, representative of the Mesopotamian Ecology Movement (founded in 2011 and restructured as a social movement since the beginning of 2015) and author of  the book “The Rojava Revolution” his assessment of the latest events in Amed.

Clearly we are facing  yet another attack on kurdish people and their rights as well as on their elected representatives. why do you think the government is stepping up is repression?

The recent arrest of the co-mayors of Amed, Gültan Kisanak and Firat Anli, is not only a new attack, rather it is the intensification of the repression against the Kurdish people within the Turkish state. Since the restart of war in July 2015 by the Turkish government, according to a certain plan the attacks are implemented. The parliamentary speaker of the HDP stated few days ago that the arrest of the co-mayors insisted that this “repression plan” has been even developed in end of 2014, just in a time when the talks about a peace were ongoing intensively.

The government’s aim is to take back with repression means all spheres, tools and institutions from the Kurdish Freedom Movement. The municipalities and the HDP parliamentarians are an important gain of the Kurds. In the last one year the local neighborhoods and the youth movement have been faced with extreme repression. Hundreds of DBP politicians have been put in prison for a long time. The union of public workers, KESK has been faced with the suspension of approximately 11.000 suspensions. The list is long. In the demonstrations in an extreme way tear gas is used which affects people heavily. Another tool are the suicide bombs of the IS members against Kurds, like in Amed and Antep, which have been apparently initiated by the Turkish government. The overall goal of these repression and attacks is to spread fear in the population, make it sensibleness on the repression and limit solidarity in the society.

All these steps have not been taken when there was a war in 2011 and 2012 between the Turkish state and the Kurdish side. Apart from the guerrilla the resistance of the Kurdish population in these two years was so strong that the government had to start negotiations again. Additionally the solidarity mass actions in October 2014, when the IS started to occupy

How much do you think the AKP members and officials share the president’s position on Kurdish Question?

The AKP is no way a democratic party and absolutely authoritarian. The opinion of the leadership, particularly of Erdogan, is crucial for all approaches and statements on all levels and is adapted without questioning. Nevertheless in Kurdistan there are some ordinary AKP members who do not actually share fully the position of Erdogan, but either they can not say anything adversely due to fear or have no own opinion and possess only short term material and political interests in the AKP. Many Kurds have joined the AKP for the latter interests and for political reasons. While in the beginning the political reasons (like religion, conservative values, neoliberal approaches) were dominant, over time with governing the material and financial have been become the main reason to be in the AKP. For example there are hundreds of companies and big families who stay in the AKP as long they benefit economically via tenders on local level. This is characteristic not only for this party, rather for the half of the population in the Turkish state. If the AKP would loose the power, these circles would leave in majority the government.

In Turkey there are also many circles, which joined the AKP for interests and not so much ideological reasons. The AKP is a big coalition of conservative, islamist, fascistic, neoliberal circles, maybe only half of the current voters have still ideological reasons to stay with the AKP. However in Turkey there are almost no AKP members thinking really different from Erdogan. There is only a small difference in the level of insensitivity of repression on the Kurds.

Over the last 14 years Erdogan has eliminated all persons on higher level in the party who had different ideas and approaches than him. Either they became unimportant in the party or they have left it.

Basically President Erdogan has kidnapped the country… but how long can this last? How do you assess the international community reaction?

The so called “international community” is dominated by the Western states (USA and EU) whose political interests in the Middle East, Caucasia and other subjects are strongly connected with the Turkish government. Although they do not favor any more fully AKP’s policies, they still work the Turkish state which is their important strategic ally since the 50’ies.

Probably the Western states find it positively in marginalizing the Kurdish Freedom Movement and the connected Democratic Movement for whole Turkey. Although the critic on the AKP and Erdogan raised in Western public in the last 3-4 years, we should not forget that the democratic movement in Turkey and North Kurdistan is strategically against the narrow interests of the Western states. The AKP could become so strong because of the political, financial and military support by the Western states since its foundation in 2001. Turkey has become a big and beneficiary market for Western companies. Turkey was the state which implemented on the ground the Syrian police of the NATO (USA and European states acted together on Syria) in the first 2-3 years of the war in Syria. Even the verbal conflict with Israel since the Mavi Marmara case is probably something calculated. The AKP should have become the model for Muslim states which seemed to be successful just after the start of the uprising in the Middle East and North Africa. But in 2013 the things changed when the Muslim Brotherhood, of which the AKP is part of, started to follow objectives in contrary of the NATO.

The existing current problem is that Erdogan has started to follow own interests in the region, become too much repressive in Turkey (Gezi protests) and does not do absolutely fit with the NATO states policies. If the NATO states would find an alternative in the Turkish politic scene, they would support. Here is the dilemma: There is no real strong opposition, even not among the bourgeois and neoliberal parties. Especially the role of the CHP is crucial which unfortunately follows mostly a nationalist and unclear line. The HDP resists, but their actors alone are not strong enough to challenge the AKP in 2016. In this sense the problem is that many HDP and non-HDP leftist and other democratic organizations and people do not go to the streets, particularly after the elections in November 2015 when the AKP regained the majority of the parliamentarian seats. The bombs of IS suiciders, the AKP repression and the loss of the elections has passivated them.

The resistance in the streets of North Kurdistan is in this situation not strong enough which is connected to the destruction of 7 cities, the displacement of several hundred thousand people which affected the most political Kurdish people and the extreme repression on activists and democratic organizations. However, the resistance in the mountains is very strong, the Turkish military had no one serious success in its military operations. The Turkish military has been defeated in many mountains. But this is in short-term not enough to weaken the government as the nationalist wave is strong in the state, which has been strengthened by the failed military coup in July 2016.

While the Turkish state has a certain short-term success, its policy in the Middle East is confronted with much more resistance and critic. The resistance in Rojava/Syria against the Turkish invasion by the Syrian Democratic Forces (SDF) has been quite successful, and the Turkish state supported salafist and terrorist groups, called FSA, have been defeated by the SDF in all clashes on the ground. The SDF could even limit the offensive of them to Al-Bab in the last 1-2 weeks and its unclear how the situation will continue. It depends on many factors and states approaches, but mainly the strength of the resistance by the SDF and population of Rojava.

Also the reaction of the Iraqi government against a Turkish participation in the Mosul operation shows the limits of the Turkish foreign policy’s. While some years ago it aimed to be influential in all states, now it limits its interests to the North of Syria and Iraq where live mainly Kurds. This is related to the strategy not to give Kurds any rights, only Kurdish organizations like the Iraqi KDP should be allowed as long as they serve for the own interests. No independent, self-organized and free Kurds should exist in the Middle East one very crucial main aim.

In summary we can state that the internal resistance is not enough for now. At this moment it seems that a political-military defeat in Syria and Iraq and/or an economic crisis can initiate a weakening of the AKP. The economy is fragile and the AKP does everything in order to avoid the coming crisis. As described the Western state will not work for the weakening of the AKP. This is related to the important deal on the many refugees in the Turkish state borders and to the aggressive role of Russia in Syria and the greater region. We should not expect or hope anything like this in the next months. A forecast for years is impossible to be done in this globally fragile situation, particularly if its about the Middle East.