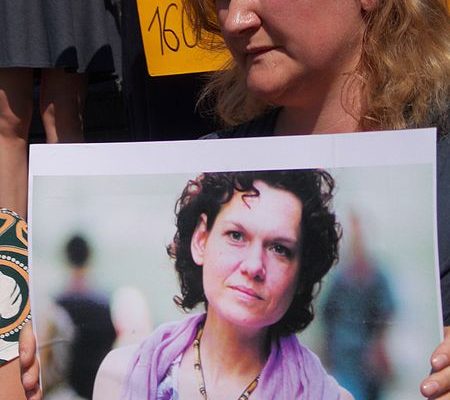 On November 15th, Margaret Atwood writes to Asl? Erdo?an in a Turkish prison: “you are not alone”

“Like you, I and many, many other writers believe that literature can inspire the longing for justice, can generate tolerance, and can expand human sympathy and understanding.” Margaret Atwood

Asli Erdogan in a Turkish prison:

“you are not alone“, she says.

i am not so sure of that, Margaret.

I think, maybe, we are all alone.

There are many prisons

and this enormous one now in Turkey

of “concrete walls”, “barbed wire”, and “locks and keys”

“I hope that you will find yourself in a Turkey

where you can write and speak without fear and censorship.”

but you might be waiting a while for this,

this one we see now in the news

and the one Orsola writes of

from the borders of Kurdistan and beyond,

these sharp edges that twist and shape our lives.

It’s not that i keep thinking of Nazim Hikmet

who survived all but it still broke his heart:

“I look at the night through the bars,

and despite the weight on my chest

my heart still beats with the most distant stars.”

or Sakine Cans?z and her friends, shot dead

Still, our hearts go out to you Asl?,

We are not depressed

(of course we are! but that’s not

the fucking end of this story).

We know human beings have been struggling a long time

to end the darkness that swallows you,

this stone instead of a heart!

This cold prison instead of humanity!

And, somehow, the fact that we are able

across these immeasurable distances,

beyond all catastrophe and privilege

all contradiction and cruelty,

even in the dark at night

when I wake, alone, and hear

Asl? Erdo?an, writer, born in Istanbul,  was taken into custody during the police raid on Özgür Gündem on 16 August 2016. She was detained on 17 August 2016 for being a member of the advisory board of the newspaper. On 20 August, she was arrested and jailed for pretrial detention. “Erdo?an, a member of Özgür Gündem’s advisory board, was sent to a jail in Istanbul on preliminary charges of “membership of terrorist organisation” and “undermining national unity.” “Özgür Gündem was quickly succeeded by Özgürlükçü Demokrasi (“Libertarian democracy”), which featured a daily column called “Asl?’s Friends”. Wikipedia tells us…