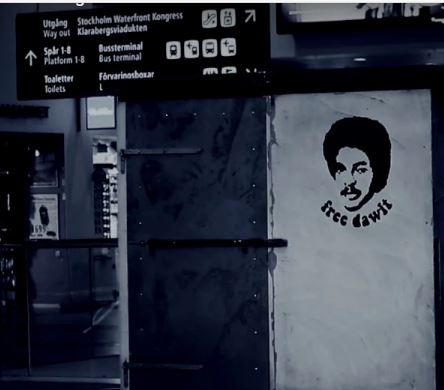 Eritrean writer and journalist and Swedish citizen (for all the good it does him) Dawit Isaak, has been awarded the UNESCO/Guillermo Cano World Press Freedom Prize 2017. The $25,000 award is named after Guillermo Cano Isaza, a Colombian journalist who was assassinated in front of the offices of his newspaper, El Espectador, by two assassins [&hellip

Eritrean writer and journalist and Swedish citizen (for all the good it does him) Dawit Isaak, has been awarded the UNESCO/Guillermo Cano World Press Freedom Prize 2017. The $25,000 award is named after Guillermo Cano Isaza, a Colombian journalist who was assassinated in front of the offices of his newspaper, El Espectador, by two assassins linked to Colombia’s drug cartels, in Bogotá, on 17 December 1986.

Dawit has been lost in President Isaias Afwerki’s repressive prison system since September 23, 2001 and has been held incommunicado without either charge or representation since, despite a significant international campaign to have him released.

Isaak was born in Eritrea in 28 October, 1964 three years after the start of the Eritrean War for Independence and 21 years into the conflict he flees to Sweden to escape the violence. By now he has published a number of books including two novels. In 1992 he became a Swedish citizen and the following year, the Eritrean Liberation forces having defeated the Ethiopian army, in a referendum supported by Ethiopia, the Eritrean people vote almost unanimously in favour of independence, April 1993. Formal international recognition of an independent, sovereign Eritrea follows later the same year. Dawit Isaak returns to his native country.

Esayas Isaak writing about his brother in 2015 says:

“This was at a time when the streets of Asmara were seething with political debates. Many felt that Eritrea was on the brink of an even greater challenge than the thirty years long Eritrean War for Independence. The country had all the chances of becoming a leading nation on the African continent. Those of us who were living in exile had great hopes set on Eritrea. Dawit and his colleagues on the newspaper Setit went there to write about the citizens’ longing for democracy, the farmers’ rights to their own land, or the right to be adequately informed about HIV. These kinds of articles may to us seem banal but in a totalitarian state such as Eritrea they can entail indefinite imprisonment without trial. Well, one need only study the case of Dawit.”

He continues to write and in 1997, he, along with some other journalists, launches “Setit”, which becomes Eritrea’s first independent newspaper. By the year 2000 the aspirations that independence will bring freedom to the people of Eritrea begin to dim in the now one-party-state of President Afwerki and a developing opposition (later named “G-15”) begins demanding free elections and for the proposed constitution to be implemented. “Dawit Isaak reports on these letters in his newspaper, Setit. Dawit’s motto is: ‘If you have the opportunity to write, do it.‘ To Dawit, all news is of importance, anything from large issues like war to local incidents, and needs to be shared with the public.” (Free Dawit Campaign)

“Eager to develop the country’s independent press, Mr. Isaak co-founded the country’s first independent newspaper, Setit, which would rise to national prominence as a professional paper and gain a reputation for investigative reporting which often focused on abuse of power by the government.” (The World Association of Newspapers and News Publishers, ‘Dawit Isaak named the 2011 Golden Pen of Freedom’, October 2010)

Not to be. From 2001 up to the present the Eritrean regime of Isaias Afwerki consistently  rejects all criticism and has established a system of repression involving disappearance, extra judicial assassination, torture and imprisonment that a United Nations report in 2016 (‘UN Inquiry finds crimes against humanity in Eritrea‘) has described as being second only to the profound lack of human rights in North Korea. The UN says: “…imprisonment, enforced disappearances, persecution, murder and other inhumane acts have been committed as part of a campaign to instill fear in, deter opposition from and ultimately to control the Eritrean civilian population since Eritrean authorities took control of Eritrean territory in 1991.”…The Guardian newspaper, in an article in August 2015 asked “Has Eritrea become Africa’s North Korea?”

As for Dawit Isaak, from the time of his arrest up to the present day, he has apparently disappeared within the prison system with the exception of a brief moment in November 2005 when he was released for medical attention (apparently as a result of torture) but was quickly rearrested the following day. Despite some research as well as speculation, his whereabouts within the prison system remain unknown to this day:

If prisoner-of-conscience Dawit has become a non-person within this regime not so in the international world of journalists where both his memory is kept alive (at the same time that there are ongoing genuine fears that he himself may not be) and a campaign for his release is ongoing. Some of the awards he has received have been listed on the Free Dawitt site, https://freedawit.com/english/:

2003: Reporters without Borders’ Freedom of the Press Prize

2009: The Tucholsky Prize by Swedish PEN

2010: Golden Pen of Freedom, the annual press freedom prize of the World Association of Newspapers and News Publishers.

In 2009, Swedish journalists attempted to bring attention to Dawit Isaak’s long detention, and journalist Donald Boström interviewed President Afwerki. His replies included the quotes above.  He also told Boström, “We will not have any trial and we will not release him. We know how to handle him and others like him.”

A  habeas corpus petition filed by Isaak’s lawyers with the High Court of Eritrea in 2011 was ignored.

Following the UN Office of the High Commissioner for Human Rights report, 8 June 2016,           (“Officials in Eritrea have committed crimes against humanity, including enslavement, rape and torture, across the country over the past 25 years…”) as well as clashes on the Eritrean and Ethiopian border, Eritrean Foreign Affairs Minister Osman Saleh made the announcement that Dawit Isaak is still alive but added that “the journalist will only be sentenced when the government decides it is ready to do so”.

Dawit is not alone: “…recent research by Eritrean human rights groups suggests more than 360 facilities are still holding more than 10,000 prisoners of conscience.”

“While all eyes are turned on Syria, another, less visible, tragedy is being played out in Eritrea, a country forgotten by the international community although it is the world’s leading media freedom violator and Africa’s biggest prison for journalists…” Reporters Without Borders commented in 2012, in a Report on the suspected deaths of at least 4 journalists in Eritrea’s prison system.

Confronted by the outrageous arrogance of these police states and their authoritarian masters in an age where freedom should be on the top of the agenda in every country, in every aspect of human life: words fail. All that is left is that we get up the next morning and begin (or continue) the long struggle to end this darkness…

Alice Walker, the American writer and activist, wrote a poem about torture. It might be relevant to read confronted with the ongoing crimes against humanity perpetrated on Dawit Isaak and other prisoners of  conscience in the dungeons and torture-rooms of a ‘free’ Eritrea:

When they torture your mother

When they torture your father

When they torture your brother

Whey they torture you

When they begin to torture

and cut down the forest

Sources & References (thanks to)

Marking the fifteenth anniversary of Dawit Isaak’s arrest, a tribute to Dawit by David Berridge

Eritrean Poet and journalist Haile Bizen, in exile in Norway: My Eritrea

SOUND: Eritrea’s Foreign Minister claims ‘the political prisoners are all alive and in good hands’

“On a visit to Paris, the Eritrean Foreign Minister Osman Saleh sat down to answer RFI’s questions about alleged crimes against humanity, political prisoners and the recent fighting at the Ethiopian border. He spoke to RFI’s Anthony Lattier:

VIDEO Series: “Spread the word – that is something all of us can do!”

In order to increase the urgency and awareness of Dawit Isaak´s case the Swedish NGO, Stödkommittén Free Dawit Isaak (Support Committee Free Dawit Isaak), has with help from actors, journalists and opinion leaders produced 10 unique reflections from them on the thought of being imprisoned.

No. 1/10 was the Swedish journalist and author Martin Schibbye, the Swedish journalist who himself has a deep knowledge of being held for wanting to tell the truth is the first one. He spend 438 days in an Ethiopian prison. “We believe and hope for his last words in the video ‘Word brought him here. Words will set him free.'”

No. 2/10 featured a personal reflection by MEP Cecilia Wikström:

No. 3/10 features the Swedish actor Alexander Karim that shares some of his thoughts of being locked away in isolation.

In this video clip, No. 5/10 Swedish actress Kajsa Ernst share with us her emotions of despair and anger as she reflects upon how it would to be deprived of liberty for such a long time as Dawit Isaak has been detained.

In this video clip, No. 6/10 Swedish actress Malin Arvidsson share with us her thoughts of not being able to see ones children when being deprived of liberty for such a long time as Dawit Isaak has been detained:

No. 7/10 Actress Sofia Helin portrays her feelings about Dawit Isaak’s fate, “…. the loneliness…”

In No. 8/10 Swedish actor Stefan Sauk contemplates on Dawit’s situation.

No. 9/10 features the poet & text writer Daniel Boyacioglu recites the verses from the song. He is the creator of the beautiful lyrics to “Bird Song”.

No. 10/10: This one-minute video is the last out of 10 and we see in it Dawit Isaak’s oldest daughter Betlehem sharing her words to a father she hasn’t seen since 2001. Betlehem Isaak’s words to her father:

Birdsong is written for the Swedish-Eritrean journalist Dawit Isaak. Birdsong was released on Dawit’s 52nd birthday: 27th October 2016. The visuals in the video are from a week long manifestation that was held at Stockholm Centralstation, Sweden September 2016.