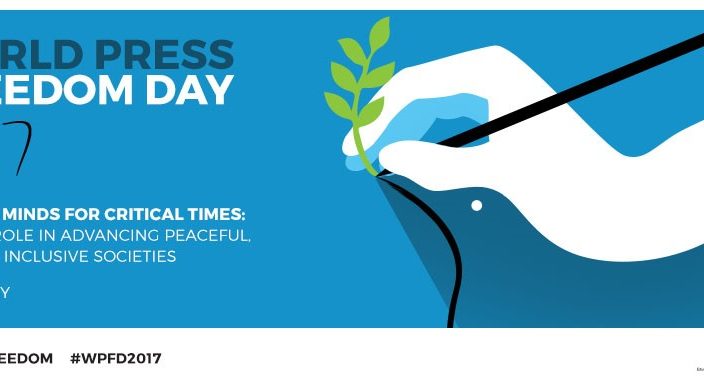 This year, World Press Freedom Day will be hosted in Jakarta, Indonesia from the 1st to 4 May. The theme: Critical Minds for Critical Times

Since 1993 when the United Nations General Assembly declared May 3 as World Press Freedom Day following a Recommendation adopted at the 26th Session of UNESCO’s General Conference in 1991 as well as a call by African journalists that same year following their Windhoek Declaration (“The document calls for free, independent and pluralistic media throughout the world. The Declaration also asserts that a free press is essential to democracy and a fundamental human right.”) on media pluralism and independence:

“3 May is a date which celebrates the fundamental principles of press freedom; to evaluate press freedom around the world, to defend the media from attacks on their independence and to pay tribute to journalists who have lost their lives in the exercise of their profession.” (UNESCO)

This year, 2017, World Press Freedom Day will be hosted in Jakarta, Indonesia  from the 1st to 4 May. The theme: Critical Minds for Critical Times: Media’s role in advancing peaceful, just and inclusive societies: “participants will examine current challenges facing media, including the continuous trend worldwide of attacks against those who bring journalism to the public.”

A special and timely focus this year will thus be the growing pressure facing journalists worldwide as they seek to give a voice to the disturbing world that surrounds us all: “Within the framework of UNESCO’s Research Agenda on the Safety of Journalists, the conference provides a platform for academic inquiry towards understanding and eventually countering the current trend of violent acts towards media workers.”

This 24th year of World Press Freedom Day the UNESCO/Guillermo Cano World Press Freedom Prize will also be awarded on the evening of May 3, to Dawit Isaak, the imprisoned and disappeared Eritrean-born journalist, arrested in 2001, who will be represented by his daughter, Bethelem Isaak. The award ceremony will be hosted by Joko Widodo, the President of Indonesia. We can only hope that news of the award will leak in through the barbed wire and darkness of President Isaias Afwerki’s many dungeons and sustain this long time prisoner-of-conscience.

Inter Press Service News Agency (IPS) in their video statement issued from their World Desk, Rome, April 25 2017: “Journalists are not only major users of the cherished right to freedom of expression but also symbols of the extent to which a society tolerates and promotes freedom of expression. The current state of safety of journalists worldwide is alarming. Over the last decade 827 journalists and media workers have been killed. Even more alarming is the fact that in less than one out of ten cases have the perpetrators been apprehended. Judicial systems worldwide need to be strengthened with a key focus on protecting freedom of expression and the safety of journalists. Even in this emerging world of technology and digital accessibility, we remain handcuffed by the inconvenience of facts. While the digital era has enhanced access to information, facilitating exchange as well as intercultural dialogue, the rise of online hate speech shows that digital technologies also bring a number of challenges. One of these is striking the right balance between freedom of expression online and respect for equality and human dignity.”

They conclude: “Let us be mindful: the role of the media is only as strong as the desire for truth.”

Every year since 1993 events are scheduled across the globe to mark the day. This year, in a period of profound instability, where the assault on human rights is at its most intense while at the same time embracing new ways and means of curtailing the freedom of expression, Turkey becomes the focus of a large number of planned actions highlighting both the promise of freedom of expression as well as its catastrophic denial in this country where, among many other sectors of the community as well as large numbers of Turkish citizens, the media is under ferocious siege.

English PEN, Amnesty International UK, Index on Censorship, Reporters Sans Frontières, PEN International and the Professional Cartoonists’ Organisation are organising a vigil outside the Turkish Embassy in London, in protest over the detention of journalists and writers in Turkey. This London protest will be one of several taking place at Turkish embassies around the world on this World Press Freedom Day.

“Turkey is currently the world’s biggest jailer of journalists: one third of all imprisoned journalists in the world are being held in Turkish prisons, the vast majority waiting to be brought to trial. Meanwhile, at least 156 media outlets have been closed following last summer’s coup attempt.”

“We are delighted to be partnering with other organisations on the Free Turkey Media campaign. With so many of our fellow writers and journalists currently imprisoned or on trial in Turkey it is essential that we come together to support them.”

“The detention of so many journalists, often for many months without trial, is completely unjustified and seems intended to create a climate of fear in which people censor their thoughts.

“Our own representative, Erol Önderoglu, is among those facing criminal charges for simply carrying out his journalistic work. We join the London vigil calling for the immediate and unconditional release of all of Turkey’s jailed journalists, and a stop to the broader press freedom crackdown in the country.”

For those in London on Wednesday May 3,  the gathering is at 5.30pm at the Turkish Embassy, 43 Belgrave Square, London SW1X 8PA.

The International Federation of Journalists (IFJ) has posted a schedule of events happening across the world to mark the occasion. In Iraq, Palestine, Sudan, Morocco, Tunisia, Italy, Cyprus, India, Nepal, Thailand, Indonesia, Belgium, Turkey, Norway, Kenya, Afghanistan and Peru, Burkina Faso, events are being planned to give expression to the theme of “critical minds for critical times.”

Iraq for example is hosting an event focusing on press freedom and the crisis facing journalists’ safety where more and more journalists are in the line of fire, literally as well as politically and legally.

In Palestine a national demonstration is planned in downtown Ramallah in solidarity with 26 Palestinian journalists currently jailed in Israel who are on hunger  strike. “The demonstration will travel to a hill in the outskirt of Ramallah overseeing the Israeli Ofar prison where some journalists are held. ”

Other events are conferences, meetings, protests, workshops, training events, publications of reports and articles (all on the theme of press freedom), the handing out of awards and at least one football match (in Burkina Faso).

Italy will organise a sit-in in front of the Turkish embassy in Rome, where they will read the names of the 149 journalists jailed in Turkey.  This will happen as part of the Festival of Human Rights running from May 2 to May 7 bringing a  multitude of Italian organisations together.

Australia will launch its 13th annual press freedom report on May 2: The Chilling Effect – “The Report into the State of Press Freedom in Australia in 2017; cataloguing concerns with laws, government, courts, national security agencies, whistleblower protection, industry regulation, the gender pay gap, industry redundancies, and impunity.”

This year, as never before, the issue of the right to speak and communicate freely including that of the dissenting or critical voice, has never been so urgent. Reporters Without Borders (RSF) in its annual World Press Freedom Index released at the end of April declared: “Press freedom has never been as threatened as it is now, in the ‘new post-truth era of fake news’, strongmen and propaganda…”

“The 2017 World Press Freedom Index, published today by Reporters Without Borders (RSF), shows that violations of the freedom to inform are less and less the prerogative of authoritarian regimes and dictatorships. Once taken for granted, media freedom is proving to be increasingly fragile in democracies as well. In sickening statements, draconian laws, conflicts of interest, and even the use of physical violence, democratic governments are trampling on a freedom that should, in principle, be one of their leading performance indicators.”

“RSF Secretary General Christophe Deloire said: “The rate at which democracies are approaching the tipping point is alarming for all those who understand that, if media freedom is not secure, then none of the other freedoms can be guaranteed.”

“Where will this downward spiral take us?” he asked.

In the past year nearly two thirds of the countries had registered a deterioration in their situation, while the number of countries where the media freedom situation was “good” or “fairly good” fell by more than two percent, the report found.”

World Press Freedom Day reminds us – as the free-lance international-revolutionary and oftentimes public-enemy-No-1 to a number of regimes shipwrecked on the challenges of human freedom, Thomas ‘Rights of Man’ Paine (February 9, 1737– June 8, 1809) said:

“Those who expect to reap the blessings of freedom must, like men, undergo the fatigue of supporting it.” (The American Crisis‎, 1776)