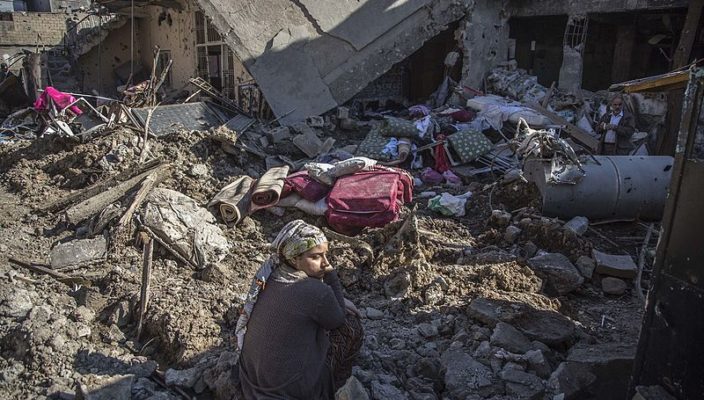 Cizre. Evidence shows these were intentional massacres and deliberate executions that ‘cannot be explained only as a result of the fighting “Even the highest tree has an axe waiting at its foot.” — Kurdish Proverb

June, 2017: Firat News Agency (Ajansa Nûçeyan a Firatê) covered one of the first legal cases to result from the Turkish military’s sieges in that city in September 2015 and December 2015-February 2016.

The curfews imposed in Cizre, the Kurdish town in the Şirnak Province of Northern Kurdistan (south-east Turkey) close to the border with Syria, at that time condemned by Amnesty International and other bodies (including the Turkish Medical Association) continue to go down in history as one of the most brutal suppressions of a civilian population since the Second World War in Europe and in particular for the Cizre basement massacre – the now notorious Basements of Horror – where, in early February 2016, an estimated 130-180 people were burned alive by the military in 3 basements: “…evidence shows these were intentional massacres and deliberate executions that ‘cannot be explained only as a result of the fighting. Some of the claimed dead were allegedly children as young as nine to 10 years old. Some of the totally burned corpses could not be identified.'”

The current case dismissed outrageously by the Turkish Ministry of the Interior as “no fault in service”, involves the assassination of 75 year old Mehmet Erdoğan who was shot in the head by the police on September 11, in Cizre’s Cudi neighborhood as he returned home with bread for his family.

“Erdoğan’s body was not allowed to be retrieved for three days. The body was left to rot on the street, with a bag of bread beside it, only to be retrieved by a delegation that was able to enter the district after the curfew was lifted.” (ANF, 5 June, 2017)

Now, the  Erdoğan family through their lawyers are suing the Ministry of the Interior “for criminal responsibility”.

The response from the Ministry in their defence, as well as ignoring the State’s responsibility to investigate human rights abuses against its citizens, is also outrageous and justifiably worthy of contempt.

In their ‘defence’ arguing that they had no responsibility for this unlawful killing, Mehmet was: “guilty for not complying with the ban and leaving his home during the days of curfew…”

“In the incident in question, it is very clear that no documents or information have been submitted to lead to conclude that the administration is at fault, and considering the circumstances, that there is no fault in service in the context of the incident.”

The defense also said: “There is not a shred of information or evidence to prove that the death incident occurred due to the security forces deliberately targeted and fired shots as claimed in the casefile.”

Tragedy followed by farce if not for the enormous loss of life this conflict has resulted in as well as the grim brutality expressed through numerous allegations of gross human rights abuses, torture and murder carried out with what appears now to be impunity, or rather: “…no fault in service: To speak of the presence of a fault in service in an incident; a malfunction, disorder, inaccuracy, deficiency or disability must have occurred due to necessary orders, directives or instructions not being given, the inspection being insufficient or nonexistent, tools and vehicles assigned for the service being deficient or lacking, necessary precautions not being taken, or not being taken in time, action not being taken or taken late regarding the public service the administration is responsible for providing, and the resulting damages must have been caused by causes listed here.” Turkish Ministry of the Interior.

Tragedy followed by farce by a State that should now hang its head in shame for its failure to protect all its citizens as well as taking responsibility for vindicating their rights (including the most fundamental of all rights: the right to life) and the rights of the families left to pick up the pieces amid the ruins not just of these Kurdish towns and cities and their homes, their family members their livelihoods but of their very hope for the future as well, now..

Reading the absurdity of these state officials in their pompous and meaninglessly inarticulate statements, we can only be bereft of our collective hope that humanity will somehow soon take a giant step beyond these cruel and inhumane outrages perpetrated callously and without criticism or sanction.

We deserve better. And so we raise our voices. We are now asking the Turkish State to take the people’s demands and the demands of the many human rights bodies urging them to ‘clean up their act’ – seriously.

“…now I am poor and miserable in these basements, child.”

“I wish Erdogan’s end will be like this too…”

“I wish the world will crash around your ears, Erdogan…”

(Survivors from Cizre on first viewing the ruins of the basements)…

Footage of Turkish Sniper Fire on civilians seeking the wounded and dead in Cizre, and carrying white flags (including cameraman (shot on camera) Refik Tekin) – 2 people were killed in this shooting. When interviewed  by HRW Telkin said: “I really do not know what would have happened if those ambulances had not shown up. I think they might have killed us all right there and then.”