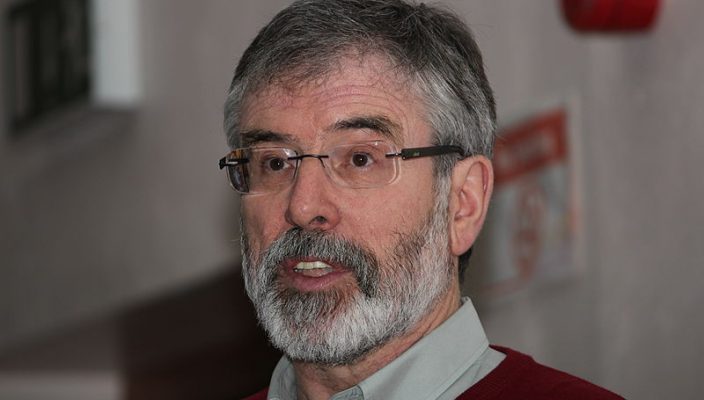 Sustainable basis needed to restore institution in the North

As Martin McGuinness said at the beginning of the year when he resigned; the status quo as it has existed is not acceptable

For the second time this month I am in the  United States of America.

And not for the first time I am writing my weekly  column on the train between Washington DC and New York.

It’s a beautiful  Tuesday evening as the train speeds its way through the American countryside. The sky is largely blue with some clouds rolling across it. RG and I travelled up to DC on Monday evening. Rita O’Hare had warned me to be prepared for hot weather. New York and DC have been experiencing a heat wave with temperatures in the 90’s. I was told that temperatures this week would be in the more ‘bearable’ 80’s. I had to keep telling my American friends that for Irish people temperatures in the 80’s are still a heat wave!As it turned out they were all wrong. The temperature in New York only climbed to the low 70’s and on Monday it rained most of the day.

Washington was the polar  opposite. The sky was blue. The heat was blistering. When RG and I arrived  in DC we first travelled to the Du Pont Hotel for a brief meeting with the British Secretary of State James Brokenshire who is also in Washington to present the British version of the current impasse in the political process.This morning, Tuesday, there was a very nice memorial mass in St.

Peter’s Church in DC for Martin McGuinness. It was a poignant affair organised by Congressman Richard Neal and some of his colleagues who have known Martin for many years and were deeply shocked by his death. Martin’s two sons Fiachra and Emmett travelled over from Derry to join us.

After the mass I met with the Congressional Friends  of Ireland Caucus on Capitol Hill. The Committee members have been good  friends to Ireland and to the peace process going back over two decades.

They share the understandable concern within Irish America about the failure to reach agreement in the recent negotiations around the restoration of the political institutions.There is also a real worry about the political and economic implications of Brexit and the detrimental effect that it is likely to have on the Good Friday Agreement.

I made it  clear to our American friends that Sinn Féin is committed to the re-establishment of the political institutions, but that they must be on a sustainable basis. The institutions have to work for everyone. That means they must serve all citizens. They must also be based on respect, integrity and equality.

As Martin McGuinness said at the beginning of the year when he resigned; the status quo as it has existed is not acceptable.I reminded them that the Irish and British governments have a key role to play in re-establishing the institutions. Many of the rights issues that remain outstanding from the Good Friday and subsequent agreements are the responsibility of the two governments. That means progress must be made on Irish language rights, marriage equality, the Bill of Rights, legacy matters and anti-sectarian measures.

So far, the DUP has resisted agreement  on these fundamental matters that are essential for the political  institutions to be sustainable.This is especially true of the British  government and its refusal to honour its commitments on legacy issues. It has cynically used the excuse of ‘national security’ to frustrate the implementation of the Stormont House Agreement on legacy. In particular, the British government has denied the inquest courts and the Police Ombudsman’s office the funding they need to fulfill their legal responsibilities.

The Lord Chief Justice, Declan Morgan, proposed a plan for dealing with the inquests relating to 97 deaths that have yet to take place. Many of these deaths go back decades. The McGurk bomb attack in December 1971 is just one example. 15 civilians were killed. 46 years there has been no inquest. Last November the families of the victims were told that a British Army file that could shed important light on what occurred will not be released until 2056. This is unacceptable.

As part of its  efforts to side-line legacy issues the British Secretary of State recently said that his government would now consult on the legacy proposals. Most victims’ groups are opposed to this. They believe it is a cynical ploy to delay, delay, delay, dealing properly with legacy. And they are right.

While he is here the British Secretary of State James Brokenshire will meet with some of the Congressional leaders and I urged them to challenge him on these matters.I also reminded our Congressional friends that the second IRA cessation, which paved the way for the all-party talks that led to the Good Friday Agreement, took place 20 years ago this month. They and the Clinton Administration, and Irish America, played a pivotal role in helping to create the conditions for the cessation to happen.

Despite the difficulties  a lot of progress has been made in the two decades since and it is possible  to make more if everyone committed to the Agreement stay focused on resolving the remaining issues that have given rise to the current difficulties.For this reason, we still need the support of Irish America and our friends on Capitol Hill, and their ability to influence US government policy as well as the Irish and British governments.Finally, our discussions touched on the issue of Brexit. The implications of Brexit and the likely imposition of a hard economic border on the island of Ireland, was very much on the minds of those Congressional leaders I met. Their concerns have been heightened following last week’s inconclusive Brexit negotiations between the EU and British government.

Michel Barnier the EU’s  Chief negotiator on Brexit warned that there are‘fundamental divergences’  between the British and EU. He also told journalists last Thursday July 20th that more detailed discussion is needed on how to protect the Good Friday Agreement and ‘in particular more work needs to be done to protect North-South co-operation.’I took the opportunity to set out our view that the best way to defend the Good Friday Agreement and to ensure that the two economies on the island of Ireland are protected is for the North to be designated special status within the EU.

That is the only way to respect  the majority vote in the north to remain.Following that meeting it was a  working lunch with the State department and then a short taxi journey back  to Union Station and the 4pm ACELA express to New York. It takes three hours but the train ride is generally smooth and it has provided the opportunity for me to scríobh (write) these few words. See you back home.