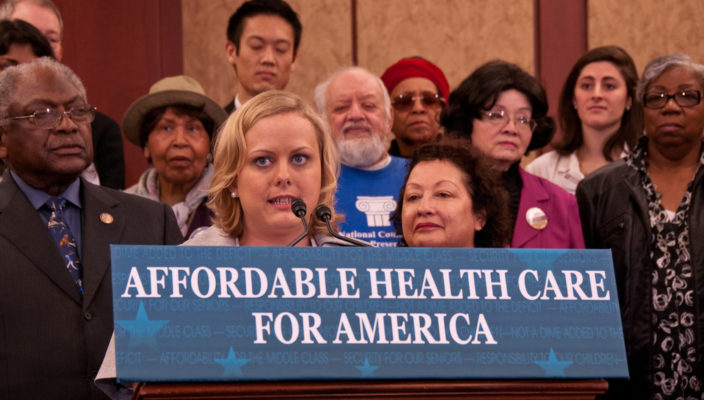 UNITED STATES HEALTHCARE: “My health care shouldn’t be a market!”

The battle over the necessity to have healthcare is a flashpoint now, as the ruling class moves to make it completely pay-to-play, and everyone else can go die. The government must take over these giant healthcare conglomerates and run them in the people’s interest.

“Without health care coverage I’m dead or bankrupt!” said one person in the audience. ”Health insurance as a for-profit business is immoral”, shouted out another, to applause. “My health care shouldn’t be a market! When did we become a society that doesn’t care about each other?”

These truths were voiced by people at a Republican-sponsored Town Hall meeting in Willington, NJ, (as quoted in a May, 2017 Rolling Stone magazine article).

Demanding healthcare as a right, people all over the country are organizing to pressure the government to provide single-payer free healthcare, where none are left out and everyone covered, with no deductibles or co-pays, paid for largely by taxes on the wealthy.

The attempt to repeal the already-inadequate and profit-driven ACA (Affordable Care Act, or ‘Obamacare’) and replace it with one that would have deprived 20 million people of coverage, and given the wealthiest an estimated $800 billion tax break, raised public resistance and fury. People are speaking up and organizing for a universal healthcare system that provides for their needs instead of lining corporate pockets. H.R. 676, Congressman Conyer’s Single Payer healthcare bill, is one of these proposals. Bernie Sanders is mobilizing a nation-wide campaign to support similar legislation he will introduce in the Senate.

Medical technology is so advanced today that prosthetic limbs can be made with a 3D printer, and millions of medical records read and digested by a computer program. Cutting-edge research on nutrition, prevention of disease and cures are constantly adding to medical knowledge, yet these healing arts are out of reach for more and more working and poor people, because of their crushing costs and the dysfunctions of the profit-driven heath care system.

Under capitalism, labor-replacing production, with computers and robots doing the jobs humans used to do, means the capitalist class of billionaires have no reason to keep alive those they no longer need to exploit. On the other hand, people are demanding that the government provide them with what they need to survive. The battle over the necessity to have healthcare is a flashpoint now, as the ruling class moves to make it completely pay-to-play, and everyone else can go die. The government must take over these giant healthcare conglomerates and run them in the people’s interest.

The assault on healthcare is one shot in the war against a whole growing class of people the capitalist system has abandoned. The struggle for the right to healthcare is in reality a demand that the government provide for the needs of all. This can only be done under a cooperative economic and political system.

Will we have the rule of the people, true democracy, or corporate rule, with obscene wealth for the few who profit from such corporate enterprises as the monster pharmaceutical and insurance companies? Will healthcare be a commodity for sale, or a priority and a guaranteed right? The struggle for that right is one that will help define what kind of a future we as a people have—one of health and wellbeing, or needless death and misery for millions? The fight for universal healthcare is a fight for the kind of society and culture that provides these things for all, according to need.