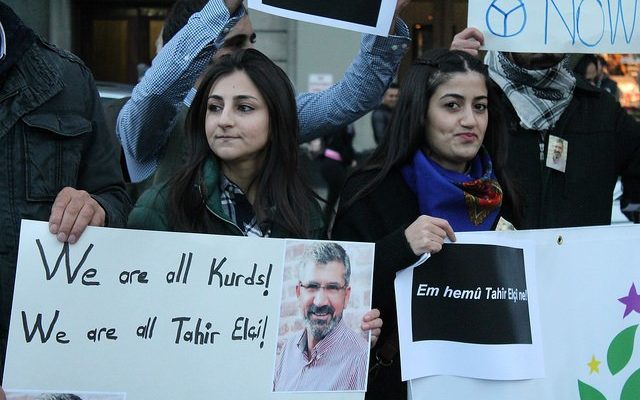 On a day this week, 28 November, 2015, Tahir Elçi, Kurd, Lawyer and Human Rights defender was shot in Diyarbakir, Northern Kurdistan

On a day this week, 28 November, 2015, Tahir Elçi, Kurd, Lawyer and Human Rights defender was shot dead with a single shot to the head as he called for an end to violence at a public meeting held beside the “Four-legged Minaret” of the Sheikh Matar Mosque, in Diyarbakir, Northern Kurdistan (South-East Turkey). “The situation is very bad, but I’m afraid that it will be worse. Every day it will be worse. As we understand, the PKK doesn’t want to leave the city centers or leave its military activity in the civilian areas. The security forces and the other side confront each other. Everybody is worried about the next days…” he had said in an interview with Time magazine on November 9th, in what was to be one of his last interviews.

In his speech on 28th November, he appealed for a return to peace talks between the Turkish Government and the Kurdistan Workers Party (PKK).

His last words before he was assassinated were: “We don’t want clashes, guns and operations in this ancient place.”

Active as a human-rights lawyer since the 1990s, Tahir Elçi (born in 1966) as well as being a Kurdish lawyer was chairman of the Diyarbakır Bar Association and had played a critical role in investigating alleged abuses by the Turkish state.

‘”The moment the statement ended, the crowd was sprayed with bullets,” a local official from the pro-Kurdish HDP party, Omer Tastan, told Reuters’, the BBC reported the next day.

Since the breakdown of the ‘Solution Process’ between the Kurdistan Workers Party (PKK) and the Turkish Government which has resulted in open warfare since July 2015 in Northern Kurdistan, Elçi had appealed for a return to the peace process and had requested permission to visit the PKK’s imprisoned leader, Abdullah Öcalan, towards this end. His request was rejected; “…we understand that the government wants the armed clashes to continue. I think both sides want this,” Elçi said. As critic of the Turkish government’s “security operations” in Northern Kurdistan, “he led fact-finding missions into the recent curfews imposed on cities and towns in southeast Turkey, including Cizre, Silvan, Bismil and Nusaybin, and documented human rights violations by the security forces against civilians.” (Human Rights Watch)

In 2011, in an open letter on the killing of Sergio de Mello the Special Representative in Iraq of the United Nations Secretary General, he had commented on the situation of Human Rights in Turkey:

“Despite various reforms adopted in order to fulfil the European Union criteria in the last two years, in practise no serious progress has been recorded. In our experience, we can say that the reasons for impunity in Turkey are, firstly; ignorance of human rights and insensitivity on the part of society to human rights violations. Secondly, the authorities’ protective attitude towards those responsible for human rights violations; and, thirdly, the ineffectiveness of the judicial machinery and tolerance shown towards perpetrators. Thanks to the determined attitude of human rights defenders, I can say with happiness that official tolerance towards human rights violations – most of all torture – is showing signs of decline”.

Tahir Elçi had been detained several times and received death threats after saying the banned Kurdistan Workers’ Party (PKK) should not be regarded as a terrorist organization. On 23 March 2014, he was the lawyer for the Kuşkonar massacre case in the ECHR, in which Turkey was condemned for carrying out the intentional massacre of Kurdish civilians on 26 March 1994 and blaming it on the PKK. “He himself was a victim of torture and arbitrary detention, amongst other abuses, facts recognized by the European Court of Human Rights before which he and his colleagues also successfully brought their own case.” (Human Rights Watch)

In October 2015, he was detained on charges of disseminating “terrorist propaganda” on behalf of the PKK. “Although Elçi’s comments fell squarely within the boundaries of protected free speech, a prosecution against him for “making terrorist propaganda” was due to begin in April 2016,” Human Rights Watch reported.

While no one has yet been charged with his murder, the Peoples’ Democratic Party (HDP) had called the shooting a “planned assassination,” and Elçi’s brother, Ahmet Elçi was quoted as saying that his brother was murdered by the state: “My brother is not our first martyr and neither will he be the last,” he said at the funeral. “As a Kurdish intellectual, he was slain by the state. We have seen this state murdering Kurdish intellectuals throughout history. But we will not give up and we will win.”

Protests erupted in Istanbul, Ankara, Izmir and Diyarbakir following the news of his death. On Istanbul’s central Istiklal Street people chanted “We are all Tahir Elci” and “You can’t kill us all,” accusing the state of complicity in the attack,  the BBC also reported at the time.

“I remember thinking at the time that this was all a dream: that I would wake up beside Tahir as the dawn light crept through the curtains and I would tell him about it. Or maybe I would not tell him about the dream, so as not to upset him.” Türkan Elçi, Tahir’s wife, wrote, on the first anniversary of his death.

In an interview on IMC TV, Selahattin Demirtaş, the HDP leader currently on trial himself in Turkey, claimed that according to their investigators, the bullet which killed Tahir Elçi was fired by a Turkish police officer.

“But the full story of the killings on our soil is a much longer story. It is a story of a land turned into a battleground. A place where death rather than the right to life, has become sanctified and where the actions of the killers have dragged the innocents into their macabre game.

By killing those who stand against war, they made us part of it.” Türkan Elçi said.

Cale Salih, in her memorial piece in the New York Times on December 1, 2015 wrote:

“Tahir was an exceptional figure because he could coherently translate the Kurdish issue to Turks in the western part of the country. It feels inadequate to describe him as a moderate, but that is what he was in the finest sense of the word — sober, tolerant, and thoughtful. In each deadly conflict, there are only a few precious bridges like him. His death is now part of the history of this conflict, and will play a role in shaping its future.

“Tahir was killed in front of everyone’s eyes, gunned down while the cameras rolled. But the hopes of those who demand peace did not die with him. Instead his loss has strengthened our belief that, in order to create a better world and look toward tomorrow with hope, we must overcome the imaginary boundaries that divide us. We must stand shoulder-to-shoulder beside the oppressed and help the victims awaken from their winter sleep.” Türkan Elçi

Tahir Elçi, Kurdish lawyer and Human Rights defender, was assassinated in Diyarbakir’s besieged Sur district on a day this week, the 28th November, 2015.

He is buried in the Yeniköy Cemetery in Diyarbakir’s Bağlar district.

Press statement by Tahir Elçi just before he was shot

Images of the attack that killed Tahir Elçi