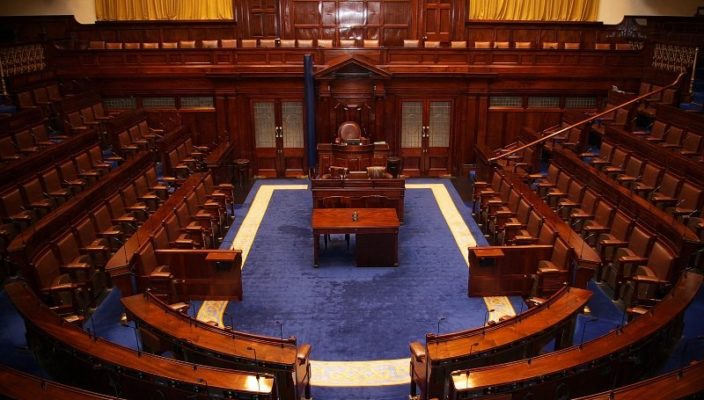 December 14, 2017: “Considering the current conditions in Turkey, and in light of President Erdoğan openly calling his political rival a “terrorist”, what do you think about whether Demirtaş will have a fair trial or not?

Seán Crowe, Sinn Féin Deputy for the Dublin South-West constituency in the Irish Parliament (Dáil) and who headed the Sinn Féin delegation to the Forum for Peace and Reconciliation as well as participating in the peace talks back in the 1990’s, has voiced many people’s concerns here in Ireland at the situation facing the imprisoned HDP Co-chair Selahattin Demirtaş and other arrested HDP deputies. As an opposition deputy his questions were addressed to the recently promoted Deputy Prime Minister (Tánaiste) and Minister for Foreign Affairs and Trade, Simon Coveney. Mr. Coveney has also been Deputy Leader of Fine Gael since June 2017.

“Are you aware of the trial of Selahattin Demirtaş that started on December 7, 2017 and furthermore, that he hasn’t been allowed to participate in his own trial?

– Considering the current conditions in Turkey, and in light of President Erdoğan openly calling his political rival a “terrorist”, what do you think about whether Demirtaş will have a fair trial or not?

– What do you think about the remaining HDP members and MPs in prison?

– Is an officer of Ireland’s Turkish Embassy monitoring this high profile case?”

“Mr. Crowe will remember that the previous minister before me had issued a statement expressing serious concern when Peoples’ Democratic Party (HDP) Co-chairpersons Figen Yüksekdağ and Selahattin Demirtaş were arrested in November 2016. Along with representatives from other embassies, a representative from our Ankara Embassy attempted to attend Figen Yüksekdağ’s hearing in July and Selahattin Demirtaş’s hearing in December, but failed. Authorities offered Demirtaş only a video conference method for him, so Demirtaş himself wasn’t present in the court either.

Despite the precarious security situation in Turkey following the coup attempt in 2016, the rule of law, freedom of expression and the reign of democracy are of vital importance. Elected MPs being detained and arrested is particularly concerning.

I have stated time and time again that legal procedures including the presumption of innocence and the right to a fair trial must be implemented for everybody put on trial in Turkey. Selahattin Demirtaş’s pre-trial detention was already long, and I worry that the transparency necessary for this case won’t be present. Our Embassy in Ankara is in regular contact with other HDP Parliamentarians and will continue to monitor both cases as closely as possible.

Meanwhile, I repeat the previous calls for Turkish authorities to build a dialogue as the suspended issues can only be resolved through political means. Turkey is a candidate for the European Union, and has thus promised to comply with European values. Turkish authorities need to continue a constructive dialogue in the matters of human rights and the rule of law including the Council of Europe.”

Earlier in the year Deputy Crowe had also drawn attention to the increasingly authoritarian rule of the Turkish President:

“Deputy Seán Crowe asked the Minister for Foreign Affairs and Trade Charles Flanagan his views on the state of democracy and human rights in Turkey and the state of emergency that allows President Erdogan to rule by decree, which is to be continued indefinitely; his further views on the fact that these powers have to date allowed the Turkish Government to jail more than 40,000 persons, fire or suspend more than 140,000 persons, shut down circa 1,500 civil groups, arrest at least 120 journalists and more than 150 news media outlets; and his further views on the health and well-being of the Peoples’ Democratic Party Members of Parliament that remain in jail in Turkey.” [Dáil Debates, 2017]

One can only wonder now if Turkish President and Chairman of the ruling Justice and Development Party, Recep Tayyip Erdoğan, is listening and if so, whether he would consider that this exchange constituted an “insult to Turkey, the Turkish nation, or Turkish government institutions” as per Article 301 of the Turkish Penal Code, a crime many who have voiced their concerns at the current situation in Turkey are now being charged, convicted and imprisoned with?