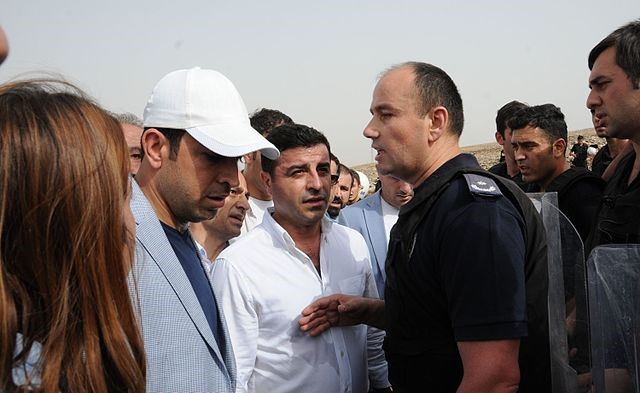 TURKEY ON TRIAL a.k.a. The Trial of Selahattin Demirtaş

The co-chairperson of the left-wing People’s Democratic Party – HDP – Partiya Demokratîk a Gelan – Selahattin Demirtaş, arrested on November 4, 2016 and now, following his non-appearance in court one week ago on Thursday 7 December his detention has been extended

“Despite efforts to prosecute our parliamentarians, including myself; despite the arrest or dismissal of our elected officials; despite the Turkish media blackout on our party imposed since July, many democrats in Turkey continue to stand with us in our struggle for peace. But the world fails to notice.” Selahattin Demirtaş

It would seem there is little difference now between being innocent or guilty in post-coup Turkey as the length of pre-trial detention and the delays in getting to trial, to say nothing of the charges that the State Prosecutor will present to you, guarantee your lease on an uncomfortable Turkish prison cell.

This is the situation for the co-chairperson of the left-wing People’s Democratic Party – HDP – Partiya Demokratîk a Gelan – Selahattin Demirtaş, arrested on November 4, 2016 and now, following his non-appearance in court one week ago on Thursday 7 December (his presence at his own trial being considered too dangerous and he himself refusing to ‘attend’ via video link from his jail in the northwestern city of Edirne), his detention has been extended by the sitting judge in agreement with the demand of the Prosecutor that Demirtaş not be released.

The same prosecutor is demanding 142 years imprisonment for an array of “terrorist” charges mostly based on his “press releases, speeches at conferences, panels and similar legal and political activities…”

The HDP, in its statement on December 4 stated: “The criticism Mr. Demirtaş  raised against the ruling party in his speeches within his political and public activities has been considered as a crime, he has been labeled as “terrorist,” “traitor” or “enemy“”.

The apparently crudely-assembled indictment against Demirtaş runs to 501 pages.

“…300 out of the 501 pages of the indictment involve press releases and the speeches at conferences, panels and similar legal and political activities.” (HDP)

Despite the attendance of human rights advocates from the European Union and other international observers refused entry, the small courtroom in the Sinkan Prison Complex about 18 miles outside Ankara, (Sincan prison was chosen two days before the trial because of security concerns. Ankara, as a venue, was, like Demirtaş’ own attendance, seen as potentially too dangerous) was packed. From this gloomy venue, the Ankara 19th Criminal Court ruled that Demirtaş remains arrested pending trial and the next hearing was scheduled for February 14, 2018.

Demirtaş’ lawyer, Ercan Kanar said at the hearing: “The law is not the place for settling political accounts. The place to settle political accounts is in front of the people. We demand you refrain from issuing verdicts that will be the sword in the government’s hands. This lawsuit has been filed in violation of laws and international law. This indictment has no place within the law, and has been prepared under solely political purposes.”

Selahattin Demirtaş is not alone. The party’s other now-ex-co-leader, Figen Yüksekdağ, also sitting in a Turkish cell pending trial on terrorism charges, (Yüksekdağ, had her seat in Parliament as well as her Party membership taken from her and was replaced by Serpil Kemalbay on 20th May as the co-leader of the Peoples’ Democratic Party), was also remanded in custody by an Ankara court on Wednesday. Nine of the party’s MPs are currently in prison along with 85 mayors and an estimated 10,000 activists. Demirtaş, an MP for Istanbul, has been leading the HDP along with Figen Yüksekdağ since its foundation in 2012.

The Party, like other elements of any opposition in post-coup Turkey, now faces the iron fist of President Erdoğan’s increasingly totalitarian regime since the collapse of the Kurdish – Ankara Solution / Peace process in July 2015 and the resumption of military attacks on the PKK (Kurdistan Workers’ Party) and the Kurdish civilians of South East Turkey – Northern Kurdistan.

In addition, during these first weeks of December that sees the people’s democratically elected Deputies still behind bars, a motion was filed against 19 more HDP deputies for disseminating propaganda on behalf of the outlawed Kurdistan Workers’ Party (Partiya Karkerên Kurdistanê‎).

What’s Turkish President and Chairman of the ruling Justice and Development Party, Recep Tayyip Erdoğan, afraid of, you might ask?

In June 2015, the HDP stood for the first time in a national election, breaking the arbitrary 10 per cent barrier and winning 80 seats in Turkey’s Grand National Assembly (Turkish: Turkey Büyük Millet Meclisi). This was a major defeat for the dominant AKP ending its ruling majority (AKP won 258 out of the 550 seats, 18 seats short of a majority). This 13 percent of the vote for the HDP cost President Erdoğan and the AKP a mandate to form a single-party government for the first time since its coming to power in 2003. Not to be out-done the AKP refused to form a coalition with any of the opposition parties and instead chose snap elections for the following November. Strangely enough at the same time the two years old ongoing peace talks with the PKK dramatically collapsed. This new election was called on the back of the resumption of a vicious assault on the Kurdish communities of the south east…between lengthy curfews and assaults using heavy weaponry with significant civilian causalities, in places like Cizre (where over 150 civilians were burned to death in ‘the basements of horror’) and in the Sur district in ancient Diyarbakir…destruction that has resulted in an estimated 1 million Kurds now homeless. In such a climate these 80 HDP seats could not be held on to…

“Our victory in June elections alone denied the ruling nationalist/sectarian party its 13-year single party reign. From there we became the enemy to be defeated at all costs. President Erdogan craftily blocked the formation of a coalition government, declared us “terrorists” immediately after the elections, ended the peace process entirely and took the people back to the horrors of civil war from the 90s.

…Of course Erdoğan had reasons to panic. As a new party, we had entered the parliament in June with 80 parliamentarians and were determined to challenge his authoritarianism and unconstitutional use of presidential powers.”

Now: “The costly war has been ripping through Kurdish cities and destroying the very concept of our unity. Nearly 400 civilians, hundreds of Turkish security forces and an unknown number of Kurdish militants have lost their lives. Erdoğan managed to get his party’s vote from 40 to 50 percent within months, but at the cost of ravaging the country.”

England’s Morning Star Newspaper who sent Steve Sweeney to cover the trial  (and, along with the other international observers, was denied permission to attend the hearing) says:

“If Erdoğan was Putin or Assad, Turkey would almost certainly have faced sanctions and if there were natural resources, probably bombing, invasion and an attempt at regime change. Instead Turkey is sold weapons and perversely the British government believes the best way to influence Ankara is to increase trade and arms sales.

All this does is strengthen the arm of Erdoğan and makes the British government complicit in the oppression and suffering of the Turkish people. As with so many other human rights abusers, Britain has placed its strategic aims above the human rights of others.”

In the same article in 2015 in Newsweek, some months before his arrest, Selahattin Demirtaş also  wrote:

“In Diyarbakir, where I am on this mild February winter day, I have been hearing the sounds of gunfire and artillery for hours.  I wonder how many people could have died today. We are supposedly a candidate country for the European Union but it is impossible to tell that from the tanks that are firing inside our cities and round-the-clock curfews lasting weeks at a time.

We occasionally have an international delegation that takes an interest in the plight of the Kurds. But generally speaking, all that Europeans want to talk about is the refugee crisis and all that Americans want to focus on is the fight against ISIS. Understanding that both are serious problems and pose an existential threat for the world order, it is difficult for us Kurds in Turkey to understand why our own tragic predicament, intricately related to both issues, is ignored by the world…

Despite efforts to prosecute our parliamentarians, including myself; despite the arrest or dismissal of our elected officials; despite the Turkish media blackout on our party imposed since July, many democrats in Turkey continue to stand with us in our struggle for peace. But the world fails to notice.”

Despite the Turkish State’s ban on protests for 3 days prior to the trial (in response to the HDP calling for massive protests), a crowd of several hundred nevertheless gathered to show support for Demirtaş “in snowy weather outside the court near the capital Ankara…”

“Demirtaş is our honour,” they chanted.

Luckily, during a time and in a place where dark deeds are becoming the norm, we are blessed that someone is keeping hope, integrity and honour alive in our fragmented world…

“Three days before the hearing, the court board rescinded the interim verdict on the casefile on December 11. The court has sent a notice to the Edirne Type F Prison where Demirtaş is currently held and demanded Demirtaş be brought to the second hearing of the case on December 14.

The notice sent by the Court to the Edirne High Security Closed Prison on December 11 is as follows:

“In accordance with the interim verdict issued during the open trial of the public case filed to our court against suspect Selahattin Demirtaş and his companions charged with insulting the Turkish nation, the Turkish republic and Turkey’s Grand National Assembly, the court requests that suspect Selahattin Demirtaş, whose identity is stated below and who is currently on remand for another crime, be brought in person to the court hall on 14/12/2017 at 09.00.” (ANF News)

HDP supporters being stopped from walking to Cizre, where there was a curfew in place for 8 days.

Read the Statement of the International observers arbitrarily denied access to hearings:

“We as the international observers delegation have been denied the right to watch the hearings that have taken place over the past two days. Justice cannot be done behind closed doors. It must also be seen to be done.”

Margaret Owen – Lawyer, Director at Widows for Peace through Democracy

Ali Has – Lawyer,  Law Society of England and Wales

Nov 4, 2016: Police clashed with protesters in Ankara, during a demonstration held to oppose the arrest of several members of the People’s Democratic Party (HDP) leadership. HDP co-leaders Selahattin Demirtas and Figen Yüksekdağ were arrested by Turkish authorities alongside parliamentary group leader for the HDP Idris Baluken, during police raids in the early hours of Friday.