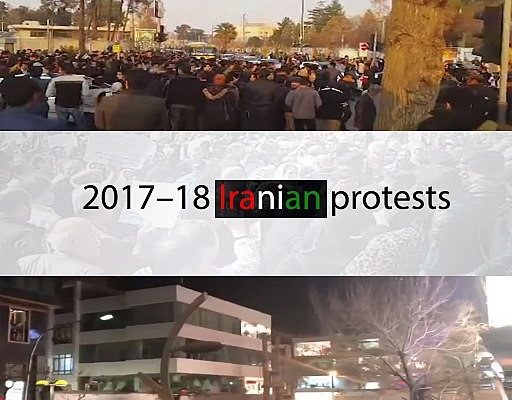 IRAN: a new kind of protest movement is taking hold

When the news broke about a protest in Mashhad, Iran’s second largest city, in the waning days of 2017 no one thought it would lead to a national rally against the government

“Whereas 2009’s Green Movement mostly comprised middle-class and affluent Iranians who demanded democracy and political reform, today’s protests come mostly from working-class and low-income families fed up with Iran’s unjust distribution of wealth and the corruption that exacerbates it.”

When the news broke about a protest in Mashhad, Iran’s second largest city and a stronghold for the country’s religious hardliners, in the waning days of 2017 no one thought it would lead to a national rally against the government. But since then the demonstrations have rapidly spread to Iran’s other provinces and have left the political elite shocked and baffled.

It’s hard to believe that a regime with such a strong regional position, and one that just recently held a successful presidential election with a wide range of participants, is in trouble. All parts of the Iranian establishment have duly responded with various forms of denial.

The country’s political reformists see the protests as a plot by hardliners against the president, Hasan Rouhani, and his moderate government. Iran’s vice-president, Eshaq Jahangiri, implicitly blamed hardliners and said “those who are behind such events will burn their own fingers”.

Similarly, hardliners are ignoring the fact that the protesters are venting their anger against the religious regime as a whole. Instead, they are framing the protests as a spasm of rage against the elected government’s economic policies. As the protests spread and grew, one of Iran’s most conservative newspapers, Kayhan, denounced the Rouhani government and said the protesters were angry that it had “ignored” its own election slogans and promises.

But the last seven days have indicated that the protesters are neither lackeys of the hardliners, as the reformists would have it, nor just unhappy with Rouhani’s government, as the hardliners claim. Indeed, they are representing a new movement: the “economically marginalised people movement”. And this movement is unlike any other seen in post-revolutionary Iran.

Those who show up

Whereas 2009’s Green Movement mostly comprised middle-class and affluent Iranians who demanded democracy and political reform, today’s protests come mostly from working-class and low-income families fed up with Iran’s unjust distribution of wealth and the corruption that exacerbates it. These Iranians know that their country has some of the world’s richest natural resources, but they also know that the revenue that should be spent on them is instead siphoned off to fund the government’s foreign adventurism. And so goes their chant: “Leave Syria, do something for us.”

In addition, the current movement, unlike the Green Movement, has no specific leader, and its demonstrations are mostly organised via Telegram, Iran’s most popular messaging app. While having no leadership can be a negative point for any movement, it also can have its benefits. The Green Movement came to an end when the regime placed its leaders under house arrest. But when Telegram was blocked in Iran to stymie the growing protests, the movement kept going; people have started to use virtual private networks and proxy servers, and they now have access to Telegram again.

Previous protests in post-revolutionary Iran were hardly national movements. The student protests in 1999 against the closure of Salam, a reformist newspaper, were confined to Tehran. Conversely, the current movement in Iran extends across the country; even in Qom, a very conservative city where unrest is usually thought highly unlikely, people have been out on the streets chanting against the regime.

Until these demonstrations began, big social movements in Iran were principally organised by reformists – but this time, reformist leaders are withholding their support. As the most powerful challenger to the hardliners, whom they have to fight to win over the broad middle of Iranian public opinion, the reformists have no interest in backing what can be described as a left-wing movement, at least in terms of who its participants are. Equally, the protesters clearly don’t think their economic grievances can be settled within the current reformist discourse.

So if the protests continue to grow and the reformists still want to be Iran’s main opposition voice, they may soon have no choice but to accommodate at least some of the demonstrators’ demands in their political agenda. If they do not, their political struggle could soon be hijacked by something entirely new.

By Mohammadmosalman (Own work) [CC0], via Wikimedia Commons

Iranian authorities are blocking access to Telegram for the majority of Iranians after our public refusal to shut down https://t.co/9E4kXZYcP9 and other peacefully protesting channels.