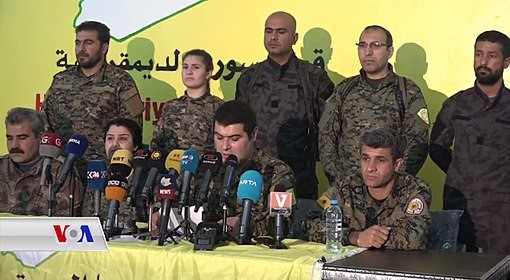 The Syrian Democratic Forces (SDF) are the official defense force of the Democratic Federation of Northern Syria – Rojava. They released their statement “The Historic Resistance – the balance sheet against the Turkish invasion” at a Press Conference on January 24th 2018.

The invading army carried out a Howitzer attack on January 22 from 23.00 to 06.00 the next day from Cindires to Bircike Sileman in Sherawa. At the same time, the invading army and their gangs were detected by our forces as they attempted to attack the Batman hill from the Baxtiyar hill front and have been pushed back in a harsh retaliation.

A tank of the invading army has been destroyed following intense clashes there and 150 gang members and soldiers have been killed. There are 4 gang leaders among the dead. The alias of one of the gang members is Ahmed Feyyaz. 2 of our fighters have been wounded in this operation.

The attacks from the Iska Hill front have been broken by our forces. The invading forces have resorted once again to civilian massacres after the break. In attacks against the Cindires district and its villages and the Hemam village, a total of 6 civilians have been martyred and 16 have been wounded. There are women and children among the massacred.

Turkish soldiers and their allied gangs continued to attack the Shera district. The Qestelê hill, Qestelê village, Xedamat, Vîla Qadî, Baflon hill and Dîkmedaş were bombed with tanks and Howitzers. The gang attacks from land on the Qestelê Hill and Merenazê were retaliated against harshly and pushed back. An armored digger was damaged and confiscated by our fighters.

Our fighters carried out a revolutionary operation on the Qurnê village and hit the gangs hard. The revolutionary operation our fighters carried out resulted in intense clashes and our fighters regained control of the Qurne hill in the village. One gang member’s body was confiscated by our soldiers here. On the Shiltahte front, our fighters retaliated against the gang attacks and targeted a gang front. The gang front was completely destroyed and 3 bodies were confiscated. Reports say there are large numbers of casualties on this front while there is no concrete information on how many yet. The invading Turkish army has bombed the Gir hill and the villages in and around Bilbile and Shexurze with jets, and attempted to advance on land at the same time. Their attack on land has been broken, while mortar fire into the area continues.

Our fighters launched an operation against Turkish gangs on the Shiye front. The Çeqela village has been completely cleared of gangs. The invading Turkish army continues to fire on villages around this front with tanks and Howitzers.

Gangs wishing to advance in the area between the Qudê and Omera villages were met with the harsh resistance of our fighters. In the intense clashes that ensued, the Qudê village and Qudê Hill were completely cleared of gangs. Bodies of 37 Turkish gang members killed in clashes in this area were taken to Azaz and some casualties were taken to Turkey. In clashes here, 2 armored and 1 non-armored military vehicles were destroyed. In ongoing clashes in the Omera village, one vehicle used to transport gang members has been completely destroyed. There is no concrete information on the number of casualties. In the Kumreş village, an Akrep type armored vehicle has been confiscated by our fighters. In clashes in this area, one of our fighters has been martyred during a heroic resistance. Another fighter has been wounded. Turkish fighter jets bombed the Raco and Moseka hills.

Our fighters retaliated harshly to the gang attacks as they attempted to advance through the Shehba front and prevented the advance. On this front, 7 gang members were killed and a DHSK laden vehicle was destroyed. Our fighters retaliated against the attacks on the Kil Cibrin front harshly as well. 5 gang members were killed there. Mortar and Howitzer fire on Shex Isa continues.

The invading Turkish army continued to attack the Kobanê and Cizirê cantons. Turkish soldiers attacked Qamishlo with tanks this morning, and caused material damage in civilian residential areas. Gangs under the Turkish army attacked the Zormixar village to the east of the Kobanê Canton with mortars and Howitzers from the Jarablus side.”

« Statement of the Democratic Self Administration of Rojava in relation to the attacks on Afrin Disastri: «Mancata manutenzione: i soldi ci sono ma vengono gestiti male» »