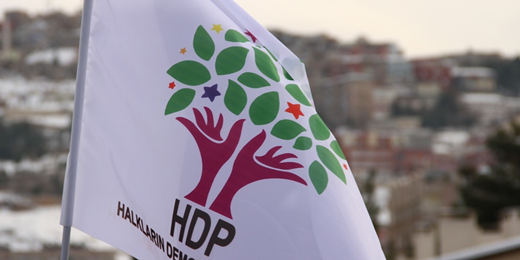 An urgent call by our Central Executive board to the international institutions including the United Nations, the European Parliament, the European Commission; the political parties of the world; and embassies to take action to stop Turkey’s invasion of Afrin:

The Peoples’ Democratic Party (HDP) condemns Turkey’s invasion of Afrin region in Northern Syria in collaboration with mostly Salafi/jihadist Syrian militia and invites the international community to take immediate action to stop it.

This invasion is spreading the destruction of the war in Syria into Afrin, which has remained a relatively safe area until recently. Despite the severe Turkish-Syrian-jihadist blockade, Afrin has been a safe sanctuary for hundreds of thousands of Syrian IDPs from other war-torn parts of the country. This military intervention, particularly the airstrikes targeting residential areas, has brought havoc and misery to this region of relative peace. At least 86 civilians, including children and women, have been killed due to airstrikes and shelling of villages and towns.

The Turkish army is carrying out this attack together with several jihadist groups, which is destroying peace and security in Afrin, giving a fresh breath to ISIS and similar organizations, and undermining the already fragile political process toward a settlement in Syria. Videos of collaborating jihadists vowing to destroy Afrin and kill every Kurd there are rampant on social media. Turkey had used such jihadists for regime change in Syria. Now, Turkey is seeking cooperation with the Syrian regime to reposition them in the war it declared against the Kurds.

This attack targets the Kurds as a people and their political gains in Syria. The alleged “security threat” is a pretext to destroy the pluralistic, gender egalitarian and autonomous self-government that is being implemented in Afrin and Northern Syria. Another openly expressed aim of this invasion is to change the demographic composition of Afrin by displacing the Kurds and settling in the FSA militia and hundreds of thousands of Syrian citizens currently living in Turkey. This is a clear breach of the Geneva Convention.

This attack clearly violates international law. The Turkish government’s justification of this invasion by referring to Article 51 of UN Convention and decisions numbered 1624 (2005), 2170 (2014) and 2178 (2014) of UN General Assembly is simply ungrounded. There has been no single attack from Afrin into Turkey. Also, the UN and international community do not view Kurdish forces in Afrin and Northern Syria as “terrorists.” Furthermore, Turkey should have consulted with the relevant UN authorities before taking such action. That is, according to the very UN Convention and decisions referred to by the Turkish government, this invasion is neither a case of “fighting terrorism” nor “self-defense;” it is an unprovoked attack on the Kurds and their political existence. Let’s also remember: Representatives of Syrian Kurds, now vilified as “terrorists” and attacked by the Turkish government, were officially invited to Turkey several times by President Erdoğan himself between 2013 and 2015.

President Erdoğan has launched his presidential election campaign by invading Afrin. Attacking the Kurds, he believes, would consolidate the support he has been receiving from his nationalist allies. Simultaneously, he is using the climate of war to further the repression on the Kurdish and democratic opposition, who have already been under incessant attacks under emergency rule since July 2016. The government is encouraging war propaganda and punishing pro-peace people. So far, over 200 people have been taken into custody, mostly HDP executives and members, and many of them were jailed simply because they defended peace and criticized militarism.

We hereby call upon the international community to take a principled stance and not remain silent in the face of such an attack on the Kurds in Syria, who have sacrificed many lives in the fight against ISIS. It is of utmost importance to challenge the validity of arguments seeking to justify this invasion by establishing the naked fact: the unlawful and unacceptable nature of the invasion on Afrin. Democratic governments, national parliaments, transnational institutions such as the UN, NATO and Council of Europe, NGOs, the media, art communities, peace and human rights activists all can and should play a role to stop this ground invasion and aerial bombardments.