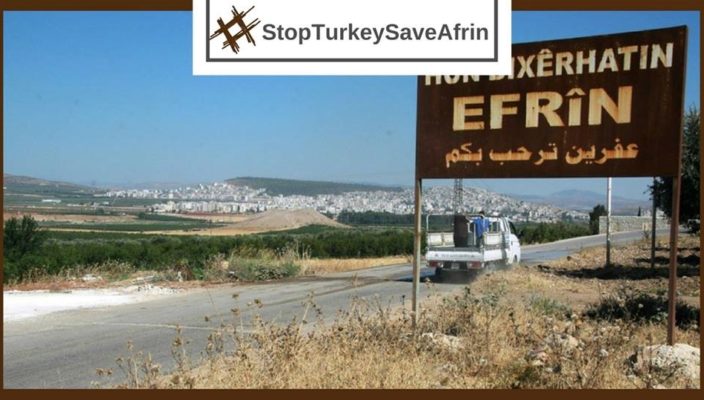 “Turkey is ready to launch a large-scale military operation in northern Syria, and even to annex Manbaj and Raqqa to its areas of influence to prevent the establishment of a Kurdish state.”   Over the last decades, especially in the 1920s and 1930s, successive Turkish governments repressed many Kurdish uprisings, denied the existence of the [&hellip

“Turkey is ready to launch a large-scale military operation in northern Syria, and even to annex Manbaj and Raqqa to its areas of influence to prevent the establishment of a Kurdish state.”

Over the last decades, especially in the 1920s and 1930s, successive Turkish governments repressed many Kurdish uprisings, denied the existence of the Kurds and followed a policy of denial, marginalisation and exclusion of the Kurds. However, with the end of each uprising, the Kurds were increasingly adhering to their cause and proving their ability to re-organise themselves and resume their struggle for their legitimate national, socio-cultural and political rights. The Kurds are not willing to give up their struggle especially now that their issue has gained regional and international dimensions in recent years.

Successive Turkish governments, with all its military forces and armed with the most modern weapons, have tried, for decades, to eliminate the Kurdish people, but to no avail. The war that has just started against the Kurds, which will soon expand under various pretexts, proves this point.

“Turkey is ready to launch a large-scale military operation in northern Syria, and even to annex Manbaj and Raqqa to its areas of influence to prevent the establishment of a Kurdish state.”

Turkey, which has long been the first and foremost supporter of Islamist opposition groups, especially the Al Nusra Front and Daesh, has spared no effort to suppress the Kurds. Kobani is still in memory as Turkey facilitated the entry of Daesh to Kobani for three years and gave it full support to carry out the most terrible massacres against innocent civilians. Following its failure in Kobani, Turkey has started to spread its hatred in Efrin in an attempt to get rid of the Kurds.

The city of Afrin

The Turkish state is trying to implement its plan in the region by deceiving the people of the region. It seeks, through its mercenaries that have been trained in Turkey, to instigate sedition and hostility between the Kurds and the Arabs. It has not yet succeeded in its plan.

For more than a week, the leader of the Turkish Justice and Development Party (AKP), Erdogan, has been on television several times a day, threatening Efrin. Erdogan was not the only one to make these threatening statements, but many of his party’s officials, such as the Defence Minister Nurettin Canikli, PM Benali Yildirim, and Foreign Minister Mevlüt Çavuşoğlu, have made similar statements. These statements were accompanied by artillery bombardment on Efrin and intensive visits and contacts between Turkey, Iran, Russia and the Syrian regime in secret to reach an agreement.

Turkey mobilised the mercenary groups it supports in Idlib, such as the Nour al-Din al-Zenki Movement, Al Nusra Front and Ahrar Al Sham, and forced them into fighting in Efrin to achieve its objectives of occupying Efrin.

Turkey is well-aware that occupying Efrin is not a picnic, and is not like occupying the cities of Al Bab and Jerbalus following an agreement with Daesh. Turkey knows that it will face resistance in Efrin. Therefore, the Turkish state sends these mercenary groups to the frontlines to prevent the flow of dead bodies of Turkish troops into Turkey, which would lead to the escalation of public reactions to Erdogan’s foreign policies.

The People’s Protection Units (YPG), the Women’s Protection Units (YPJ) and all the military formations in Efrin decided to resist any military attack by Turkey or any other militant groups against Efrin and not to bow to pressure from Turkey. Despite the unequal military power between the YPG and the Turkish army, NATO’s second largest military force, the YPG made its decision to defend Efrin and will not surrender. Therefore, the free will and determination will triumph over the massive military arsenal of the Turkish army.

The Turkish state launches attacks on Efrin to undermine the will of the people, which has been achieved thanks to the blood of their martyrs in Rojava and northern Syria. By attacking Efrin, the Turkish state also targets the thousands of displaced people from other parts of Syria, who sought refuge in Efrin. This means that Turkey today is attacking the Syrian people as a whole.

After receiving the Russian green light, Turkey’s warplanes began on 20/01/2018 their air raids on Efrin. The bombings targeted populated areas and so far eight civilians have lost their lives, including a refugee child, Yahya, and 13 other civilians have been injured.

Since Turkey’s declaration of its aggressive war on Efrin, its army and associated mercenary groups have tried to invade Efrin’s territory. All attempts by the attackers have failed. The occupying army and its associated mercenaries attack from the outskirts of Balbala, Raju, Jinderis, Shia and Shara, all of which are located on Turkey’s border.

Following the failure of the Turkish army to penetrate the territory of Efrin, its warplanes began today to intensify the shelling of the densely populated areas, such as the Mobata area and the vicinity of Efrin city, as well as the villages near the Turkish border such as Balbala, Raju, Jinderis, Shia and Shara, causing much destruction and killing many innocent civilians.

The Turkish invaders have committed massacres against civilians and crimes against humanity. The international community has remained silent, despite the great powers’ statements, especially Russia and the US, that the Turkish aggression does not serve the security and stability of the region, as well as the war on Daesh. It has been reported in the media that the Russian and US foreign ministers talked and discussed the Turkish aggression and attack on Efrin. They however did not address the issue in public and did not release any official statements.

Despite the aggressive bombings on Efrin, the people of Efrin remained in the city to confront the Turkish army and its mercenaries. This is what disturbs Turkey, so its media began to spread false news about the displacement of the people of Efrin and the claim that the Ba’athist regime of Syria opened a corridor for the arrival of military reinforcements to Efrin. This Turkish propaganda is aimed to conceal the agreement between the Turkish government and the Syrian regime on the invasion. Efrin’s Public Administration called upon young men and women to join the resistance, and even the elderly took up arms to confront the Turkish occupation.

Committee for Documentation and Preparation of Files

Posted on January 23, 2018, by Internationalist Commune of Rojava