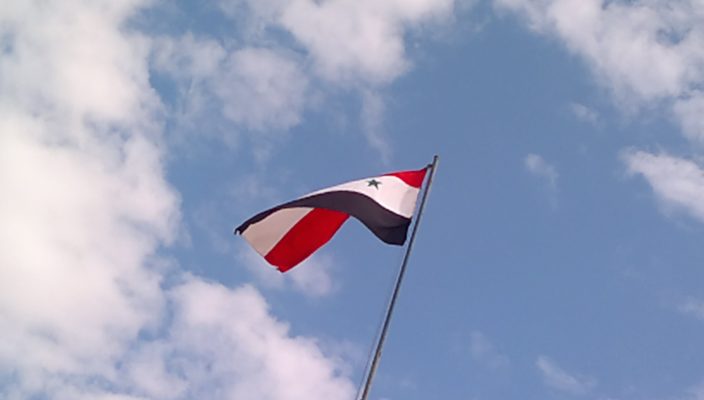 “After more than a month of the legendary resistance of our forces against the Turkish invasion army and the terrorist groups aligned with it from Jabhat al-Nusra, Da’esh and others, and causing severe losses for the invaders in equipment and ammunition, as our units considered to call the Syrian govt and its army to undertake its duties in participating in defending Afrin and protecting the Syrian borders against this evil invasion… The Syrian government has thus heeded the call and responded to the obligation call and sent military units today on 20 Feb 2018, and that is to concentrate on the borders and participate in defending the unity of Syrian lands and its borders,” YPG spokesperson Nouri Mahmoud.

Despite threats from Turkish President Erdoğan and his ministers:

“’If (the Syrian army) comes in to defend the YPG, then nothing and nobody can stop Turkish soldiers,” Turkish Foreign Minister Mevlut Cavusoglu said in Jordan. ‘Turkey would have no issue with Syrian troops entering Afrin if they did so to “cleanse” it of the Kurdish fighters’, he added.” (https://www.reuters.com/article/us-mideast-crisis-syria-afrin/turkey-warns-syrian-army-against-helping-kurdish-ypg-in-afrin-idUSKCN1G30SB)

“President Tayyip Erdoğan later said in a phone call with Russian President Vladimir Putin that Damascus would face consequences if it struck a deal with the YPG and said the Afrin operation would continue, CNN Turk reported.” (https://www.reuters.com/article/us-mideast-crisis-syria-afrin/turkey-warns-syrian-army-against-helping-kurdish-ypg-in-afrin-idUSKCN1G30SB)

Despite also: (and following talks on Monday 19th between President Erdoğan and both Russian President Vladimir Putin and Iranian President Hassan Rouhani about Syria) President Erdoğan and the Turkish media confirming agreement between Turkey, Iran and Russia, (currently the ‘3 contenders for the Syrian Throne’) on the ‘status quo’ where Turkey has been given carte blanche to bombard the region with impunity for the past 31 days…

“Turkey thwarted the possible deployment of Syrian government troops into the northwest Afrin region after talks with Russia’s President Vladimir Putin, and Iran’s President Rouhani, Erdoğan said on Tuesday. Sources from the presidency said that the call with Putin touched on “issues related to forming new observation points” in Idlib, one of the de-escalation zones agreed upon in the Astana process.

Despite reports then that a Syrian convoy had been forced to withdraw due to intense Turkish artillery fire:

“Turkish President Recep Tayyip Erdoğan claimed that Syrian pro-government forces “were forced to turn back” from Afrin after coming under Turkish artillery fire.  Speaking at a press conference, he said that the fighters who entered Afrin were acting alone and warned that Turkey would not allow a “wrongful step” in the future.

‘That file has been closed for now,’ he asserted.'”

“The Syrian government has responded to the call of duty and sent military units on this day … to deploy along the border and take part in defending the unity of Syria’s territory and borders,” YPG spokesman Nouri Mahmoud said in a statement.

Syrian State TV showed about 20 vehicles with heavy weapons mounted entering Afrin from the nearby village of Nubul. Dozens of armed men were on the vehicles waving Syrian flags and chanting pro-government slogans.

The Syrian Observatory for Human Rights:

“Aleppo Province, the Syrian Observatory for Human Rights: Several reliable sources confirmed to the Syrian Observatory for Human Rights that the reports about the withdrawal of the forces of the regime from Afrin and returning to their positions in Aleppo are completely false reports, where the sources confirmed that a column of these forces has arrived to Afrin area, and the forces were deployed in their positions, while another column is still preparing to go to Afrin area, but the column has stopped after shelling by the forces of “Olive Branch” operation on areas of its presence at Al-Ziyara crossing between regime forces’ controlled areas and the area of Afrin.

The Syrian Observatory for Human Rights published during the past few hours that the explosions shook areas in the countryside of Afrin, caused by shelling by the “Olive Branch” Operation Forces who targeted areas in the southeastern countryside of Afrin, and the Syrian Observatory for Human Rights learned the shelling coincided with the entry of the vehicles and machines of regime’s forces to Afrin area, in order to be deployed in accordance with the agreement reached between YPG and the regime forces…

The Syrian Observatory for Human Rights monitored the entry of vehicles loaded with weapons and heavy and medium machine guns, in addition to armored vehicles, carrying tens of soldiers and members, within the implementation of the agreement reached between the regime forces and the Kurdish forces, which allows the regime forces to be deployed in the area of Afrin and the contact lines with “Olive Branch” operation forces.” (http://www.syriahr.com/en/?p=85281)

“Mevlut Cavusoglu, Turkey’s foreign minister, said on Monday his military would hit back if pro-Syrian forces intervened in Afrin to help the YPG.”

In the speech he gave to members of his ruling party (AKP), Turkish President and Chairman of the ruling Justice and Development Party Recep Tayyip Erdoğan also promised that a siege of Afrin would begin soon.

“The siege of the Afrin city centre will start rapidly in the coming days. This way, both outside help to the region and city will be cut off, and the terrorist organisation will not have the means to negotiate with anyone,” he said.