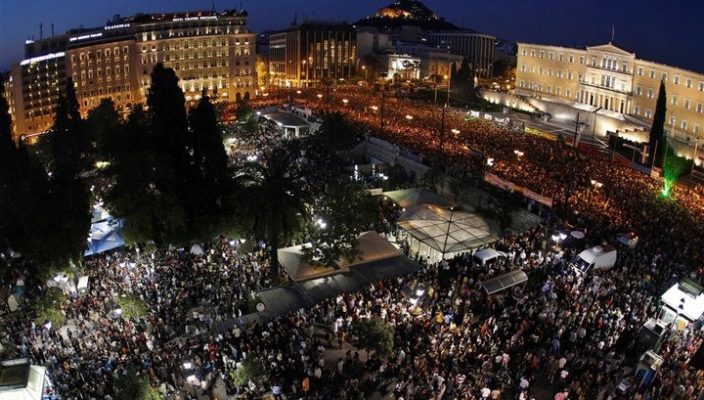 As February comes to an end, DiEM25 voted to approve MeRA25, its electoral wing in Greece

As February comes to an end, DiEM25 voted to approve MeRA25, its electoral wing in Greece. The Greek National Collective (NC) is now preparing the documents that will be needed for the founding of the party: MeRA25 Founding Manifesto; Legal Charter / Political Party Constitution; Code of Comradely Conduct and probably, a conflict-resolution protocol.

Earlier on February 14, Yanis Varoufakis made the formal announcement on his web site, THOUGHTS FOR THE POST-2008 WORLD:

And the name of DiEM25’s Greek political party is…

The new party is expected to participate in the next elections as Greece’s wing of the pan-European DiEM25.

DiEM25 (The Democracy in Europe Movement 2025) is a Pan-European political movement that was launched in 2015 by the former Greek finance minister Yanis Varoufakis and Croatian Philosopher Srećko Horvat.

“Two years ago, we set out to rescue the EU by launching the first pan-European movement to draft policies, campaign, bring awareness and pressure elected officials and institutions to adopt a progressive and humanist agenda for our Union.” (DiEM25)

The objective of the movement is to reform the European Union’s existing institutions to create a “full-fledged democracy with a sovereign Parliament respecting national self-determination and sharing power with national Parliaments, regional assemblies and municipal councils”.

DiEM25 argues “that the moment of organising at the continental level should not be wasted today, since they consider that the model of national parties forming fragile alliances in the European Parliament is obsolete and that (what) is necessary (is) a pan-European movement type, capable of facing the great economic, political and social crisis that Europe is facing. In its analysis, this crisis threatens to disintegrate Europe and has characteristics similar to the Great Depression experienced in the 1930s. To highlight the urgency of democratising Europe before reaching a point of no return, the movement sets the horizon for the year 2025 to draft a democratic constitution that will replace all the European treaties that are in force today.” (Wikimedia)

“We have white smoke! DiEM25’s members overwhelmingly approved the name of our new Greek electoral wing – the political party with which DiEM25 will contest elections in Greece, returning the spirit of the Greek Spring to the place of its birth. As with all major DiEM25 decisions, members voted from across Europe, confirming once again that another Europe is not just possible – but that it is here, within DiEM25! This is the splendid innovation that DiEM25 has ushered into European and national politics, turning European Internationalism into a reality and a European Demos into a tangible possibility.

And the name of our Greek party?

Because Greece is suffocating in a Europe that is deconstructing itself

Because, as long as countries like Greece are suffocating, Europe will be deconstructing itself, thus reinforcing the suffocation of Greece

Only a broad, unifying, pan-european front against our Oligarchy-Without-Borders, that is responsible for Greece’s debt-bondage, can ever give breathing space to Greece and relief to its citizens.

Because the only way of respecting Greece’s Parliamentarianism, Constitution and… common sense is to end the blind obedience to the directives of the troika and its domestic agents…

Authentic Greek Europeanists, today, understand that they have a duty to disobey the incompetent pseudo-technocrats who, on the altar of narrow oligarchic interests, are sacrificing Greece while de-legitimising Europe.

Because ‘mera’ in Greek translates into ‘day’, or ‘diem’ in Latin. And because Greeks have had enough of the long night of debt bondage to which they have been condemned for so many consecutive years.

Until then, we call upon all European democrats who were cheered by the news of MeRA25’s impending birth, and who think this is a beginning worthy of their support, to visit this page (https://internal.diem25.org/en/donations/to/greece) and register their practical support.

Greece Uprising. Image of the Syntagma square garden. 100.000 people gathered at the centre of Athens on Sunday, 29/5/2011. It was the first day of the people’s protest against IMF in european cities.

By Kotsolis at English Wikipedia

Yanis Varoufakis explains to the members why DiEM25 should be enhanced by a political wing to give the Europeans a chance to vote for real change in 2019.