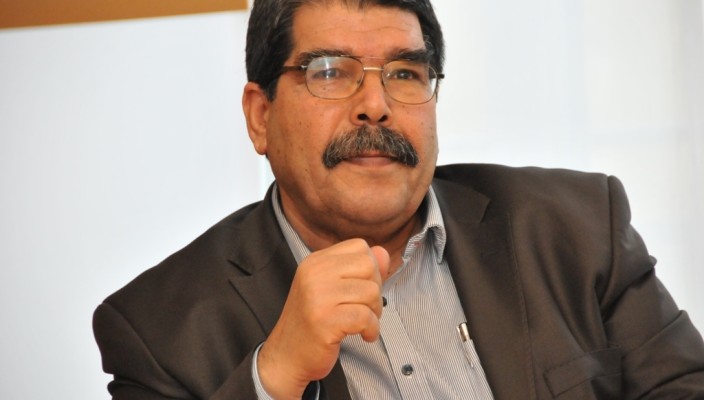 In the light of the great Turkish failure and the policies of the Turkish State in Syria in order to undermine the will of our people in Northern Syria, especially in its immoral war on Afrin and its great defeat in front of the resistance and all peoples’ support there.

Those people defied the killing machine and reached Afrin. They also bet that free people’s will cannot be undermined. Turkey now is moving to other policies that are hostile to our people from another perspective, namely, to go beyond the general norms and the international laws that itself neither recognize nor commit to them, in issuing arrest warrants against national figures of our people. The latest one was issued against Mr. Mohamed Salih Muslem, the former co-chair of the Democratic Union Party (PYD) and now he is the member of the Diplomatic Relations Committee of TEV-DEM.

He was arrested last night in Prague, the capital of the Czech Republic. This act is contrary to the general values and international laws. The Turkish State has no right to prosecute or arrest any person who is not one of her citizen. Mr. Salih Muslem is a Syrian citizen and has a revolutionary history in the struggle and resistance to serve all peoples. Indeed, given a diplomatic role in Europe, he contributed during the attack on Kobani to expose these attacks, show their reality and financiers and the brutality of terrorism to all peoples in the world. This makes his detention today illegal and his arrest as a direct support to all the opposite efforts those that Mr.

Muslim has worked to clarify and expose to the peoples of the world.

We, in the Executive Board of the Democratic Society Movement (TEV-DEM) condemn this illegal incident against the member of the Deplomatic Relation Committee of our Movement and emphasize that what happened in the State of Czech is an immoral act and contrary to the values of international norms, and reflects how  the Turkish MIT members  have the ability to penetrate into the European arena and don’t commit to any laws or even respect for the sovereignty of States. The incident also is a clear violation of the sovereignty and known laws in the State of Czech, in which this country bears responsibility for the arrest.  Arresting Mr. Muslim in conjunction with the issuance of the decision by the Security Council last night to stop military actions in Syria affirms that Turkey seeks and continues its war against our people and does not recognize any resolution or  international law.

We appeal to all civil and law organizations, personalities, countries and the United Nations organizations to express their position on this incident, which it is an another policy that Turkey has followed against our people. We also appeal to all our people at home and abroad to carry out their duties in protesting and denouncing this incident and to carry out their activities without interruption.

In conclusion, we emphasize that we will not accept and allow any action of this kind and we will do our part politically and diplomatically for the releasing Mr. Salih Muslim. We will not allow the Turkish state to continue its policies as well as we asked for the whole world to do their part about these practices and put an end to this policy that makes the world like free of laws and ethics.

Executive Board of the  Democratic Society Movement (TEV-DEM)