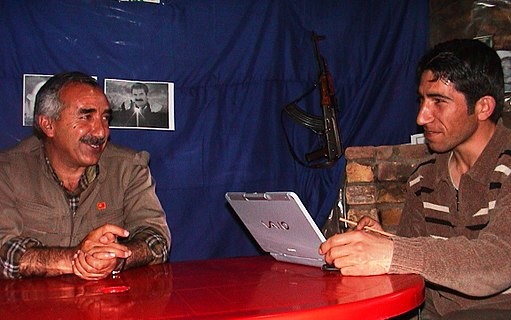 Murat Karayilan, one of the co-founders of the Kurdistan Workers’ Party and its acting leader since Abdullah Öcalan was imprisoned in Turkey

“I say this in their words, there is no ‘terror’ in Afrin. There was peace there. The Turkish army brought in the violence and the terror. If we are to speak of terror, it would be apt to speak about the AKP’s terror. They claim there is a threat against them. A complete lie. This attack is against the people of Afrin and the whole of the Kurdish people.” Murat Karayilan, Kurdistan Workers’ Party (PKK) & the People’s Defence Forces (HPG)

Murat Karayilan, one of the co-founders of the Kurdistan Workers’ Party and its acting leader since Abdullah Öcalan was imprisoned in Turkey 1999. In 2014, he was assigned as the new commander-in-chief of the PKK’s armed wing, the People’s Defence Forces (HPG).

Over the weekend of the 27th January Murat Karayilan gave an interview to Ronahî TV, a Kurdish channel that broadcasts from Syrian Kurdistan and Brussels, “focusing on Kurds around the world especially in Rojava (Syria)”. The interview focused on the Turkish military assault on Rojava in its first seven days.

“When they failed to enter, they turned to saying they should form a secure area on the border. But the people who have waged this historic resistance will not let them in even 1 km from the border, let alone 10. This is their right. Nobody can come and just invade the lands of a people who have shown their heroism on the battlefield.”

A state of mobilization has been declared for Afrin

“So all Arab, Kurdish, Syriac, Armenian youth should join this mobilization. Everybody should turn towards Afrin and go join the resistance. Those who can’t go should develop this resistance wherever they are. After the mobilization declaration, many groups have applied to join the battle on the frontline.”

“Now, beginnings are important. That is true for war as well. For 6 days, looking at the resistance by the SDF, the YPG and the people against the Turkish state’s invasion attacks on Afrin, a clear picture of this war has been painted. There is a great resistance. This is a resistance against the biggest weapons technology of the day. This is something to be proud of in the person of the people and the defense forces of Afrin. It is something to be proud of for the whole of the Kurdish people. The 6 days of the Turkish invasion has achieved no results despite all their terrestrial and aerial technology. This is a very valuable resistance. Not just for the people of Afrin, not even just for the Kurdish people. It is a great thing for all the peoples of the region, and for the forces of democracy. That will have significant results.”

“We know the Turkish state’s strength. I had spoken about this before, they don’t have enough power to create a victory. They use a lot of technology, they brag a lot. But in essence, they are not that strong. Not to underestimate the enemy, that would be wrong, but this army is not an army to conquer every place they ever go to.”

“I say this in their words, there is no ‘terror’ in Afrin. There was peace there. The Turkish army brought the violence and the terror. If we are to speak of terror, it would be apt to speak about the AKP’s terror. They claim there is a threat against them. A complete lie. This attack is against the people of Afrin and the whole of the Kurdish people.”

“He brought his soldiers to the Southern Kurdistan border and said that he must prevent the referendum at all costs, they said the Southern Kurdistan federation administration should step back. Erdoğan himself said if the administration didn’t take a step back he would come suddenly one night. Erdoğan said this, and they insulted the Kurds. They forced the Iraqi state to attack and take Kirkuk. Now they boast that they took Kirkuk from the South and demoralized the Southern people, and their only goal is to take Afrin too so they will ‘put the Kurds in their place’ so they will never have any rights in the South, or Rojava, or the North, or Rojhilat. That is their only purpose. They say they will take Afrin, they will invade, and nobody should speak of a status there. That is the whole of the matter.”

“The resistance by the people of Afrin to date is extremely important and historic. The resistance developed until now is proof that it will be so in the future. I have unlimited faith in this. Our people will derive strength from these 6 days of resistance and develop a greater resistance. This invasion and its attacks are against all of humanity. They are against the will of the Syrian peoples. That is why everybody who wants freedom in Syria, who wants to live free, should support Afrin.”

By Polatcan (Own work) [CC BY-SA 4.0 (https://creativecommons.org/licenses/by-sa/4.0)], via Wikimedia Commons