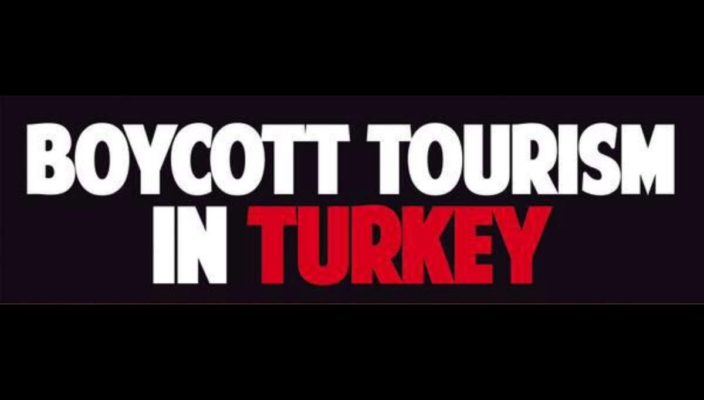 The umbrella organization of the Kurdish freedom movement called for a boycott of Turkish goods and tourism in Turkey to deal a blow against the economy of Turkey, which is the engine of the war against the Kurds

“…A longer description was offered in a study of TESEV (Türkiye Ekonomik ve Sosyal Etüdler Vakfı, Turkish Foundation of Economic and Social Studies) written by Cengiz Çandar under the title “Leaving the mountain”: How may the PKK lay down arms? and the subtitle: “Freeing the Kurdish Question from violence”. Starting on page 83 the paper states:

‘Although the Turkish media widely identified the KCK as the “PKK’s urban organization” and continues to do so, this is not exactly what the KCK stands for. The KCK is the acronym for the Koma Civakên Kurdistan, meaning the Union of Kurdistan Communities. The KCK was established through the reorganization of the PKK within the framework of the principle of “democratic confederalism” suggested by Abdullah Öcalan in his 2004 book “Bir Halkı Savunmak” [Defending A Nation]. The concept was suggested as an alternative to the nation-state and as a model to solve the problems in the Middle East. In this framework, the KCK is like an executive organ coordinating the PKK and all the parties and organizations operating in the other Kurdish regions as an extension of the PKK.'”

For a boycott of Turkish goods and tourism: Statement, 2 March, 2018

“The fascist AKP-MHP-Ergenekon Alliance is conducting a genocidal war in Kurdistan. To finance this war, the fascist alliance is spending a great deal of money. These expenditures are financed from two main sources.

The first economic pillar of the fascist war is production in industry and commerce, which covers domestic demand and exports abroad. This economic base is in the hands of a handful of Turkish elites who have entered into a fateful communion with the fascist regime to earn big profits in the war.

The second pillar is the neoliberal plundering of social and government resources to attract international capital and foreign investment.

The goods produced in Turkey are mostly sold in all parts of Kurdistan. The Turkish state finances the war against the Kurds with the revenues and profits that it earns through its goods consumed in Kurdistan. Especially in the textile and food industry, most goods are sold in Kurdistan. With this income, weapons and ammunition from other states are purchased, which are then used against Kurdish children, women and young people. The exploitation and cheap purchase of the natural resources of Kurdistan, especially in Southern Kurdistan, plays a central role in the financing of war.

In short, the anti-Kurdish war yesterday in Sur, Cîzre, Nusaybin, Şırnak, Shengal, Kirkuk and Kobanê, and today in Afrin, and the weapons and ammunition used are paid for with money spent by the Kurds and the Resources of Kurdistan.”

For a boycott of the Turkish Economy

“Undoubtedly, our people in all four parts of Kurdistan and wherever they are, engage in a strong struggle against the fascist Turkish regime. In the field of self-defense, the regime is suffering major setbacks. At international level and in the field of civil society, too, public awareness has been achieved.

However, there is an area as well as a sensitive point for the Turkish state that provides its power for the war. Unfortunately, we are not organized in this area and have no means of action to confront the regime. The economy is the area that finances the anti-Kurdish and genocidal war of the regime. The economy plays a fundamental role in this dirty war like the engine of a vehicle. With a weakened economy, it will not be easy for the regime to continue its war, for economy is its driving force.

Therefore, attacks that consciously serve the weakening of the economy will lead to strategic results in this war.

The biggest blow to be dealt to the war economy, is the boycott of all goods produced by the colonialist Turkish regime and companies, mainly in the sectors of industry, food, construction and textiles. The boycott of every single Turkish commodity, especially by the Kurds and in Kurdistan, will weaken the war economy of Turkey. Such an organizational orientation and boycott actions could bring down the already shaky Turkish economy through a chain reaction. The avoidance of Turkish banks and credit institutions as well as a refusal to negotiate trade partnerships with Turkish companies will produce similar results. The boycott should not only be limited to Turkish companies and the Turkish state, but should also include the products of their partner companies. As soon as the foreign companies realize that they are suffering from business relations with Turkish companies and the Turkish state, they will reconsider their business.”

Not only the Kurds and their neighboring peoples but also all democratic and progressive European friends of the Kurds should participate in the boycott. This is of great importance, as the Erdoğan government, through its relations with the IS, al-Nusra and al-Qaeda or other Salafist groups, is responsible for not only the massacres in the Middle East, but also numerous attacks and massacres in European cities. For this reason, all those who participate in the boycott will not only target those gangs who commit crimes against humanity, but also defend humanity through the boycott.

It is very important that the tourism boycott be effective and broad, because Turkey pays a large part of the expenses of the fascist war with tourism revenues. It is extremely important to consider this area as a meaningful specific battle.

The Kurdish people and their friends have the opportunity, through the boycott of Turkish goods and tourism in Turkey, to deal a severe blow to the financing of war. There are millions of people in question, who can inflict heavy losses on the war economy of the fascist regime. It depends on every single purchase. If the actions are coordinated and organized both in Kurdistan and abroad, they will have great efficiency.

In this sense and for the reasons set out, we as KCK call on people in all parts of Kurdistan, neighboring peoples and friends of the Kurdish people abroad to boycott consumer goods from Turkey and not to go on holiday in Turkey. We invite our people and our friends to organize a corresponding boycott and actions in this regard.”