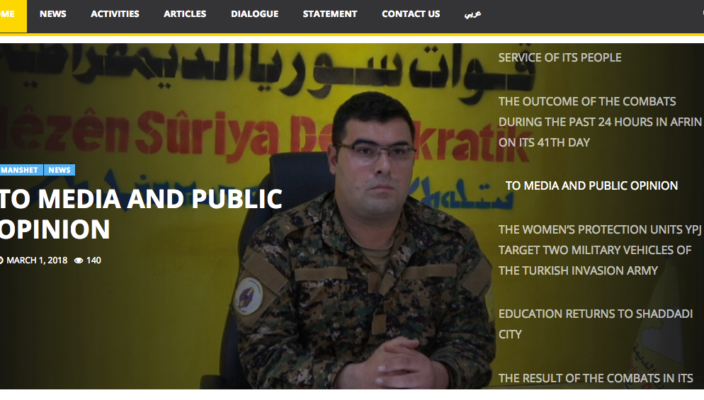 The Syrian Democratic Forces (SDF) are the official defense force of the Democratic Federation of Northern Syria – Rojava. They released their first statement on UN Resolution 2401 (2018) on the “30-day Cessation of Hostilities in Syria” on February 24.

“According to UN security council resolution / 2401 / on February, 24, 2018, which clearly provides for a cessation of hostilities on all Syrian territory including Afrin city for a month to facilitate humanitarian access, we in the People’s Protection Units (YPG) declare our welcome and our readiness to comply with the UN Security Council resolution to stop hostilities between all enemies, except ISIS terrorists, while reserving the right to retaliate which is a legitimate right of self-defense in case of any aggression by the Turkish army and allied factions in Afrin.

Our units also undertake to secure and facilitate the entry of United Nations’ delegations and humanitarian organisations to areas of our control in Afrin facilitate the arrival of humanitarian and medical assistance and to address emergency health cases caused by the targeting of the residential centers and vital installations by the Turkish army and its allied extremist forces.

We in the People’s Protection Units, call upon all the conflicting sides on Syrian land to abide by the cease-fire decision of the UN Security Council and to follow us in supporting and implementing the decision.”

Following a number of days of sustained attacks by the Turkish military and its paramilitary units, spokesperson for the Syrian Democratic Forces, Kino Gabriel delivered the following:

“The UN Security Council unanimously adopted its resolution 2401 at its meeting on Saturday, February 24th 2018, on the basis of a draft submitted by the State of Kuwait and the Kingdom of Sweden, which explicitly provided for the cessation of all combat operations by all parties on all Syrian territory for at least one month.

The Turkish state and its allied extremist factions strike at the international will and the UN Security Council resolution, they are brutally continuing their aggression by directly bombing the civilian populated city of Afrin and its towns and villages, and bombarding vital facilities, including drinking water stations and pumps.

Our forces in Afrin welcomed the UN Security Council resolution and declared its full commitment on February 25th through an official statement and confirmed that its combat operations would be confined to self-defense only against any attack.

The claims made by the Turkish state that Afrin is not included by the international resolution is only an attempt to turn the truth that Afrin is part of Syrian territory. This clearly reveals Turkish ambitions to cut off parts of the Syrian territory in a colonial operation under fake claims and futile pretext.”

To media and public opinion

To the Media and Public Opinion