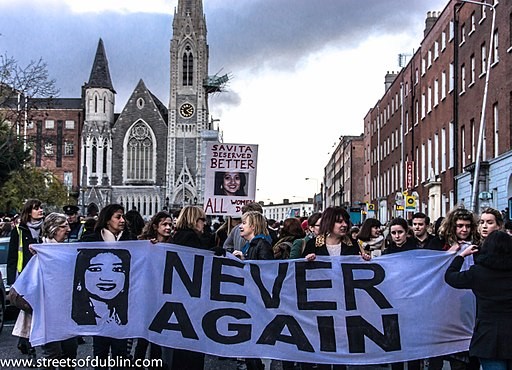 Many of the civil liberties enjoyed elsewhere in Europe (contraception, divorce, abortion) were, for a long time, denied in Ireland, largely on the grounds of the Roman Catholic faith

Ireland went to the polls on Friday, 25th May to decide the future of abortion rights in Ireland.

Abortion has been a crime in  Ireland since 1861 and following a conservative Roman Catholic ethos in the new Irish State at the start of the last century, many of the civil liberties enjoyed elsewhere in Europe (contraception, divorce, abortion) were, for a long time, denied in Ireland, largely on the grounds of the Roman Catholic faith.

In 1983 the Eighth Amendment of the Constitution of Ireland:

Since then criticism of the implications involved had been growing, as the 1983 constitutional amendment guaranteed the unborn the right to life, “making abortion illegal unless the pregnancy is life-threatening”.

“The amendment has wreaked pain on countless Irish lives. The tragic, avoidable death of Savita Halappanavar in 2012 became the rallying cry for reform: denied an abortion when she began to miscarry, she died of sepsis in hospital a week later. Over the years there have been many more cases that illustrate the costs of religious fundamentalism trumping compassion and common sense, such as the case of a suicidal 14-year-old girl who became pregnant as a result of rape, and whom the Irish courts tried to prevent accessing an abortion abroad.” The Guardian

Friday’s vote on The Thirty-sixth Amendment of the Constitution Bill 2018 (bill no. 29 of 2018) – better known as the Repeal of the Eight Amendment – was for an amendment to the constitution of Ireland which would permit the Oireachtas (parliament) to legislate for abortion.

The turn-out for the vote was considered high at 64.5% of the electorate, apparently following a surge in young voters as well as a strong campaign by women’s groups.

Despite a similarly active campaign by conservative and religious groups every constituency in Ireland, with the exception of Donegal, voted strongly to repeal the 8th amendment. The final result being 66.4 per cent for YES to repeal to 33.6 per cent to maintain the status quo.

The parents of Savita Halappanavar  who died tragically in October 2012 told the Irish Times that they were  “really, really happy”.

“Her father Andanappa Yalagi, speaking from the family home in Belgaum, Karnataka in south west India, asked that the legislation to give effect to the referendum result be named ‘Savita’s law’:

“We are really, really happy. We have one last request, that the new law, that it is called ‘Savita’s law’. It should be named for her.”

Today (2012) a large number of protesters took to the streets of Dublin in response to the unfortunate death of an Indian woman who was refused an abortion. The 31-year-old woman died following a miscarriage at University Hospital Galway.

By William Murphy from Dublin, Ireland

Home to vote: Ireland’s exiles return to cast their vote