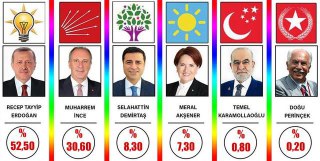 First comments after the elections in Turkey

HDP co-chairs, Pervin Buldan and Sezai Temelli, made a joint statement on the results of the 24 June Presidential and Parliamentary elections.

“We will explain the violations of the election to the public with a specific report on the them”, they said in the statement.

The written statement was read by HDP co-chair Pervin Buldan. Noting that the election results have not yet been officially finalized, despite being early morning Buldan said:

Buldan said – are not trustable and are manipulated. The Supreme Elections Board (YSK) have not yet completed the count. Our objections have not been answered to. Our officers are following operation to clarify the results. We struggle to uncover the violations one by one.”

The statement added: “Our presidential candidate, Selahattin Demirtaş, has ended in third place despite all the black propaganda against him, despite the unequal and unfair conditions of an election campaign he has been running from prison. This result shows once again that he has the love and trust of the people.

The real consensus for Selahattin Demirtaş will be higher as results are not final. Even with these manipulated results, it has been revealed that there is an urgent task to be done: immediately end the detention of Selahattin Demirtaş.

These elections were contested in an unfair and unequal environment, under State of Emergency (OHAL).  AKP President, Erdogan and all his people have used all the State facilities in the most tricky way in order to leave the HDP under the threshold, and thus leaving it outside the parliament, in effect eliminating democratic politics.

A very heavy embargo has been imposed on the media, basically canceling the voice of HDP and forcing the party to bring its proposals to people door by door. There have been pressures and difficulties in the election work.

Despite all this, the HDP has overcome the threshold. The HDP has become the third party in terms of both votes and parliamentary seats. But our votes are still increasing.  As a result of all the violations, we have been stolen votes time and time again. We will expose this.

The election results has also showed once again that the people of Turkey doesn’t want a parliamentary regime, without the HDP and showed that they believe in democracy and justice.

There is no peace without HDP, no democracy, no new life, no pluralism.

HDP voters also expressed a clear support to a strong parliament, a strong local democracy, the rule of law, the independence and impartiality of the judiciary, and a country without State of Emergency. The HDP will continue to struggle with determination to respond to the messages of those who voted for us.

In the light of these assessment, we will do what is necessary to uncover the real results with our friends waiting at the polling stations, with our citizens standing up for democracy, and our voters, and we are making this call on all democracy forces.

From now on we will evaluate the results as they are being unveiled by our election workers. We will disclose the election violations to the public with a specific report on them. We will determine how we will shape our policies for the times awaiting us.

It is very clear that we have a duty to increase the struggle for democracy in Turkey, peace, justice, equality and freedom  in the coming period, it is up to us to struggle to democratize the republic.

We are determined to continue the struggle to fulfill this task with all our provincial and district organizations, our members, our friends, our democracy forces, our constituency and our alliance forces, our citizens with conscience and the democratic people.”

CHP Ince: this election was the most unfair ever

Ince added that “from now on, the regime settling into power is a threat for all of us” and underlined that there was blood in this election.

The CHP candidate underlined that Erdogan fell very much short of the 30 million votes he had targeted [he got 15 million]. “Today, the AK Party must be treated as the general president”, he said.

Ince emphasized that this is an election that will deeply affect the future of the country and democracy and reminds that HDP supporters were massacred in Suruç. “It was an unfair election from the day it was called this the results were disclosed”, he said.

Ince added that “indeed this was an election turned into a referendum, where you had to say yes or no. This was shaped as an elections between alliances and the voting process was affected by the regime.”

Underlining that this “regime is dangerous for all of us”, Ince ended his remarks by saying that “we will continue to be in a big danger. We will live it. We will pay all together its cost. Turkey has severed ties with democratic values.”