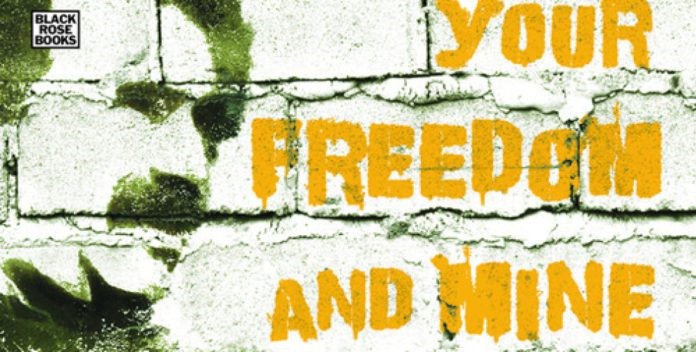 BOOK. ‘Your Freedom and Mine: Abdullah Öcalan and the Kurdish Question in Erdoğan’s Turkey’

Black Rose Books recently marked the release of ‘Your Freedom and Mine: Abdullah Öcalan and the Kurdish Question in Erdoğan’s Turkey’

July 2018: Black Rose Books, along with the Peace in Kurdistan Campaign, the Kurdistan National Congress UK, Kurdish People’s Assembly in Britain, and the Freedom for Ocalan Campaign recently marked the release of ‘Your Freedom and Mine: Abdullah Öcalan and the Kurdish Question in Erdoğan’s Turkey’ at the School of Oriental and African Studies in Russell Square in London. The book had been released on March 21st 2018, during the Kurdish Newroz and just following the entry of the Turkish military and its Jihadist allies into Afrin city in the Democratic Federation of Northern Syria.

‘Your Freedom and Mine: Abdullah Öcalan and the Kurdish Question in Erdoğan’s Turkey’

The title comes from a letter Nelson Mandela wrote when he was imprisoned on Robben Island:

“Only free men can negotiate. Prisoners cannot enter into contracts… I cannot and will not give any undertaking at a time when I and you, the people, are not free. Your freedom and mine cannot be separated.” — Nelson Mandela, letter during his imprisonment, 10 February 1985 (Black Rose Books)

– is the work of 25 contributors (“including politicians, academics, journalists, Iceland’s former minister of justice, veteran war correspondent Jonathan Steele, and key leaders inside the movement…”)

As one more response to the incredible isolation, as well as an addition to current analysis of the difficult situation, of the largest ethnic minority without a homeland, the Kurds, (here those in Turkey / Northern Kurdistan), the book offers “an informative historical overview of the Kurdish Question, leading up until the optimistic opening—and eventual bitter failure—of the peace process in Turkey.”

Also included are official documents and reports from the Imrali Delegations in Istanbul and Diyarbakir/Amed, “which involved in-depth interviews with Kurdish and Turkish politicians, media, and civil society regarding the degenerating political and human rights situation.”

The final section is a collection of testimonials from delegation participants.

“A revolutionary imprisoned on an island fortress may hold the key to peace in the Middle East. From the confines of his Turkish prison cell, Abdullah Öcalan, the leader of the Kurdish Freedom Movement, has proposed a political solution to the interminable Turkish-Kurdish conflict, leading many to describe him as the ‘Kurdish Mandela’. His ideas on direct democracy and women’s liberation have even inspired the Rojava Revolution in northern Syria.

As Syria exploded in civil war and Turkey descended into tyranny, an international peace delegation of European luminaries led by Mandela’s lawyer twice attempted to meet with Öcalan at his prison on İmralı Island. This book is the fruit of these momentous delegations.

Your Freedom and Mine offers crucial insight into the dramatic history, reality, and prospects of the Kurdish Question in Turkey by combining historical survey, human rights reports, interviews, personal accounts, geopolitical analysis, and political philosophy.”

Part One: The Historical Context of the Conflict

Thomas Jeffrey Miley, with Guney Yıldız: A History of the Conflict between the Turkish State and the Kurdish Freedom Movement

Adem Uzun: Living Freedom: The Evolution of the Turkish-Kurdish Conflict and Efforts to Resolve It

Havin Guneser: Abdullah Öcalan: A Life of Four Decades of Struggle and Resistance and 16 Years on an Island Prison

Kariane Westrheim: My Encounter with the Kurdish Movement

Michael Gunter and Kariane Westrheim: Notes on the History, Goals and Challenges of the EU-Turkey Civic Commission (EUTCC)

Estella Schmid: The Work of the Peace in Kurdistan Campaign (UK) and the Kurdish National Congress (KNK)

Interview with Simon Dubbins: The Freedom for Öcalan Campaign and the British Trade Union Movement

Thomas Jeffrey Miley: The Plight of the Kurds in Turkey and the Fate of the Middle East

Jonathan Steele Reports from the Third İmralı Delegation: Turkey and the Kurds: A Chance for Peace?

Thomas Jeffrey Miley: The Council of Europe and the Death of the Peace Process in Turkey: Report from the Fourth EUTCC İmralı Delegation (Strasbourg, France; April 25-27, 2017)

Janet Biehl: Fighting the Lion Inside the Cage

Radha D’Souza: My Tryst with the Kurdish Freedom Struggle

Ögmundur Jónasson: An Exercise in Understanding

Federico Venturini: An Activist-Researcher as a Peace Delegate

Julie Ward: The Experience of a European Politician Who Knew Nothing

Mohammed Elnaiem: Struggling with the Kurdish Freedom Movement: Dispatches from a Black Radical on the Long March for the Freedom of Abdullah Öcalan

Thomas Jeffrey Miley: The Perils and Promises of Self-Determination

Part Six: Democratic Confederalism and the Scramble for the Middle East

Thomas Jeffrey Miley: The War on Terror, the Refugee Crisis and the Crisis of Europe

Selections from the Panel Discussion: “Consolidating Peace, Democracy and Human Rights after Raqqa: Prospects for the Region and the Kurds” (14th Annual EUTCC Conference; December 2017)

Abdullah Öcalan is one of the founding members of the Kurdistan Workers’ Party. The Kurdistan Workers’ Party, the PKK (Kurdish: Partiya Karkerên Kurdistanê‎) was founded on 27 November 1978 in the village of Fis (near Lice, Diyarbakir Province) in south-eastern Turkey – Northern Kurdistan, by a group of Kurdish students led by Öcalan who had spent the preceding years organising for Kurdish rights and suffering violent attacks by Turkish state organisations including the Turkish military, the Grey Wolves, (a rightwing nationalist group linked to the MH Party) and also some of the Kurdish landowners who viewed the group as a threat.  By 1984 the organisation was at war with the Turkish state. The PKK quite early on adopted a Marxist-Leninist framework which has developed significantly over the years and now has been completely revised since Abdullah Öcalan’s arrest in Kenyatta airport in 1999. Öcalan was arrested that year by the Turkish National Intelligence Agency (MIT) with the support of the CIA in Nairobi and taken to Turkey, where he was sentenced to death under Article 125 of the Turkish Penal Code. The sentence was commuted to aggravated life imprisonment. Since that time he has been imprisoned in the maximum-security prison on İmrali island, in the Sea of Marmara, where for a number of years now he has been arguing (when allowed to communicate by the Turkish authorities) for an end to violence and a political solution to the ‘Kurdish Question’. From his prison cell, Öcalan has studied and produced over 40 books, addressing the Kurdish struggle for freedom and his significant work on “Democratic Confederalism”,  based largely on the thinking of the American political philosopher Murray Bookchin, (January 14, 1921 – July 30, 2006) which has had a significant impact within the Kurdish liberation movement and in the remarkable achievement of the liberated zones in Northern Syria, Rojava, where the theory is currently being put into practice despite enormous dangers.

“Your Freedom and Mine offers crucial insight into the dramatic history and current reality of the Kurdish struggle for recognition and peace in Turkey.” (University of Chicago Press Books)

“Shocking revelations make this an emotionally powerful book. It is an objective, extremely well-documented analytical report of Turkish state terrorism against Kurds. Barbaric inhuman policies, massacres, crimes against humanity and genocide continue to this day. Despite the tens of thousands jailed, tortured, and killed, the courageous Kurdish resistance grows, and their pursuit of peaceful democratic solutions continues. What does the rest of the world do? Nothing, apart from selling military hardware to the Turkish military.” (Ajans Firat)

“We want the book to make as big an impact as possible, not only to sell copies of the book, but also to raise the issues of the Kurdish Question, to discuss the proposals of Ocälan and the Kurdish Freedom Movement for genuine peace, and to discuss what we as the international community can do in solidarity. Our aim it is reach out with the book in order to have a political impact for a peaceful resolution of the Kurdish question.”

You can purchase your copy online here.

You can also download the following titles by Abdullah Öcalan in PDF format – for free:

Abdullah Öcalan, The Road Map to Democratisation in Turkey, and Solution to the Kurdish Question, published by the International Initiative “Freedom for Abdullah Ocalan – Peace in Kurdistan” (2011) (download PDF here).

Also take a look at the essays:

Other Books: by Abdullah Öcalan (Bibliography)

“The right of self ­determination of the peoples includes the right to a state of their own. However, the foundation of a state does not increase the freedom of a people. The system of the United Nations that is based on nation­ states has remained inefficient. Meanwhile, nation­ states have become serious obstacles for any social development. Democratic confederalism is the contrasting paradigm of the oppressed people. Democratic confederalism is a non­state social paradigm. It is not controlled by a state. At the same time, democratic confederalism is the cultural organizational blueprint of a democratic nation. Democratic confederalism is based on grass­roots participation. Its decision­ making processes lie with the communities. Higher levels only serve the coordination and implementation of the will of the communities that send their delegates to the general assemblies. For limited space of time they are both mouthpiece and executive institution. However, the basic power of decision rests with the local grass­roots institutions.”