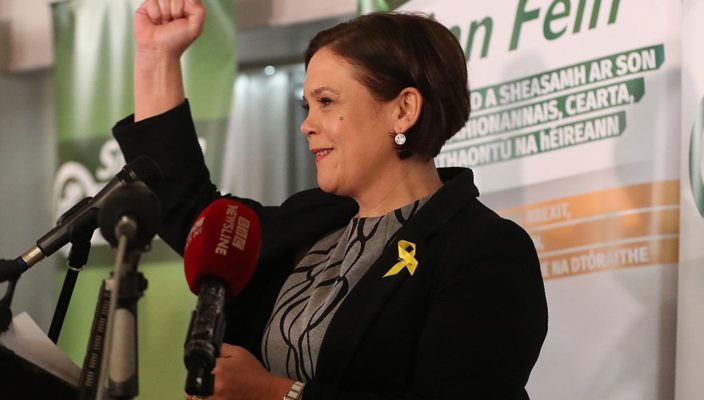 Sinn Fein has confirmed it will present a candidate to challenge current Irish President, Michael D Higgins, in the upcoming Irish presidential election.

Sinn Fein has yet to name a candidate for the vote, which is expected to take place in November.

Party leader Mary Lou McDonald said a candidate would be put forward following the announcement that President Higgins would stand for re-election for a second term.

She said the party would campaign with the aim of sparking conversation about “building a new, agreed and united Ireland”.

In 2011, the party ran the late Martin McGuinness as a candidate, winning 13.7 percent of the vote.

Former Galway TD Michael D Higgins became the thirteen president to be elected to Aras an Uachtaran, with 39.6 percent.

Mr Higgins is favourite in all opinion polls to win reelection.

Fianna Fail or Fine Gael have said they will not contest against the Labour Party veteran, a decision which leaves the field open for Sinn Fein to gain maximum publicity.

McDonald said: “Ireland and the world have changed in the seven years since we last had a presidential election. A new generation has become politically engaged and have been central to changing Ireland for the better as we saw in the marriage equality referendum and in the [abortion] referendum to remove the Eighth Amendment.”

In those referenda, young people voted in unprecedented numbers.

“It is right – added McDonald – that we give this generation the opportunity to be part of a wider conversation about what a better Ireland should look like.”

Speculations have already begun as to who could be the Sinn Fein candidate at the Presidency of the Irish Republic. Among the names are Belfast lawyer John Finucane, Fermanagh-South Tyrone MP Michelle Gildernew, Cork-based MP Liadh Ni Riada and Dublin TD Eoin O Broin.

“We believe that there is an appetite for political and social change”, said McDonald, adding: “We are entering this race because we want to bring our vision for the future of all of Ireland to the people. We will seek during the campaign to have a progressive conversation about building a new, agreed and United Ireland. And we will ask the people to endorse that vision for the future.”