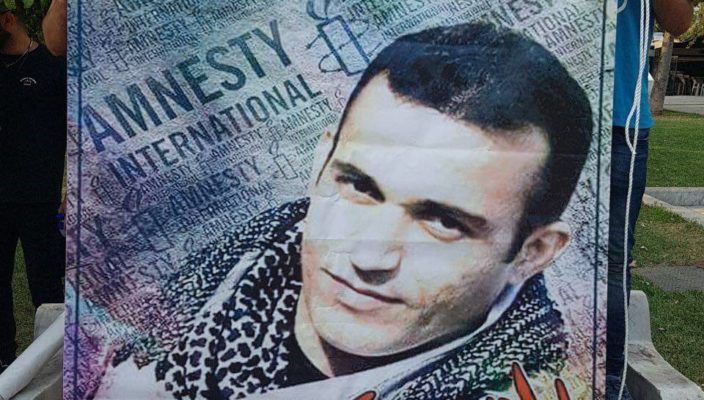 Ramin Hossein Panahi, a Kurdish activist, was sentenced to death in January 2018 by the Iranian regime

Ramin Hossein Panahi, a Kurdish activist, was sentenced to death in January 2018 by the Iranian regime, accused of links to the Kurdish political party Komala and continues to be held in the Central Prison of Sanandajthe.

Since Ramadan ended on Friday 15th June, his family have been waiting, each day, for news of his execution. An unimaginable vigil for any family to contemplate, let alone continue to endure…

Now, over a month later, there has been no sign of the Iranian justice system relenting in its decision, despite serious international concern over the treatment of the activist in custody, the fairness of his trial, nor the grounds on which the death sentence was passed.

Now NRT News, the Kurdish news agency based in Sulaimaniya, Iraqi Kurdistan, has announced that another three Kurds have been executed “at a prison in Urmia on Monday” (July 23)…

The report  of the executions came from Hengaw Human Rights News.

The three Kurds executed were, Kamal Sultani from Bukan and Faruq Daryayee and Mahmoud Hamzada from Shino (Oshnaviah). They were reportedly executed in the Urmia Central Prison at the beginning of the week.

At the same time news regarding Ramin Hossein Panahi, was also released by the human rights body; yet instead of the expected or hoped for announcement of the  commutation of his death sentence (if not a whole retrial on the charges he is accused of):

“Hengaw reported on Friday that Iranian authorities planned to transfer Kurdish political prisoner Ramin Hossein Panahi to a prison in Karaj for execution. Panahi’s transfer to Karaj signals that his execution will likely take place there, the human rights news organization reported.”

“Ramin Hussein Panahi was arrested by the Iranian security forces in the summer of 2017. Mr. Hussein Panahi has, since his arrest, only appeared in one court hearing in Sna. In this one court hearing, Judge Sa’idi sentenced him to death by hanging for alleged activities against Iran’s national security and membership in Komala, a Kurdish opposition party to the Iran regime.

Ramin Hussein Panahi has since denied all charges and allegations brought against him including alleged participation in the armed conflicts and activities. Mr. Hussein Panahi’s lawyer has called the sentence unexpected and unjust.”

Protests continue across the world to encourage the Iranian regime to show mercy as well as investigate serious concerns pointed out by a number of local and international human rights agencies concerned at the standards of justice  meted out to the Kurdish activist.

It is thought that these widespread protests earlier resulted in the delay of his death sentence being carried out. If so, widespread opinion across the world in support of  Ramin Hossein Panahi is encouraging the Iranian regime from taking the life of an innocent man if the evidence put forward by his lawyers as well as the United Nations Office of the High Commissioner for Human Rights, who said only recently in June:

“The UN experts said there were many legal concerns about the handling of the case, including reports that Mr. Panahi had been tortured, denied access to a lawyer or medical care, and that he had been held incommunicado.

The experts also stressed their concern that the charges against Mr. Panahi did not meet international standards, which specify that the death penalty must be limited to cases of intentional killing.”

How long this delay can last, serious doubts now exist.

And in doing so, show compassion for a family to whom each day must be a living hell as well as demonstrating a commitment to the rule of law and the integrity of the justice system…

…in the eyes of a world, now watching…and waiting.