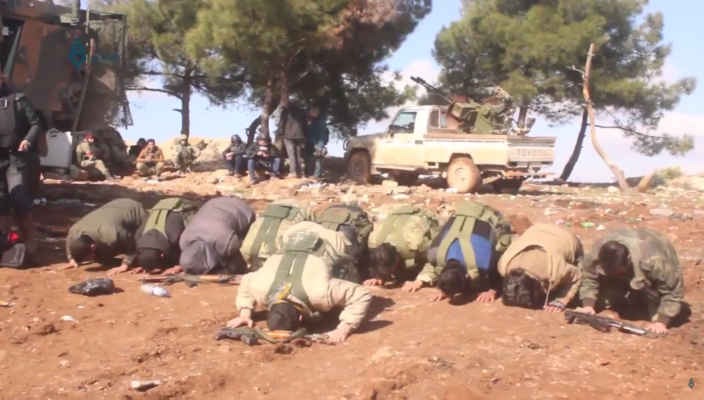 While Turkey’s economy heads into stormy waters and its relationship with its major NATO ally, the US, deteriorates, all securing headlines in the mainstream media, details of murder, looting, torture and kidnapping in occupied Afrin, sadly get little attention.

Yet, so many months now after its forcible seizure, reports continue to leak out of the brutality ongoing in this previously autonomous region of northern Syria. Apparently crimes against human beings do not weigh enough on the scales of international justice (or in the sale of newspapers or media advertising) as the shipwreck of the Turkish lira or an exchange of words between two powerful bullies in the (international) school playground?

That said and despite Turkish reports of “mission accomplished” in Rojava / The Democratic Federation of Northern Syria following the raising of the Turkish flag in Afrin town centre (as well as the destruction of Kawa the Blacksmith) on 18th March last, after a brutal 58-day bombardment of the poorly armed region followed by invasion by NATO’s second largest military force (after the U.S., that is, “with an estimated strength in 2015 of 639,551 military, civilian and paramilitary personnel”) along with thousands of Jihadist mercenaries of the (Turkish) Free Syrian Army…

…and despite the appalling conditions suffered by 134,000 Afrin civilians turned refugees forced to flee the murderous campaign and now in refugee camps with little amenities and even less international support…

…and despite the relatively profound silence from Turkey’s “allies” in the face of its so-called ‘victory’, (a silence only matched by Turkey’s own extensive propaganda), remarkably, in a region of Syria that survived relatively unscathed from seven years of bloody civil war…

“Syria: Turkey must stop serious violations by allied groups and its own forces in Afrin”

The Thursday August 2 Amnesty report only brings attention to what Kurdish sources have been telling us since the Turkish flag began flying in the predominantly Kurdish enclave and what is now becoming increasingly difficult to ignore.

Amnesty’s research was undertaken between May and July 2018 with interviews of 32 people, “some of whom were still living in Afrin and others who had fled to other countries or different areas of Syria”.

It is a welcome recognition of the ongoing human rights abuses being perpetrated  openly and in flagrant disregard for international norms and standards – perpetrated, you might think, with the same arrogant contempt for human rights that the Turkish AKP regime of Recep Tayyip Erdoğan has grown used to in Turkey itself – with no force, at present capable of encouraging the regime in a more humane or democratic direction.

As in the other reports filtering from the besieged region, Amnesty’s research confirmed ongoing violations of the remaining civilians in Afrin which included: “arbitrary detentions, enforced disappearances, and confiscation of property and looting to which Turkey’s armed forces have turned a blind eye”.

Along with the allegations of ethnic cleansing and the seizing of civilians homes to house its paramilitary fighters, Amnesty adds the seizure of local schools to serve as bases for the jihadist groups occupying the region with the Turkish army.

“Turkey’s military offensive and occupation have exacerbated the suffering of Afrin residents, who have already endured years of bloody conflict. We heard appalling stories of people being detained, tortured or forcibly disappeared by Syrian armed groups, who continue to wreak havoc on civilians, unchecked by Turkish forces…”

Confiscation of property, homes, and shops

Accusation of Affiliation to Kurdish groups

“Amnesty International interviewed several residents and internally displaced people who reported that armed groups had arbitrarily detained civilians for ransom, as punishment for asking to reclaim their property, or on baseless accusations of affiliation to the PYD or YPG. Local sources told Amnesty International of at least 86 instances of arbitrary detention, torture and enforced disappearance.”

Again, ongoing if not persistent reports from the Kurdish media have been calling attention to this since the arrival of the Turkish military in March.

The Syrian Observatory of Human Rights

… also pointed out that as many as 1,000 people have been detained by various rebel groups since they completed their takeover of the Kurdish-majority territory.

“The Syrian Observatory for Human Rights published on the 30th of July 2018… complaints from the people about the daily harassment they are living, with continuous violations against them, where residents confirmed… that the Turkish forces and opposition factions continue their abductions of Syrian civilians in Afrin area; under the pretext of being connected to the Kurdish Forces and the Democratic Union Party, where they are being taken to headquarters in Afrin area where they are investigated, tortured, and insulted, and the number of abductees have reached about 1000 people…

…where more than half of them have been released after paying bribes and ransom to the factions that arrested them, while the Turkish forces and the factions refrained from releasing the rest of them except after paying money by their relatives…”

“Ten people told Amnesty International that Syrian armed groups had confiscated properties and shops in Afrin. Displaced residents said they were informed by their relatives and neighbours that their homes were either being used by the pro-Turkey armed groups as military headquarters, or occupied by displaced families from Eastern Ghouta and Homs.

One teacher displaced in a camp in the al-Shahba region told Amnesty International that his house in Jenderes had been confiscated by Faylaq al-Sham. He said: ‘My neighbour told me that my home was confiscated. He sent me images that clearly show the name of Faylaq al-Sham written on the wall of the entrance door.’”

A practice which appears to be widespread through the occupied region and obviously seen as normal by the occupying groups, including the Turkish army.

Looting of homes and businesses

Despite Turkey’s claims that reports of looting early in the occupation had been dealt with, Amnesty found that not alone was this not the case but instead looting appeared to be a normal aspect to the (T)FSA presence:

One person who returned to Afrin in May told Amnesty International:

“I went to my parents’ home and it was empty. They stole every piece of furniture, appliances, and everything else. The neighbours saw the Free Syrian Army packing all the furniture in trucks. There are at least four armed groups in control of the village, so they don’t know which one was responsible.”

A resident from Afrin “who sought refuge in Germany” told Amnesty International:

“I have five apartments in Afrin city and a commercial shop. My friend told me that two of my homes are now occupied by displaced families. I managed to get the phone number of two families, one from Harasta and another from Eastern Ghouta. I called them to ask them to take care of the house but they told me that the house was already looted when they moved in. I had just renovated the house. My problem is not with the families living in the house, but with the armed groups.”

Turkey and armed groups responsible for the military use of schools

Schools either destroyed or occupied.  Afrin University “completely shut down after it was destroyed and looted”.

“According to former teachers displaced to the al-Shahba region, Turkish forces, alongside allied Syrian armed groups, are using Amir Ghabari School in Afrin as military headquarters.

Turkish forces and the armed groups converted the public school in Shara to a police headquarters in June 2018.

Turkish forces are also using another school in Jenderes as a field hospital, according to residents.”

Amnesty, seeking a response from the Turkish government on the situation presented by the  Afrin residents reported:

“On 25 July, the Turkish government responded questioning impartiality referring to the use of terminology such as ‘al-Shahba region’ and ‘autonomous administration’ without providing a concrete response to the findings.”

Not that there is any shortage of humanitarian crises in the region or farther afield that need an urgent and adequate response but we continue to hope that sufficient attention to the lawlessness and contempt for human rights (if not common decency and compassion) witnessed now on an ongoing basis – ( by Human Rights Watch, by The Office of the United Nations High Commissioner for Human Rights  (OHCHR), by The Syrian Observatory for Human Rights (SOHR) and now Amnesty International,  as well as by numerous other individuals and organisations) – since Turkey’s occupation of the region – will bring pressure on the various parties with influence there to seek an outcome where all people, and peoples, in the region can live in peace and get on with their lives…

That or more war, whether it is an Assad led assault to reclaim the areas occupied by Turkey or more or ongoing chaos and mayhem with civilians paying the price…the currently shifting landscape makes all outcomes for the Democratic Federation of Northern Syria unclear.

However, surely it is time to recognize that no solution to the region’s problems can be worth its salt without the active participation of the Kurdish people and the other minorities that make up the historical map of the area and that the Rojavan Revolution now seeks to give a voice to…

Surely it is time for widespread recognition of this necessity – a place, finally, for the Kurds, other than “the mountains”?

In the meantime, as Amnesty says:

“Turkey is the occupying power in Afrin, and therefore is responsible for the welfare of the civilian population and maintaining law and order. So far, its armed forces have failed utterly in these duties. It cannot evade responsibility by using Syrian armed groups to carry out its dirty work. Without further delay, Turkey must end violations by pro-Turkish armed groups, hold perpetrators accountable, and commit to helping Afrin residents rebuild their lives.”

Are you listening, Turkey?