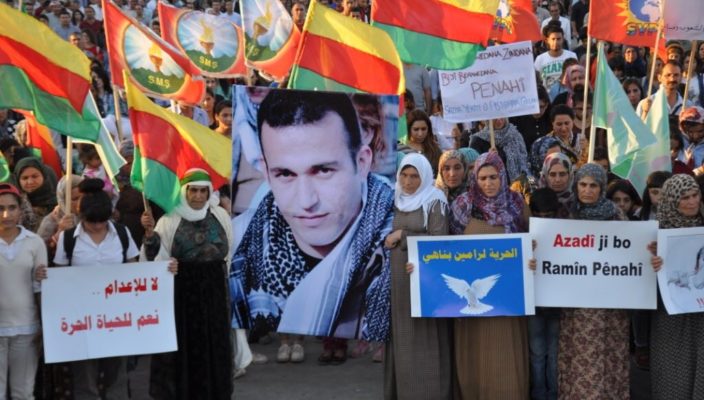 The execution of a Kurdish death-row prisoner has become more likely, despite credible questions regarding violations of due process in his case, torture and other rights violations.

An officer in Rajaee Shahr Prison in Karaj, west of Tehran, has told the prisoner Ramin Hossein Panahi that disturbances in Kurdish-populated regions have increased the chance that he would be executed.

“The prison officer told Ramin that there’s a great chance that his sentence would be carried out because prisoners are not kept in solitary confinement for a long time without a reason,” Ramin’s brother, Amjad Hossein Panahi, told the Center for Human Rights in Iran (CHRI) on September 3, 2018.

“When there are protests or armed confrontations in Kurdistan [Province] or other places, chances that death sentences would be carried out increases in order to intimidate and cause fright,” Amjad added in an interview from exile in Germany.

Since his death sentence was confirmed by Iran’s Supreme Court in April 2018, Ramin Hossein Panahi’s family and lawyers have issued several warnings about his imminent execution.

The 22-year-old member of the outlawed Kurdish nationalist group, Komala, was shot and arrested in an IRGC ambush in Sanandaj, capital of Kurdistan Province, in June 2017. Ramin has insisted he did not draw a weapon and therefore the death penalty issued against him is without foundation.

He has been convicted on the charge of “corruption on earth” and sentenced to death under Articles 286, 287 and 279 of Iran’s Islamic Penal Code.

On August 27 attorneys Maziar Tataei, Hossein Ahmadiniaz and Osman Mozayyan said their client had sewn his lips as a protest for the following reasons:

The UN’s special rapporteur on extrajudicial, summary or arbitrary executions cited concerns that Panahi was denied access to a lawyer, a fair trial, and that he was mistreated and tortured in detention.