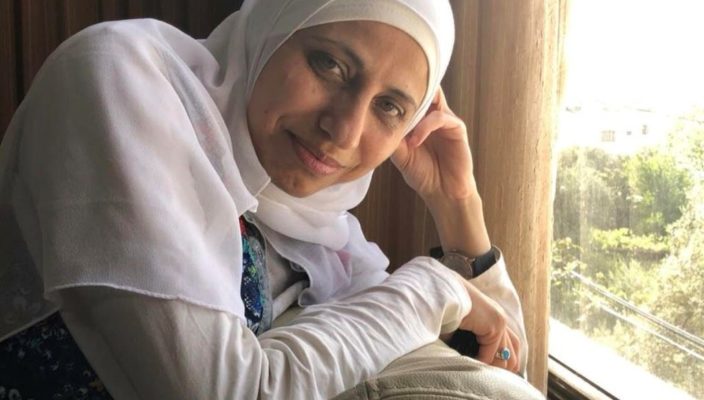 Martin Luther King, Jr. “I Have a Dream.”

On her release she said:

“I am very happy to have freedom at least after three years in prison, remand, house arrest with an electronic cuff and again house arrest…At last I’m free, and I will continue writing. I will not stop. Of course I won’t. The whole case was about a poem.”

She had already spent more than two years and eight months between prison and house arrest for “incitement to violence” and “support of a terrorist organization” for her poem, “Resist, My People, Resist Them,” and her Facebook posts:

“One said, “Allah Akbar and Baruch Hashem, Islamic Jihad declared intifada throughout the whole West Bank and expansion to all Palestine. We should begin inside the Green Line,” a post that got 35 likes. The second showed the wedding of Asra’a Abed, a Nazareth resident who was shot and wounded after drawing a knife at the central bus station of Afula, with the post, ‘I’m the next martyr.’”  (Noa Shpigel)

…a Palestinian poet from the village of Reineh (between Nazareth and Qana of Galilee), she was arrested at 3am on 11 October 2015, on the charge of “incitement (to violence) through social media.” That same month in 2015, violence in the occupied Palestinian territories and in Israel took the lives of 199 Palestinians and 28 Israelis. The charge against her carried a potential 8 year prison sentence. She spent the first 3 months in 3 prisons (Kishon, Damon and Hasharon) before being remanded to house arrest in Tel Aviv away from her family. In July 2016 she was allowed to continue her house arrest in Reineh with her family.

In an earlier interview she said:

Dareen Tatour (“I am accused of words, / my pen the instrument.”) was one of 400 Palestinians in 2016 arrested by Israeli authorities because of their use of social media to resist Israeli violence against the Palestinian people. As Al Jazeera had reported at the time:

“…she had posted a picture of Israa Abed – a Palestinian woman shot at a bus station in Afula while brandishing a knife – with the comment, “I am the next martyr.”  ‘What I meant with that post was that I, as a Palestinian, or any Palestinian, could be killed at any time,’ Tatour told Al Jazeera. On November 2, Tatour was initially charged with inciting violence and terrorism, as well as supporting a terrorist group, in relation to posts on her Facebook and YouTube pages. Since then, the specifics of the charges against her have shifted, and now relate to a poem that was posted to her YouTube account.”

The poem on trial, translated by Tariq al Haydar and whose title translates roughly as “Resist my people, resist,” was published on ArabLit.org in April 2016:

Resist, My People, Resist Them

In Jerusalem, I dressed my wounds and breathed my sorrows

And carried the soul in my palm

For an Arab Palestine.

I will not succumb to the “peaceful solution,”

Until I evict them from my land.

I cast them aside for a coming time.

Which imposed degradation and humiliation

And deterred us from restoring justice.

As for Hadil, they sniped her in public,

Killed her in broad daylight.

Pay no mind to his agents among us

Who chain us with the peaceful illusion.

Do not fear doubtful tongues;

The truth in your heart is stronger,

As long as you resist in a land

That has lived through raids and victory.

So Ali called from his grave:

Write me as prose on the agarwood;

My remains have you as a response.

Reminds you, in a  different tone, for a different time, of Martin Luther King Jr.’s “I Have a Dream“, his public speech delivered to over 250,000 civil rights supporters from the steps of the Lincoln Memorial in Washington, D.C during the March on Washington for Jobs and Freedom on August 28, 1963, ending:

“And if America is to be a great nation, this must become true.

So let freedom ring from the prodigious hilltops of New Hampshire.

Let freedom ring from the mighty mountains of New York.

Let freedom ring from the heightening Alleghenies of Pennsylvania.

Let freedom ring from the snowcapped Rockies of Colorado.

Let freedom ring from the curvaceous slopes of California.

But not only that: Let freedom ring from Stone Mountain of Georgia.

Let freedom ring from every hill and molehill of Mississippi.

From every mountainside, let freedom ring.

And when this happens, when we allow freedom [to] ring,

when we let it ring from every village and every hamlet,

from every state and every city,

we will be able to speed up that day

when all of God’s children, black men and white men,

Jews and Gentiles, Protestants and Catholics,

will be able to join hands and sing in the words of the old Negro spiritual:

Thank God Almighty, we are free at last!”

…From the southern and (northern states) of America…to South Africa and now to  Palestine and Israel and the occupied Palestinian territories, (aware that the current Israeli regime dislikes the use of the word “apartheid”)…

Excerpt From: Martin Luther King, Jr. “I Have a Dream”

‘It Was Another Year’s September’

‘Resist, My People, Resist Them’

‘A Poet’s Hallucinations,’ by Dareen Tatour

A New Translation of Palestinian Poet Dareen Tatour’s ‘I… Who Am I?’

‘A Poet Behind Bars’: A New Poem from Dareen Tatour

New Poems by Dareen Tatour, Under House Arrest in Israel