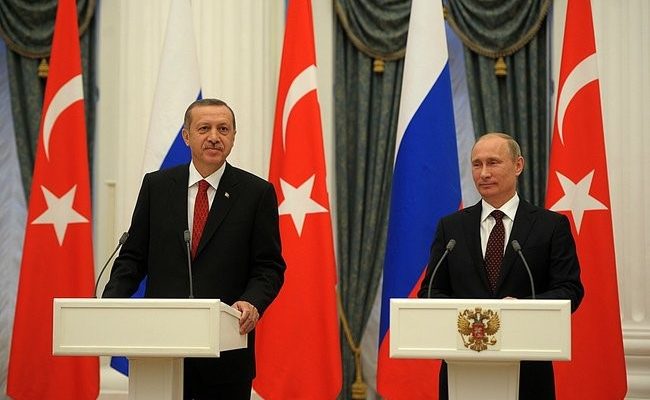 Damascus (GPA) – With Turkey preparing the rebels in Idlib to repel the impending offensive by the Syrian Arab Army it seems likely that this will be the end of Turkish-Russian cooperation in Syria.

To better explain how the battle for Idlib is likely to turn into yet another geopolitical hotspot in Syria, first it is important to remember who is in the Turkish-administered area at the moment.

This story goes back as to the waning days of the battle for Aleppo in late 2016. Syria’s second city was one of the earliest targets once the Syrian Arab Army (SAA) had gone on the offensive thanks to air support provided by Russia.

While this battle may not be fresh in most readers’ memories, if you go back to the final days of the siege of East Aleppo, you may recall that this was the first major surrender of takfiri forces in the Syrian war. This means that this was also the first appearance of the now-infamous green charter buses provided by Damascus to transport enemy combatants out Aleppo.

This evacuation process was repeated in several areas of Syria where the rebels were willing to cut deals with the SAA (although the US handled ISIS evacuations themselves). Just like in Aleppo all of these “moderate rebels” also left on charter buses provided by Damascus for the same destination: Idlib.

For some period of time, while the SAA was cleaning up other cities across the country, these various groups stranded in Idlib spent most of their time fighting each other. This has started to shift recently as the various groups have realized that Damascus is planning to liberate the city.

While these groups failed to coordinate before, it now seems there is an extra element binding them all together: Turkey.

Turkey was placed in charge of this ‘deconfliction zone’ in Idlib as a result of talks between Ankara, Tehran, and Moscow as a result of warming relations of Russia as US-Turkish relations have grown cold. In Syria, this distrust of the US from Ankara was primarily triggered by US cooperation with Kurdish separatists in northern Syria, who have been the targets of Turkish operations which have only been possible thanks to consent from Moscow.

Russia’s consent for the Turkish operations Olive Branch and Euphrates Shield relied on reciprocal concessions from Turkey to show they are a reliable partner. These concessions to Russia (and Syria) included Ankara giving up their goal of ousting Syrian President Bashar al Assad (which Turkish President Recep Erdogan often switches positions on) as well as cutting off their jihadist proxies.

Ankara’s position on the status of Assad is likely to remain unclear on a week-by-week basis depending on Erdogan’s domestic political calculations. As for the terrorist proxies, there is more reason to believe Turkey has increased support in recent months rather than cutting it.

This increase of support for these groups in Syria such as the Al Qaeda affiliated factions of the “Free Syrian Army” is evidenced in areas like the northern Kurdish enclave of Afrin where terrorists have been used as shock troops by the Turkish military. The same turn of events now seems to be happening in Idlib under Turkish direction, as the formerly-feuding terrorist groups are preparing to mount a semi-coherent unified defense against the upcoming FSA assault.

Turkey has made repeated attempts to buy the terrorists in Idlib more time and is still trying to. This pattern played out once again, just the other day in talks between Turkish Foreign Minister Mevlut Cavusoglu and his Russian counterpart Sergei Lavrov. Cavusoglu again tried to buy more time for the rebels in Idlib, assuring Lavrov that Turkey would “alleviate the concerns of our Russian counterparts and get rid of the terrorists,” although he did not clarify how.

Cavusoglu may not have a solution to offer for Idlib but he did assure Lavrov that any military offensive should be off the table, as it would cause a “catastrophe.” This shows that Ankara is continuing to protect these groups on Idlib despite their multiple assurances to Russia that they can somehow reconcile Ankara’s goals in Syria with Moscow’s.

Turkey is in desperate need of new partners to ensure their security, which is why they have moved closer to Moscow as relations with Washington have soured. However, there are many situations like Idlib where it becomes clear there is no way to reconcile Turkish foreign policy goals with those of Syria.

Turkey may want to leave NATO, and the Atlanticist sphere in general, but if they plan on cooperating with Russia beyond just purchasing weapons systems Ankara is going to have to re-tool their ambitions for the greater Middle East. Erdogan clearly thinks of Turkey as a power broker in the region but without US imperialism backing Ankara through NATO, this simply isn’t true. If Erdogan wants to leave the US behind for Russia, he’s going to need to develop policies that make him a desirable ally rather than an adversary by default.

This article is licensed by Geopolitics Alert under a Creative Commons Attribution-NonCommercial-ShareAlike 4.0 International License.