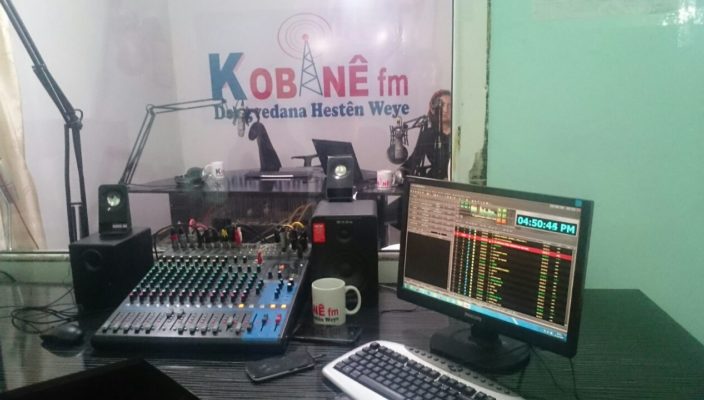 Seven people, members of the student confederation, started broadcasting in a radio station located just outside of the city of Kobane, in 2012. They had occupied the radio station belonging to the Syrian regime. “The regime had left – recalled Muheddin, who joined the radio 6 years ago – as the Rojava Revolution had succeeded. They had left behind all equipment, so when we entered the radio, the technical equipment, the mixer, microphones, were all here”.

The radio is on a small hill just outside the city, surrounded by golden-coloured fields, the Turkish border just a few kilometres from it.

When DAESH was about to launch its attack on Kobane, in September 2014, the radio workers were informing the people on their movements. They didn’t leave the radio station until DAESH was only three kilometres from the city. Then they had to leave the studios and go to the city. Some of the radio workers actually joined the resistance, led by the YPG/YPJ, the People and Women’ Defense Units.

Indeed DAESH stormed the radio station and took control of it. “They destroyed everything – Muheddin recalled – they blew up the equipment and the radio antenna”.

The heroic resistance of the people of Kobane led by their Defense Units defeated DAESH, after four months of heavy war whose effects can still be seen in the city, three years on, despite the huge work of reconstruction carried out by the Autonomous Administration.

Ster, who is from Afrin, and has joined the radio some time ago, recalled that it was after the liberation of Kobane, on January 2015 that the old journalists, joined by a new fresh team, began talking about the possibility to start the old radio again. And in May 2015 they actually did so. The old radio station had been destroyed so they established their broadcasting headquarters in a house in the city centre (today it is the Mivan Xane, the Canton’s Guesthouse). The journalists fondly remembered that they have been trained by Dislan Ibis, who had first founded Radio Kobani, then went to work for ANHA and was martyred in Deir Ez-Zor when a car bomb went off.

The group of journalists finally could moved back in the old radio station, 16 months ago. The group is made up of 10 people (7 women and 3 men) are working to ensure broadcast from 7.30 am to 11 pm proposing a range of programs going from news (4 times a day in Kurdish and Arabic) to in-depth political, social, cultural programs.

The radio can be listened to both on internet and normal frequency. “Indeed – said Ster – one of the problem we have is that we are forced to constantly change the frequency because being so closed to the Turkish border means that Turkey is attacking and hacking our frequency very often”.

The other problem Radio Kobane faces is the low kilowatts available. They are now transmitting on a 3KW transmitter but they would need at least 5KW, said Muheddin.

“We would like – said the journalists – to get in touch with alternative radio around the world, so to share our experience but also to try and get some work done together, to get some collaboration and some solidarity”.