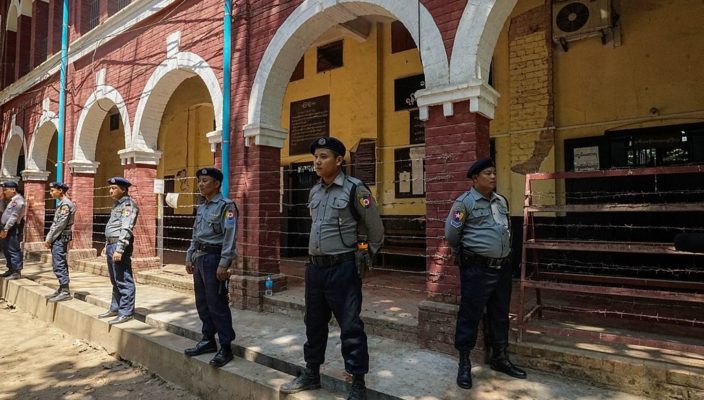 On September 3, sentences of 7 years were handed down to journalists Wa Lone and Kyaw Soe Oo, arrested in early December last year and whose only crime is that of reporting on the murder of innocent civilians in the outrage of ethnic cleansing by the military regime in Myanmar

“…But what some have called ‘ethnic cleansing’ and others ‘a slow genocide’ has persisted – and recently accelerated. The images we are seeing of the suffering of the Rohingya fill us with pain and dread.” (Desmond Tutu Nobel Peace Prize laureate)

As an update to the recent U.N. call for the Myanmar military to be prosecuted for war crimes and crimes against humanity, the judicial system in that country has responded by shooting the messenger.

On September 3, sentences of 7 years were handed down to journalists Wa Lone and Kyaw Soe Oo, arrested in early December last year and whose only crime is that of reporting on the murder of innocent civilians in the outrage of ethnic cleansing by the military regime in Myanmar… and in particular their investigation of the killing of 10 Rohingya men and boys by soldiers and police in Inn Din, a village in Rakhine State.

You can see the image, moments before ‘execution’, online here. “The slain villagers included fishermen, an Islamic teacher and two high school students…”

“Wa Lone and Kyaw Soe Oo shed light on some of the worst abuses. Among them were photographs of the massacre of 10 Rohingya men and boys who were tied together and executed in the village of Inn Din. The photos prompted a rare admission of wrongdoing by Myanmar’s military, which has otherwise rejected claims that it violated human rights in what it calls an antiterrorism campaign.” (LOOKEAST)

…Of course, charges against the journalists were more ‘political’: “illegal possession of official documents” which violates the Official Secrets Act, and carries a sentence of to 14 years in prison.

The journalists who were denied bail pleaded not guilty and asserted that they did not solicit or knowingly possess any secret documents.

They also claimed in their defense that they were framed by police who planted classified documents on them.

“During the trial, Police Capt. Moe Yan Naing testified that a police general had given instructions to entrap the reporters. Lance Cpl. Naing Lin acknowledged meeting the reporters but denied giving them anything.” (LOOKEAST)

In its statement on September 3, the Committee to Protect Journalists (CPJ) said:

“‘Today’s ruling against Reuters reporters Wa Lone and Kyaw Soe Oo on bogus charges marks a new press freedom low for Myanmar,’ said Shawn Crispin, CPJ’s senior Southeast Asia representative. ‘The process that resulted in their convictions was a travesty of justice and will cast Myanmar as an anti-democratic pariah as long as they are wrongfully held behind bars. We call on Myanmar’s civilian authorities to immediately release the journalists.’

“Defense attorney Khin Maung Zaw, speaking in front of the court after the verdict, said the journalists would appeal the ruling ‘as soon as possible.’ He said: ‘The verdict is bad for the rule of law, bad for freedom of expression, bad for the right to information, and bad for democratic concepts,’ according to a live Reuters feed monitored by CPJ.

“The reporters have been jailed since their arrest on December 12, 2017, after they had dinner with and received documents from two police officers in the commercial capital of Yangon. They were charged under the Official Secrets Act for possessing the documents, which authorities later claimed were sensitive to national security. The journalists were repeatedly denied bail.” (CPJ)

The U.N. High Commissioner for Human Rights, Michelle Bachelet, said the verdict “sends a message to all journalists in Myanmar that they cannot operate fearlessly, but must rather make a choice to either self-censor or risk prosecution”. (Reuters)

This decision, so soon following international condemnation over the mass torture and massacre of innocent civilians, can now only add to the already-substantial and tormented web of sectarian persecution in the country, creating more hatred, confusion and fear… a direct product of Myanmar’s denial of any atrocities in its ‘counterinsurgency operation against Muslim militants’.

If the emperor cannot be told he is walking around naked or if the people, from whose needs and hopes and aspirations the future must evolve, are to informed with lies and educated with propaganda so that good sense and wisdom (as well as compassion) disappear in a country long shaped with an ethic inspired  by Gautama Buddha’s teaching, what hope is  there?

After years of applauding the courageous stand of Aung San Suu Kyi and allowing it serve as a light to lessen the enormous darkness of our modern world – of injustice, outrage, poverty and gross inequality – Myanmar now seems to be taking the lead, (along with a few other deeply-dark places) in leading the human race deeper into this forest of ugliness where a crime is considered good politics and rights, respect, equality and co-operation, as wellas being seen as ‘bad for business’, are also no longer seen as being able provide a map to lead the human race out of the darkness.

As for the journalists behind bars:

Kyaw Soe Oo: “We were sent to prison to close the eyes and ears of people in Myanmar.”

“I have no fear,” said Wa Lone, “I have not done anything wrong … I believe in justice, democracy and freedom.”

Myanmar police officers stand on guard outside a courtroom in Insein Township during Wa Lone and Kyaw Soe Oo’s trial.