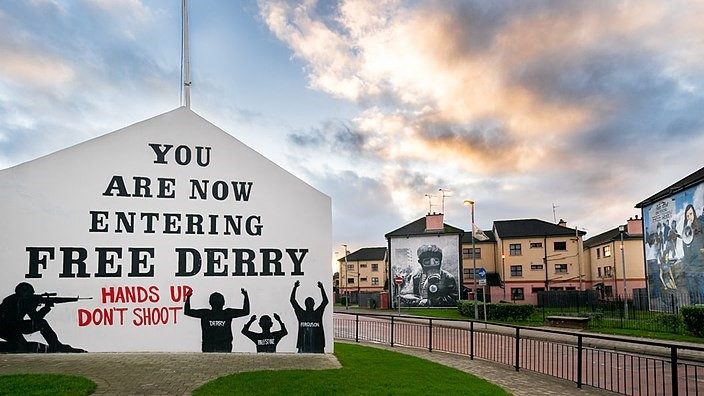 ‘A Mother Brings Her Son to Be Shot’ – documentary film

‘A Mother Brings Her Son to Be Shot’ – documentary film

“This is my favourite weapon – it’s a hatchet. You can use it to disintegrate the head…” (12-year-old Kevin Barry O’Donnell, in Sinéad O’Shea’s documentary)

Released in Irish cinemas on Friday 14 September – ‘A Mother Brings Her Son to Be Shot” – is a new documentary from journalist and filmmaker Sinéad O’Shea who takes a look at the divided city of Derry in the “still occupied” 6 counties of Northern Ireland 20 years after the “peace process”; peace, though, might still be a question waiting to be answered if we were aware of all the madness that has happened and continues to happen in this small tormented country (now, of course, once again being tormented by the glaring contradictions of wealth and rampant inequality). Sinéad O’Shea produces her own pictures of this, north of the Border, as she sets out to explore the question: What in the name of god would  encourage a Derry mother to bring her son to be shot?’

Initially screened in London, Dublin, Glasgow and both the Belfast International Film Festival and the Galway Film Fleadh,  as well as at festivals in Copenhagen, New Zealand and Sydney, O’Shea’s documentary is filmed in the Creggan, a working-class housing estate and one-time “Republican ghetto” in Northern Ireland’s “Free Derry”, still haunted, obviously, by the grim spectre of “the Troubles”.

“Majella’s community does not believe in the police or the government. Previous decades of what they see as state oppression have not been undone as far as they are concerned. This means that when there is a problem, they seek to resolve it internally. Philly O’Donnell had been accused of drug dealing, and so that situation was “looked after” from within. Unsurprisingly, the shooting (Philly was “kneecapped” or shot in the back of both legs to avoid an even harsher murder “sentence”) had many unintended consequences and I filmed with the family over the next five years exploring those effects.”

Majella O’Donnell, a mother of two, (her other son, Kevin Barry O’Donnell,  is also shown in the Trailer below with his bag of “tools”), took her teenage son Philip “Philly” O’Donnell one night in 2012 to a laneway near her home to be shot in the legs by local gunmen. This was a pre-arranged “punishment shooting” for  dealing drugs; (Philly still contests the charge levied at him by the dissident Republicans). The O’Donnell family live in Derry’s Creggan estate. Majella O’Donnell knew that more severe punishment might have been meted out if Philly hadn’t turned up to be shot.

Speaking on the making of the film, O’Shea said:

“Majella was in such a vulnerable position originally… I knew quite soon that it wasn’t going to be a piece of journalism, it was going to be a documentary…There was never any sense that I was the person in charge of things and that they were my subjects. It was a very equal relationship.

“I think if I had been more journalistic and been more focused on facts and figures and getting soundbites out of people, they wouldn’t have done it…They were the people who were giving me advice, and who had their own insights into things.”

In 2008 Republican Action Against Drugs (RAAD) an Irish republican vigilante group active mainly in Derry and the surrounding area, was set up to “target those who it claimed were drug dealers. The group’s methods included shooting the alleged dealers in the arms and legs (“punishment shootings”); pipe bomb or arson attacks on the property of alleged dealers; and warning, threatening or banishing the alleged dealers.”

In July 2012, it was announced that RAAD was merging with the Real Irish Republican Army and other independent republican paramilitary groups to form what is referred to as the New IRA.

Recently in April this year in a statement to the Irish News, “an organisation calling itself the Irish Republican Movement said that anyone involved in the drugs trade within nationalist communities must “cease immediately”, or face death.” Sinn Féin’s MLA Gerry Kelly called on this new group to “disband and get off the back of the community…There is absolutely no place for this group” the Irish Times reported.

As everyone who knows points out, after the dignitaries, like George Mitchell and Bill Clinton leave, people usually  return to the situation they have always known. To the media and most politicians, the “Troubles in Northern Ireland” ended in 1998 with the signing of the Good Friday Agreement, but watching this portrait of ordinary working class people in the extraordinary (if only, looking at the amount of conflict impacting civilians worldwide) circumstances these people exist within, the war is not over, but is ongoing and endless through its different “fronts’ where, for instance, in the Creggan, the institutions of the state, like the police, remain discredited and not just in these northern policing communities but across the whole island in places where disadvantage prospers despite enormous wealth being generated…

“I definitely think they are two aspects to the community that are really underreported, that unemployment is such a problem there and PTSD is so prevalent…” (Sinéad O’Shea)

… and where “war” becomes an ongoing process of economic, social, personal, spiritual and psychological impoverishment where “poverty” and violence are not just black and white clichés – but complex realties intertwined with the lives of ordinary men and women, and seen here tragically, children… “More people have taken their own lives there in the last 20 years than were killed during the Troubles.”

“A war doesn’t end just because there’s a peace agreement, or because Tony Blair and Bill Clinton say it’s over… It takes such a long time I think for people to recover from that level of trauma.

“Some of the people I met during the making of my film are just waiting for an excuse to return to the Troubles. They have not yet recovered from the conflict, nor accepted that the political process requires them to “move on”. They continue to nurse grievances, they plot, they openly carry arms, indeed they yearn for bigger and better weapons. They miss the drama of war, and the identity it gave them. Their children have grown up with this. None of this suits the narrative that the Good Friday agreement brought peace to Northern Ireland. The agreement was a vital achievement for all involved, and should be protected, but some sections of the community still feel that they lack support and believe the peace process has not provided for them.”

‘A Mother Brings Her Son to Be Shot’ is produced by Sinéad O’Shea, Ailish Bracken and Katie Holly of Bl!nder Films with Figs Jackman and André Singer of Spring Films and Oscar-nominated executive producer Joshua Oppenheimer. The production and release received the support of Fís Éireann/Screen Ireland, RTÉ and Inevitable Pictures.

And while communities such as those living in violence and trauma such as the Creggan in “occupied” Derry are obviously more important than the artists who temporarily visit them and move on, Sinéad O’Shea, before making this, her feature documentary debut, has a list of other accomplishments as a writer and director in an often arrogantly oppressive male environment, previously winning an Irish Media Justice Award and an Irish Film and Television Award. She has worked as a journalist for RTE, the BBC, The Irish Times, The Guardian, The New York Times, Channel 4 and Al Jazeera, and also, apparently, “has the 60-minute documentary ‘The McCanns Versus The Media’ on her CV”.

She studied film production at the Dublin Institute of Technology, specialising in cinematography, but “the film industry was very challenging when I began in Ireland. It was a big advantage to be able to shoot and edit myself, though…” and is now “making a short drama called Humblebrag, and developing her first fiction feature, Female Terrorist.”

If you get a chance, watch how life is for too many of the often silent-and-silenced citizens in this brave ‘new Ireland’…

“Paramilitary punishment shootings and beatings are rising. But, as with the Brexit border issue, the UK doesn’t seem to care…”

A Mother Brings Her Son To Be Shot (Trailer)