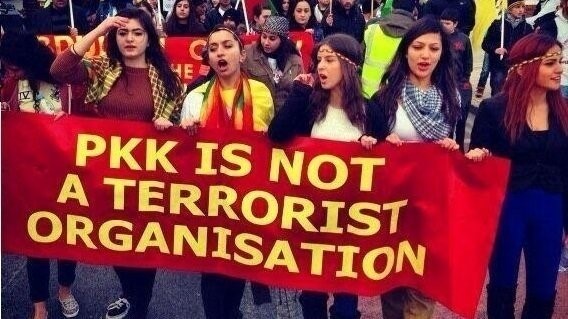 “PKK IS NOT A TERRORIST ORGANIZATION!”

Murat Güleryüz, human rights activist and Rojava Support campaigner has started a petition to the US State Department to have the PKK delisted in the U.S. as a terrorist organisation

Murat Güleryüz, MEDNEWS Co-Founder, human rights activist and Rojava Support campaigner has started a petition to the US State Department to have the Kurdistan Workers Party (PKK) delisted in the U.S. as a terrorist organisation.

In mid-2015, just months before the Turkish Parliamentary elections, the Turkish Regime of Recep Tayyip Erdoğan, concerned at the prospect of losing a parliamentary majority because of the electoral gains of the Kurdish HDP (Peoples’ Democratic Party) aborted peace talks with the Kurdistan Workers Party ongoing since the end of 2013 and quickly resumed its war against the Kurdish people in south east Turkey. Since then tragedy has followed tragedy, not least the recent Turkish invasion of Afrin in Northern Syria. Witnessing the enormous suffering experienced by people in the region there can be no sane alternative to a resumption of peace talks.

The international community, who were largely responsibly in the first place for the exclusion of the Kurds from the lands they had lived in for centuries, if not longer, and despite the enormous profits made through their arms sales, need to take a stronger stand on peace with justice for the Kurds in this region and encourage the main players, including NATO ally, Turkey to participate.

Delisting the PKK would be an important initial step to support this peace process.

“The PKK is presently listed as a terrorist organization by Turkey, the EU, and the United States. The United States State Department lists the PKK as an FTO. According to the State Department, “Foreign Terrorist Organizations (FTOs) are foreign organizations that are designated by the Secretary of State in accordance with section 219 of the Immigration and Nationality Act (INA), as amended. FTO designations play a critical role in our fight against terrorism and are an effective means of curtailing support for terrorist activities and pressuring groups to get out of the terrorism business.”

The Kurdistan Workers Party or PKK, has been listed as an FTO by the US State Department since October 8th, 1997. The US State Department legal qualifications for FTO designation, under Section 219 of the INA (Immigration Naturalization Act) as amended, declares that an FTO is an “organization’s terrorist activity or terrorism must threaten the security of U.S. nationals or the national security (national defense, foreign relations, or the economic interests) of the United States.”

For several years now the PKK and the United States Armed Forces have been directly collaborating and successfully working together side by side, to directly fight the Islamic State and other terrorist’s groups in Syria and Iraq. The PKK and their affiliates like the PYD, YPJ, YPG in Syria, and the political party HDP in Turkey have come under targeted intimidation, attack and retribution by the Turkish government under the pretext that the PKK is listed as a terrorist organization by the United States and the EU.”

Though Change.org tells us that the petition has been active for 10 months now, as of 16 October 875 people have signed. It is surely time for more media outlets to demand: Time for peace in Kurdistan – start the process – Delist the PKK!

Delist the PKK – Freedom and Justice for the Kurds

“Peace in Kurdistan Campaign believes that framing the Kurdish-Turkish conflict in terms of ‘terrorism’, far from solving the violence, has fuelled further conflict and resentment. Thousands of peaceful human rights activists and demonstrators, as well as elected politicians, lawyers and journalists, have been imprisoned in Turkey for entirely non-violent activities, deemed by the state security apparatus to be acts of terror against the state.”

The Case for Delisting the PKK as a Foreign Terrorist Organization

European Court of Justice to rule on delisting the PKK