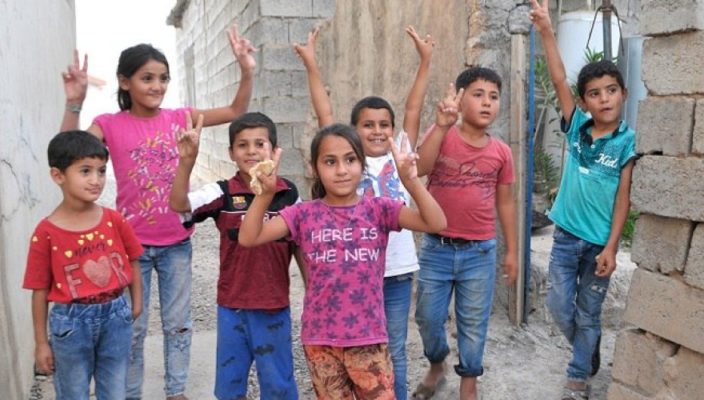 Maxmur is a bit the ‘mother’ of the Democratic Autonomy model put in practice. Here the over 13 thousand refugees from North Kurdistan have long organised themselves following the principles and the model imagined by Kurdish People’s Leader Abdullah Ocalan.

Most of the refugees are from the villages in the region of Sirnak: they were forced to flee their houses when, in the early ‘90s, the Turkish army adopted the policy of ‘direct mass extermination’, burning the villages (in those years over 4,000 villages were burned down) and forcing people to leave their houses and flee across the border or towards other North Kurdistan cities.

Maxmur was a deserted land, Saddam Hussein, as many of the older refugees recall, offer Kurds to seek shelter there. “I don’t know – say Sadiq who has been in the camp since the very beginning –  whether we were also supposed to thank Saddam for allowing us to stay literally in hell”.

There was no water and many children, no trees and a scorching sun, this piece of land was quite far from Erbil, so it was difficult to get food and any product.

Yet the Kurdish refugees were determined to turn this desert into a place to live in. “Of course, we believed this was going to be temporary – said Sadiq – and that we could go back to our villages soon. We are here over 20 years”. And the desert land is now equipped with water, green areas, schools, library, greenhouses to grow vegetable, fruit trees… “The children – said Sadiq – were eating earth, as there was no food we could give them, but those times are gone”.

Of course everyone in Maxmur is sill longing for going back. But in the meantime they have organised themselves following the Democratic Autonomy and self-government structures.

A number of associations, trade unions and activists from Italy has been visiting the camp of Maxmur in South Kurdistan, just after ANF visited it.

As the Italian delegation was told, the camp is run by a People’s Council, which has 131 members: 31 of them form a committee where every ‘section’ in which the camp is divided is represented.

Because of the war in Syria, many people have been reaching Maxmur in the past few years.

One of the main task of the Women Council is to address and try and solve issues related to the patriarchal mentality. Discussions and debates among refugees in the camp has brought to the ‘legalisation’ of divorce, the acceptance of contraception and homosexuality. The people have abolished the law allowing polygamy, one of the first to do so.

The Italian delegation has visited the new hospital. ANF was there on the day of its opening. The little hospital works from 1 pm to 8 am. The old structure is open from 8 am to 1 pm and is controlled by the UNHCR.

There are two doctors and some nurses working in the new structures, they are there on a voluntary basis although they received a little salary to cover their expenses. This hospital is well equipped and in fact it seems like a doll-hospital, small but with everything in it, from the pharmacy, to the little surgery hall, from the maternity ward to the x-rays hall.

The problem, as the doctors pointed out, is the electricity, available just 12 hours a day. There is a generator but is not sufficient. The other problem is the lack of an equipped ambulance.

On the other hand, the hospital has already made a name for itself, so much so, that there are people coming from outside the camp asking to be seen by the Maxmur doctors.

The Italian delegation has learned of the attacks launched by DAESH mercenaries on Maxmur. “We defended ourselves – said Sadiq – and organised our defence unit to protect the people and the camp”. Maxmur had its martyrs, and in the House of Martyrs the photos of these sons and daughters of the camp are paid tribute to. What catch you when you enter and walk in the middle of this room, surrounded by dozens of smiling faces can hardly be described by words. You feel the commitment, the love, the altruism of all these mostly young people who went to the mountain to defend their right to freedom and existence.

There are many children in the Camp, to prove that life prevails. They are going to school here. In Maxmur they can complete their secondary school, then they have to go outside for university.

The secondary school is attended by over 700 students, from 16 to 20. There are 23 classrooms and 33 teachers.

The women cooperative is responsible for the nursery: there are 250 children attending the 5 creches available.