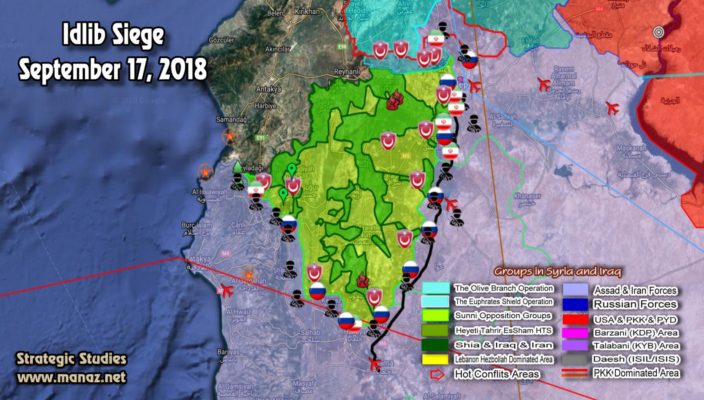 Syria: Will the Russia/Turkey deal on Idlib hold?

Idlib has been a rebel stronghold since the start of the uprising against Assad in 2011. More recently it has been a gathering place for rebels forced to withdraw from other parts of Syria

After the meeting, it was announced that Putin and Erdogan had reached an agreement on the future of Idlib, a province in northern Syria.

Idlib has been a rebel stronghold since the start of the uprising against Assad in 2011. More recently it has been a gathering place for rebels forced to withdraw from other parts of Syria. The rebels control most of Idlib and parts of adjacent provinces.

The Sochi agreement proposed the creation of a “demilitarised zone” (DMZ) around the rebel-held area. Within the DMZ, no heavy weapons would be allowed. Also, those rebel groups classified as “terrorist” (including Hayat Tahrir al-Sham, the strongest group) would have to withdraw from the DMZ altogether.

Initially, the exact location of the DMZ was unclear. Many people assumed the ban on heavy weapons would apply on both sides of the frontline between government-controlled and rebel-controlled areas.

But it now seems clear that “demilitarisation” will only apply on the rebel side. Thus the deal is very one-sided.

It is also unclear how groups classed as terrorist would be forced to withdraw from the DMZ.

The agreement, if it is actually implemented, is likely to have a short lifespan. Russian officials have said the agreement would only be temporary, and the whole of Syria must eventually come under the control of the Assad regime.

Nevertheless, Turkey pressured the rebels to accept the Sochi deal.

There are many different rebel groups in Idlib, some of which are armed and funded by Turkey. Some have been co-opted to such an extent that they effectively take orders from the Turkish state.

Turkey has used some of these co-opted rebel groups to attack Rojava and the Democratic Federation of Northern Syria (DFNS) in Syria’s north.

Rojava is the collective name for three predominantly Kurdish areas of northern Syria. A popular uprising in July 2012 freed Rojava from Assad’s rule and initiated a democratic revolution in the area. Later the revolution spread to adjacent non-Kurdish areas, leading to the formation of the DFNS.

Turkey, which oppresses its own Kurdish population, has always been hostile to Rojava and the DFNS. Since 2012, Turkey has encouraged the Syrian rebel groups it supports to attack Rojava.

This hostile policy culminated in the invasion of Afrin, a predominantly Kurdish area of north-western Syria, in January by the Turkish army and co-opted rebel groups.

Russia, which controls the airspace over Afrin, allowed Turkish planes to bomb the area and Turkish troops to invade it.

Already in 2016, Turkey had sent troops into the Jarablus/Azaz/al-Bab area, adjacent to Afrin, accompanied by allied rebel groups. Russia accepted this invasion because it had the effect of taking rebel fighters away from the war against Assad. This contributed to Assad’s victories over the next two years.

Relations between Turkey and Russia, previously hostile, have improved over the past two years. But this does not mean they always agree.

Recently, Russia threatened an all-out assault on the rebels in Idlib. This alarmed Turkey. It would have resulted in hundreds of thousands of refugees fleeing to Turkey, which already has 3.5 million refugees.

It seems that Russia and Turkey have now agreed on a strategy of pressuring the rebels to retreat step by step. The withdrawal of heavy weapons from the DMZ would be the first step towards removing the rebels from Idlib altogether.

But the agreement could still break down. Some rebels may defy Turkey’s pressure to accept the Sochi plan. It is unclear what Turkey would do about this.

Another potential source of conflict is that Turkey may try to keep control of some parts of northern Syria indefinitely, whereas Assad wants to regain control of the whole of Syria.

Meanwhile, guerrilla resistance continues against the Turkish army and its allied armed groups in Afrin.

“Green Left Weekly is a proudly independent voice committed to human and civil rights, global peace and environmental sustainability, democracy and equality. By printing the news and ideas the mainstream media won’t, Green Left Weekly exposes the lies and distortions of the power brokers and helps us to better understand the world around us.

Green Left Weekly, launched in 1990 by progressive activists to present the views excluded by the big business media, is now Australia’s leading source of local, national and international news, analysis, and discussion and debate to strengthen the anti-capitalist movements. It is published in hard copy as well as online.”

Material published on Green Left is very welcome to be reposted, providing green Left is credited and a link back to the original is included.