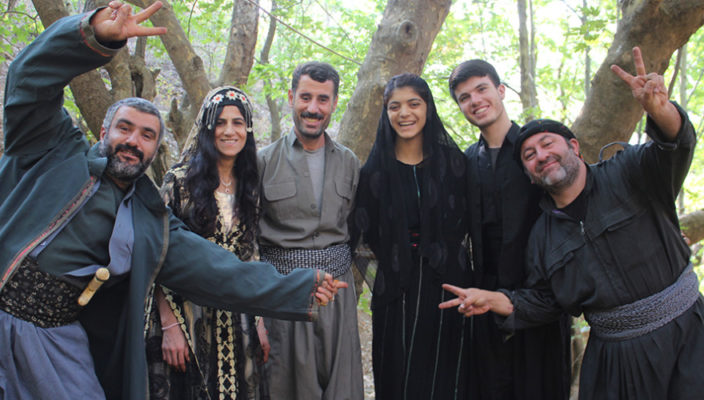 The guerrilla theatre group  Şanoya Çiya (Mountain Theater) has been working within the frame and activities le by the PKK Cultural and Artistic Committee (TEV-ÇAND) in the Kurdistan mountains.

The group has presented 2 new plays this year. The plays have been performed a dozen time in the Medya Defense Area.

The most recent plays Dara Jiyane (Tree of Life) and Buka Axê (Bride of the Land) were written and directed by Şanoya Çiya members and the audience, all guerrillas, have showed great interest.

The play Buka Axê was performed early this year, to mark the anniversary of the martyrdom of Yekta Herekol, a guerrilla who dedicated much work to guerrilla mountain theatre.

Buka Axê is a drama/comedy, written by Ekin Ronî, Zozan Qamishlo and Beritan Raman. The play was directed by Kurdê Tavya.

There are 8 actors in the play, which deals with the Turkish state burning and evacuating villages during the ‘90s, the alienation which results from the evacuations within the Kurdish community and the conflicts that arose when Kurds migrated from villages to cities.

The play draws attention to the conflict between the rural and the urban, and discusses Kurdish People’s Leader Abdullah Öcalan’s doctrine.

The plays and videos available so far, can now can be watched at: