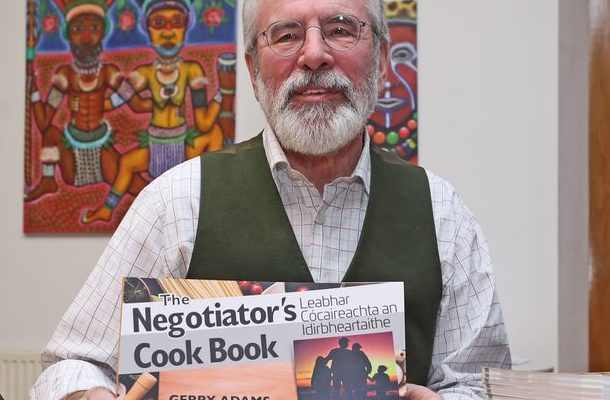 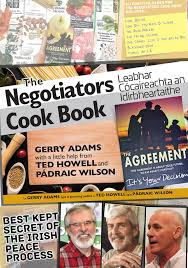 Countless books have been written about the Irish peace process. Its origins – the principle characters and key dates. Who met who, and when, and where, and what was said?

And yet, said former President of Sinn Fein, Gerry Adams, “there are still aspects of that process which have not been aired in public”.

Adams said he is referring to “private meetings that took place. Conversations that were held in quiet, out of the way places involving men and women who are not household names”.

In short, according to the former Sinn Fein President, and chief negotiator, there is another book – a negotiators book – still to be written. “But this, will happen – said Adams – one of these days”.

In the meantime, readers can enjoy another book. “Definitively – said Adams – not the negotiators book”.

The book, which has just hit the shelves is called “The Negotiators Cookbook” and, as the cover said it has been written by Gerry Adams himself with “a little help from Ted Howell and Padraic Wilson.

It’s a book, said Adams, that “lifts the lid on one aspect of the negotiations known to only a few. When you bring a large team of hungry republicans together for days – sometimes weeks on end – how do you feed them? This is not a frivolous matter. There is a psychology to the planning and running of negotiations”.

The book will take us to Castle Buildings (in Stormont, North of Ireland) where the Good Friday Agreement negotiations occurred. “They had a good canteen. – remembered Adams – Siobhan O’Hanlon and Sue Ramsay [of the Sinn Fein negotiation team] developed a great relationship with the catering staff that ensured the Sinn Féin team had tea, coffee, sandwiches, and hot food readily available”.

In the years since the Good Friday Agreement was signed, Adams recalled “negotiations would sometimes move to other venues. Downing Street, Leeds Castle, Weston Park, Lancaster House, St. Andrews, Hillsborough Castle, Castle Buildings and Dublin Castle. The hours could be long. Round the clock”.

And then it was really luck ending in one place or another, because not all venues and hosts showed the same ‘sensitivity’ when it came to feed negotiation teams.

“Talks in Downing Street – recalled Adams – were a particularly hungry event. It may not look it but the building on the inside is very large. And there are lots of people working between the interconnecting buildings that run the length of the street. But the British idea of welcoming the negotiating teams didn’t extend to providing food”.

And just to clarify what that meant, Adams added: “It didn’t matter if you were there from early morning to late at night, or whether you were a unionist or republican, all that was provided was an occasional cup of tea or coffee and maybe a biscuit”.

Food, said Adams “is a simple way to break down barriers and create a relaxed atmosphere. When the negotiations went into the wee hours at Hillsborough Castle and elsewhere we would send someone off to the local chip shop”.

But then, as Adams recalled, an event happened, or rather someone appeared on the scene, and things – food wise – changed dramatically and for the best. “Ted Howell – said Adams – stepped into the breach. As well as being an indispensable member of our negotiating team from the days when I was first meeting John Hume and the SDLP in the 1980s, Ted is also a first class cook. A culinary master”.

Adams indulged in the “soups and baked bread” that Howell brought up to the negotiations. This evolved over time “into him arriving with bags laden with tubs of pasta, spaghetti bolognese, lasagne, salads, pies, hams, fish dishes, curries, soups and beans. Ted loves to cook with beans and his home-made breads, still warm, are delicious”.

There is room for another special cook, Padraic Wilson, a “master baker” in the Sinn Fein team.

“His specialities – said Adams – are fine deserts and pastries of all kinds, including exotic moist fruit cakes. Delicious and delightful”.

This cookbook then, will not just give an interesting and peculiar insight into the Irish Peace Process negotiations, but will also offered readers the opportunity to try out the recipes and the dishes that fed the Sinn Fein negotiating team.

“They would grace any dinner table. – said Adams – They are also healthy and nourishing. So, enjoy and bon appetite”.