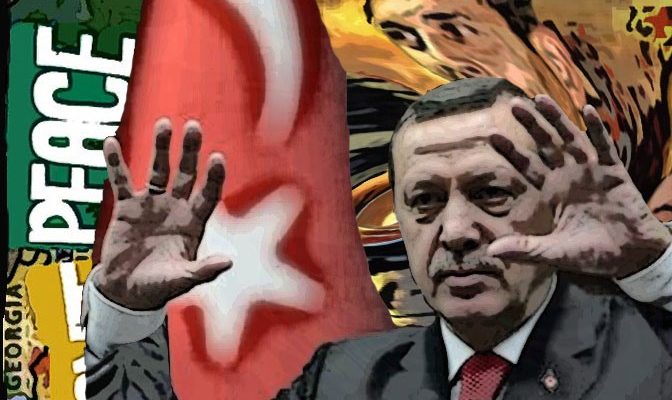 “Turkey’s attacks on the Kobani countryside and Tel Ebyid villages is considered as giving ISIS aid to organize it’s ranks…” said Hakki Kobani, for the

“Our preparations and plans [for an operation] are done, we will soon bring down the terror formation east of the Euphrates…” Turkish President Recep Tayyip Erdoğan

As if the blood shed by the people of the Afrin Canton was not enough, followed, of course, by nearly a year now of lawless rule in the Kurdish area by the Turkish military and the not-far-from-criminally-organised gangs that go under the pseudonym of the Turkish Free Syrian Army… Recep Tayyip Erdoğan having just met with Germany, Russia and France at a quadrilateral summit on Syria in Istanbul “to stress the importance of peace”,  simultaneously put recent threats against the Kurds into action in an unprovoked and sustained shelling of Kurdish areas across the border into Northern Syria.

So far the attacks have killed at least one fighter Erka Xwe Parastine with many civilians injured, and extensive damage done.

On the 28 October the Syrian Democratic Forces issued a statement challenging Turkey’s bombardment of the civilian areas around Kobane:

“Turkey’s attacks on the Kobani countryside and Tel Ebyid villages is considered as giving ISIS aid to organize it’s ranks…” said Hakki Kobani, for the SDF.

While the SDF has been engaged in fighting the surviving pockets of ISIS resistance in the Deir ez zor region and Recep Tayyip Erdoğan was talking ‘peace’ in Istanbul, the Turkish military was busy shelling civilians in the Kobani countryside and the nearby villages.

Following this statement it was reported that the Syrian Democratic Forces have paused operations against ISIS in Hajin due to these ongoing Turkish attacks.

This was followed on the 31 October by the SDF also affirming their right to retaliate against the NATO ally for its unprovoked aggression against local civilians:

“While our forces are leading an unrivaled war against Daesh terrorists, the Turkish occupation army is violating all military rules of engagement and attacking the positions of our fighters along the border with Turkey.

“We reaffirm our commitment to the right to respond to all forms of attacks against our regions and to use this right as long as necessary.

In this context, on 31 October, our forces replied against the attacks of the Turkish occupying Power and its shelling of our civilian areas at AL-Saleem village near Kobani, within the framework of their right to legitimate defense and in accordance with the rules of engagement. A Turkish military vehicle was destroyed by our fighters.”

Also on the 31 October 2018  the General Command of the Syrian Democratic Forces released a  further statement again accusing the Turkish regime of actively supporting ISIS/ISIL/Daesh, an accusation that has long been made against the regime of Turkish President and Chairman of the ruling Justice and Development Party Recep Tayyip Erdoğan and similarly, long ignored, by Turkey’s allies in the NATO camp.

“The attacks of the Turkish state have continued, on the evening of 30/10/2018, they shelled the crossing border gate of Tel Ebyad city, which lead to the death of a fighter and injured another one.

“We, in the Syrian Democratic Forces consider these attacks as a direct support provided by the Turkish state to ISIS, and it started with full coordination and in the same time of the ISIS attacks on the Hajin area recently, we also inform the world, that the Turkish attacks in the north and the ISIS attacks in the south against our troops had forced us to stop our current operation temporarily against ISIS in its last pocket, the ongoing attacks of the Turkish on our area will stop our battle against ISIS for a long time and that is what Turkey is calling for.”

“While we are fighting with all our forces to expel the ISIS terrorism from our regions and leading a war against them on the front-lines, these unjustified attacks of the invader Turkish army are indirectly helping ISIS. We affirm once again that there was not any attack conducted from our side against the borders of the invader Turkish state, and the only aim of their attacks is to create provocations and to help the ISIS terrorist structure…”

SDF and Kurdish YPG forces in Deir Ezzor are currently fighting to clear Syria’s last and well defended ISIS pocket around Hajin, their de facto capital following their expulsion from Raqqa and “where hardened terrorists who fled Raqqa and other former ISIS strongholds” are making their last stand.

“To some observers, the attacks are reminiscent of the intermittent shelling of Afrin Canton, which preceded the full-scale invasion and occupation launched in January of this year. The invasion of Afrin unquestionably aided ISIS and other terrorist groups that the international community seeks to degrade and destroy in Syria, giving formerly stable territory to Islamist militias and diverting YPG forces from the fight against ISIS in the northeast.”

The YPG also stated that they will defend Northern Syria from any threat that it may face:

“We declare that no matter from where and who it comes, no attack against the northern Syrian territory will be left unanswered, and that in this sense we have the right to defend ourselves by any means necessary.”

Talks of peace and stability accompanied by more war and destruction – ? – sounds just like an extension of the contradictions of Turkish internal policy, which despite ongoing criticism appears to be escalating rather than working to find real solutions to real problems.

The Syrian Democratic Forces, once again, have called on the international community, to respond and use their influence to curb Turkish aggression:

“We also call on the international community to condemn the Turkish provocations in the safe areas in Syria, and we demand that our partners in the International Coalition show a clear attitude and stop Turkey from launching attacks on the region and giving more chances to maintain ISIS and providing support for it.” (General Command of the Syrian Democratic Forces, 31 October 2018).

So here we are again,  calling on progressive citizens in the many NATO countries to call on their governments to stop supporting unprovoked Turkish aggression against a people struggling to rebuild their homeland after countless years of civil war and the nightmare of the Islamic State ‘Caliphate’.

From Chiapas to Rojava: seas divide us, autonomy binds us

Report from Rojava: Revolution at a Crossroads

Margaret Owen (Gender and justice in an emerging nation: My impressions of Rojava, Syrian Kurdistan, February 2014)

David Graeber (Why is the world ignoring the revolutionary Kurds in Syria? October, 2014)

“Tragically, the press of Turkey’s NATO allies is silent, at best, not only on the conflict but on the criminalization of Kurdish political activity. The silence, in my view, must be broken, and the remarkable Kurdish achievement made known to the world.”