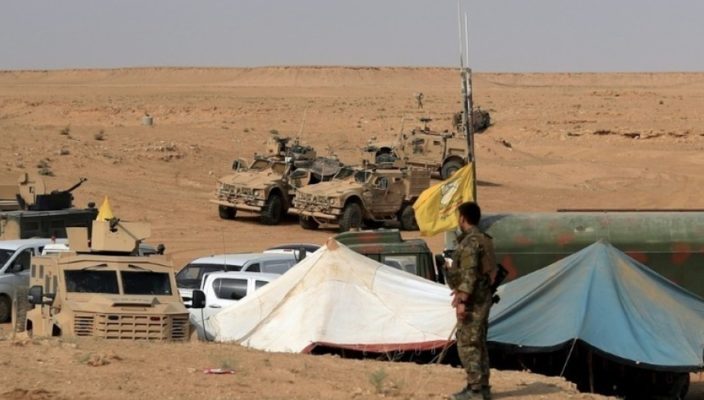 TEV-DEM Co-Presidency issued a written statement on the Turkish state’s threat to occupy Northern Syria and the US decision to withdraw from the region.
“Our people, not just in Syria, but in Middle East, – said the statement – have chosen a free and democratic life as brought about the democratic nation and will continue to struggle with all kinds of weapons, technical and economic power confident of their strength and self defence power.”
TEV-DEM statement added: “Kurds, Arabs, Assyrians and all Northern Syrian peoples have set up a free democratic system aiming at the democratic unity and for this they have given more than ten thousand martyrs. Twice as much people have been wounded. From the very first day, the inhuman mercenaries organized by the name of al-Nusra, DAESH, FSA, and their supporter, the Turkish state, have been hostile towards this democratic system and they constantly attacked it.
Not only for the peoples of Syria and the Middle East, but for all mankind, these forces that have been attacking and killing have been defeated thanks to a historical struggle, and brought to the point of ending.
Despite some cities, such as Kobanê, were completely destroyed they have found their stability, peace and freedom again thanks to the Syrian Democratic Forces and the YPG who fought for the will o the people.
The Turkish State have been providing all kinds of support to these mercenaries in order to destroy the people of Northern Syria and the democratic forces; and it actually got directly involved once it saw that the mercenaries alone could not achieve what Turkey wanted.”

Turkey hopes to regenerate DAESH
The Turkish state increased its aggression as the defeat of DAESH loomed. Turkey announced that it would attack Northern Syria precisely when the last areas in the hands of DAESH was to be liberated by the SDF.
At the same time, we saw the US attitude towards Turkey. After talking to US officials, Erdogan confirmed he would soon attack Northern Syria. It means that the US did not take the right stance and actually with its attitude encouraged Turkey to go ahead with its threats.”

A common enemy
The statement continued: “There are many examples in the history of mankind of the struggle against the common enemy. The democracy front, which included the Soviet Union against Hitler and Mussolini fascism, brought together very different political forces. A similar front was formed to counter DAESH. In the course of this struggle, the US and other countries established a coalition against DAESH and against the aggression of the Turkish state on the people of Northern Syria. This was the case. Yet, too many a time the Turkish state was allowed to carry out its dirty war in the name of one or another state.
The peoples of the Middle East, especially the Syrian peoples, and all humanity, have questioned this selfish approach.”

US gave green light to occupation
The statement added: “After the threats issued by Turkey that it will attack democracy and Kurds in Northern Syria came the announcement that the US is to sell Turkey $ 3.5 billion-worth missile and weapons. At the same time the US announced that they would withdraw their troops from Northern Syria.
All these developments raise suspicion of dirty plans and games. All over the world the message has been read clearly: The United States said Turkey ‘we’re pulling out, you can go ahead with the occupation’.

First responsible of this crisis is Turkey
TEV-DEM further stated: “It is understandable that every state and political power make decisions about themselves in a way that does not conflict with moral and human values. Of course, the question of how correct and beneficial the decision of the United States is for the people of the US and all mankind will be questioned.
US authorities have the right to make such a decision; as long as this decision is not part of a dirty plan falling on oppressed peoples.
We will not make any evaluation about the decision of the withdrawal of the US as a democratic institution belonging to the peoples of Northern Syria; because the decision is theirs.
We have already stated our political approach: we believe that there should be no external power in a democratic and free Syria.
We believe that is necessary that all foreign powers leave Syria, beginning with Turkey.
At present, the biggest obstacle to the democratization and unity of Syria is the Turkish state. They play neither a positive nor a constructive role.
On the contrary, it is the Turkish state that is responsible for the destruction of Syria and its deep political crisis and instability.
The Turkish state is not only an occupier, but it has committed the crime of genocide, which is a serious crime for humanity, for example in Afrin.”Reminding the UN of its mission
The statement continued: “The US may leave Syria. It has decided to go anyway.
However, the people of Northern Syria who are fighting against DAESH have given more than ten thousand martyrs and tens of thousands of wounded, are under the occupation attacks of the Turkish state.
What Turkey is doing is a crime according to the law and international law, by UN standards.
Syria is currently a member state of the United Nations. Although there is political instability within the borders of Syria, this is the problem of Syrian people. Internal political fight in Syria is not a matter of concern for Turkey. The situation of the Kurds and the Syrian peoples in Syria concerns the Syrian state and the Syrian people.
Turkey’s aggression completely violates international law and is ultimately an attack on a country that is a member of the UN.
In this respect, a UN emergency meeting should be convene to discuss about Turkey’s threats.
International sanctions against an attack on Northern Syria may be considered. The peoples of Northern Syria are calling on all humanity and democratic forces and institutions to push the UN into taking such a decision.
Turkey is attacking Northern Syria because it wants to prevent peoples there and in the Middle East to implement democratization and freedom.”Self-Defence resistance to win
The statement ended with a call: “This attacks are threaten to destroy the democratic system implemented in Northern Syria.
Arabs, Kurds, Syriacs and all Syrian peoples who paid with over ten thousand sons and daughters would continue to display a historical resistance.
We call on all Northern Syrian peoples to raise the struggle against occupation, to create and protect the Democratic Syria and the Free and Autonomous Northern Syria.”